Like a bristling stallion being held back at the gates Coen Hess was forced to wait an agonising 60 minutes before he was launched into the Origin arena and says he is ready to play a far greater role for Queensland in the deciding Game Three at Suncorp Stadium on Wednesday night.

Hess made just 16 metres from three runs and 14 tackles in the 19 minutes he was afforded in the Maroons' Game Two victory and former Queensland coach Mal Meninga believes it will be the respective benches that will determine who wins the series.

Writing in the Courier-Mail on Thursday, Meninga said that "Queensland had to win in Sydney with 14 men because they simply did not get enough out of their bench", a challenge that Hess said he is ready to accept.

Although he acknowledged their lack of minutes – particularly in the case of Hess – Meninga said they "should have worked hard to make the minutes they had matter" and demanded they deliver more in Game Three.

Both Hess and Tim Glasby are playing just their second Origin matches, Ben Hunt is on debut and Josh Papalii has been disappointing this series but Hess says they must step up and have an impact when they get their chances.

"Coming off the bench, it's your responsibility to maintain what the starting pack have done," Hess said.

"Sometimes you go out when the other forwards are fatigued or you go out there when they are fresh as well.

"I guess there is a responsibility there to create an impact or spark so we will be doing that." Shielded from the media in his Origin debut so that he could focus on his preparation, the 20-year-old Mount Isa monster believes he handled the hype leading into what he acknowledged was the most intense 20 minutes of football he has ever played in his life.

Hess, Glasby and Jarrod Wallace all played 25 minutes or less in Game Two and the North Queensland back-rower said he has to be ready to play a larger role should Walters require it on Wednesday.

"Yeah I guess so, I guess I will have to be," Hess said when asked if he is ready for more minutes in the decider.

"When you run out on the field it's obviously a very fast game, you have to be ready to go.

"[Walters] said to me it would depend on how things panned out but he wasn't too sure when I would get on. He also said to me on the bench not to use up too much nervous energy sitting there.

"I felt I was pretty calm on the bench just waiting for my time. I was very stoked to run out on the field when I did.

"You always hear how Origin is another beast, how hard it is, how fast it is; you can't reflect on it until you have actually been out there and done it.

"It was a very fast game, physical, and you could see the emotion in the build-up and out there on the field.

"It was everything I expected and more." 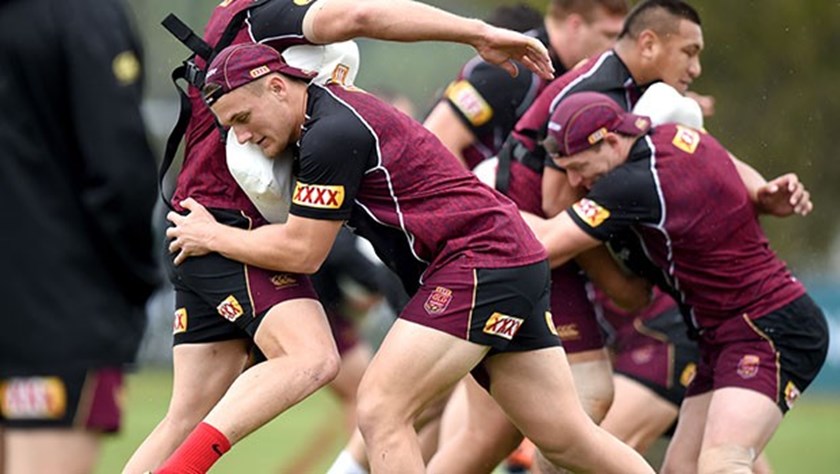 Although he is preparing for just his second Origin game for Queensland Hess represented the Queensland under-10s at Suncorp Stadium two years ago when Manly centre Brian Kelly scored four tries in New South Wales' 32-16 win.

Such has been his rapid rise into the senior ranks Hess couldn't actually remember whether he had played for a Queensland representative team at the state's spiritual home of rugby league and knows what it will mean to he and his family on Wednesday.

"Being a home ground there is obviously going to be a lot of support for us," Hess said.

"Even down in Sydney you could see the hype around town.

"To be in your home state getting the support of the fans will be one of my proudest moments."