Cowboys.com.au are providing an in-depth positional analysis of the 2021 North Queensland Toyota Cowboys squad. We continue the series with the middle forwards headlined by internationals Jason Taumalolo, Josh McGuire and Jordan McLean.

McGuire enjoyed another stellar season in his second campaign in Cowboys colours. The 30-year-old ran for at least 100 metres in all but one game in 2020 and was just as impressive on the defensive side of the ball with a tackle efficiency rating of 91.5 percent. McGurie is one of the unquestioned leaders of the Cowboys forward pack and is set to play a major role again in 2021.

Coming off a record fifth consecutive Paul Bowman Medal for Cowboys Player of the Year, Taumalolo remains at the peak of his powers as the dominant lock in the NRL. Elevated to co-captain alongside Michael Morgan for 2021, Taumalolo may take his game to an even higher level shouldering extra responsibility.

Along with Taumalolo and McGuire, McLean is one of the most important pieces of the Cowboys forward pack. One of the best defensive middles in rugby league, McLean again finished inside the top 10 in the NRL with a 94.3 tackle efficiency. Injuries have limited McLean in his three years in North Queensland, but when on the park the 29-year-old has been one of the Cowboys best.

Brought to North Queensland by new Cowboys Head Coach Todd Payten, Burr enjoyed arguably the best season of his career in 2020. The 28-year-old was outstanding for the Warriors during their late season resurgence, averaging 88 metres and 24 tackles a game. Burr adds further depth to an already talented middle forward rotation.

In the rugby league wilderness for two years before moving to North Queensland, Molo has undoubtedly been one of the Cowboys’ success stories of recent seasons. The 26-year-old has played every game over the past two seasons, going from stints of 10 minutes or shorter in 2018 to a regular starter in 2020. Molo will again play a major role in the Cowboys middle forward rotation in 2021.

Needing just one appearance to notch 50 in Cowboys colours, Jensen played some of the best football of his career late in 2020. Jensen played just two games in the first 14 rounds, but was recalled in Round 15 and remained in the side for the remainder of the season, including a start at prop in Round 19.

Renowned for his hard-edged play on the field and professionalism off it, Gilbert was thrust into the NRL spotlight as a 19-year-old in 2020. Gilbert played the first seven games of his career from the interchange, coming on as a middle forward. In Round 16 against Cronulla injuries forced Gilbert to the second-row and he wouldn’t relinquish the position for the remainder of the season, starting on the left-edge in each of the final four games.

Just as Hola looked to be nailing a spot in the Cowboys’ forward rotation injury struck in 2020. The towering 21-year-old fractured a wrist during a Round 9 clash with the Roosters and wouldn’t return to the park again for the season. Hola has indicated he will spend time at second-row during the pre-season.

After three seasons toiling away in the Queensland Cup, Pere finally made his NRL debut in 2020. The 22-year-old tasted two games in the top grade and will be gunning for a bench spot early in 2021.

A hulking Kiwi-born product, Greig was unfortunately limited to just one game of rugby league in 2020 due to the COVID-19 pandemic. The 21-year-old graduates to the Cowboys top 30 in 2021 and will look to push for an NRL debut.

A former Junior Kiwis star, Neame enters his first season as part of the Cowboys NRL squad. A towering 19-year-old, Neame will spend 2021 on a development contract and will look to nail down a regular Queensland Cup spot early in the season. 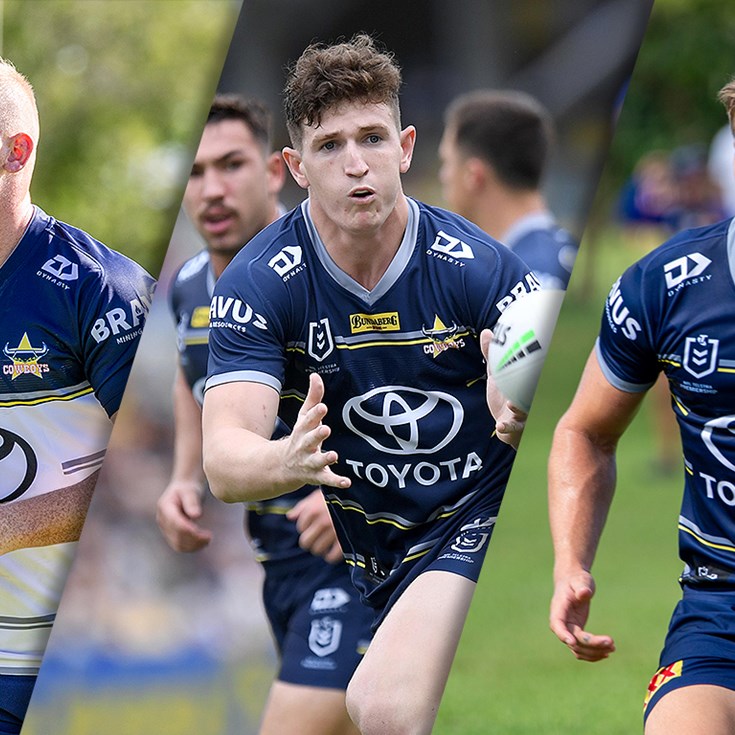