What a difference seven days can make.

The Cowboys out-muscled, out-enthused and outplayed the Knights in a first-half masterclass on Saturday to set up a 32-20 win that snapped a three-match losing streak.

Enforcer Josh McGuire took aim at his team in the media during the week, telling them to raise their standards in no uncertain terms, and the initial response couldn't have been more emphatic against the previously high-flying Knights at Queensland Country Bank Stadium.

Only a week after conceding 34 first-half points to the Wests Tigers, North Queensland posted 26 unanswered points in a near-perfect opening 40 minutes.

Newcastle clicked into gear after the break, notching four tries as Kurt Mann and Kalyn Ponga gave the hosts a fright, but the gap was ultimately too great to bridge.

Knights coach Adam O'Brien was diappointed in his team's defensive resolve and conceded "complacency" and a "lack of grit" hurt them.

"We had a nine-day turnaround [between games] so we gave some players time off, which they deserved," O'Brien said.

"... But I reckon it probably set the tone for our week. We weren't prepared to roll the sleeves up and credit to the Cowboys, they were.

"They were willing to fight really hard for everything and I just think we wanted to get to the end result too quick."

Asked what he was most unimpressed with, O'Brien said: "Our contact, our stick. I thought the Cowboys rolled our middle. They ran hard, I'll give them credit on that.

"And our kick finishes, I think every time we didn't get to a kick in the first half ended up being a try [conceded]."

The victory keeps North Queensland right in the finals hunt. They still have stars Valentine Holmes, Michael Morgan and John Asiata to return in the coming rounds.

Everything Paul Green's men did had intensity early on, from chasing kicks to scrambling in defence, winning the ruck battle and punching holes in the Newcastle wall that had been so sturdy.

Bolstered by the return of prop Jordan McLean from a calf injury, North Queensland's forwards steamrolled their in-form counterparts to begin with.

Lock Jason Taumalolo and McGuire led the charge with 297 and 174 metres respectively.

"The thing about Jason is the thing that carries him for 297 metres is his legs. So I think taking them off him would be a start," O'Brien said.

The Cowboys recorded 933 run metres compared to Newcastle's 657 in the first half alone.

Clifford carves up the Knights

The duo guided the team with aplomb and their in-play kicking was strong, often finding touch to minimise the impact of Knights No.1 Ponga.

It seemed like another wretched outing was on the cusp for North Queensland when fullback Hamiso Tabuai-Fidow dropped a bomb while looking into the sun. This time, they displayed the resilience that coach Green had been crying out for to deny Newcastle.

The Cowboys repelled another early raid before capitalising on a Knights error to score via left winger Justin O'Neill. It was the first time in four weeks that Green's men had posted first points.

The Cowboys strike first through O'Neill

They pressed the advantage with a Kyle Feldt penalty goal in the 16th minute.

Continuing to roll through the shell-shocked Newcastle with quick play-the-balls, the Cowboys surged further ahead when impressive hooker Reece Robson burst into the clear and sent Tabuai-Fidow galloping under the posts for his maiden NRL try.

The spine was well and truly on song, with halfback Clifford next throwing a dummy 20 metres out from the line and shrugging off four defenders to find the in-goal.

Winger Feldt latched onto a pinpoint Clifford bomb to close out the half with his ninth try of the season – currently the most in the competition.

Hoy backs up through the middle

The Knights struck four minutes into the second stanza to inject themselves with some much-needed confidence. A lovely tip-on from Herman Ese'ese put second-rower Lachlan Fitzgibbon in the clear and he linked with the supporting Tex Hoy for his first NRL try.

However, the Cowboys responded promptly as Tom Opacic threw a skilful, flat offload to allow Coen Hess to etch his name on the scoresheet.

Having been mostly ineffective for much of the game, Ponga's class came to the fore as he shovelled a magic pass on for Hymel Hunt to cross in the corner.

And Knights five-eighth Mann bagged his side's third try shortly afterwards, stepping off his right foot and then willing himself to plant the Steeden down despite heavy attention.

Esan Marsters looked to have given North Queensland some breathing room amid Newcastle's surge but the try was disallowed due to an obstruction.

Justin O'Neill was denied his double at the death for another obstruction and instead the Knights further reduced the margin through Gehamat Shibasaki off the back of the penalty.

There was late drama as Ponga was tackled without the ball close to the try-line by Drinkwater. The Bunker decided against a penalty try, and while Drinkwater was sin-binned for the final 58 seconds, the Cowboys claimed a relieving victory. 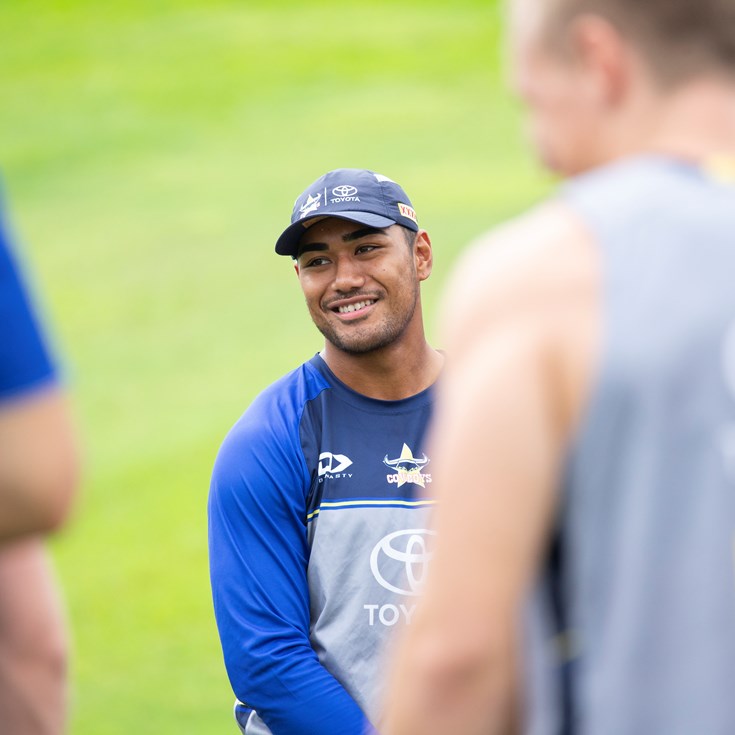 Hopefully we made our fans proud: Green