There is rarely a dull moment when the Melbourne Storm take on the North Queensland Cowboys, two of the competition heavyweights over the last few seasons.

Melbourne and North Queensland are littered with an array of talent and they will need all of it to overcome the defensive tenacity and desire that their opposition possess.

Recently, the Storm have had the Cowboys' measure but with a rampant Johnathan Thurston back to his best with five try assists in two games this season, North Queensland will be out to impress.

Both sides are coming off defeats with Melbourne stunned at home by the Wests Tigers in Billy Slater's 300th game while the Cowboys were beaten in yet another thriller against the Brisbane Broncos.

The key match-up: Jesse Bromwich v Matt Scott. Arguably the two best front-rowers in the game. Bromwich is getting back to his best form while Scott is easing back after missing most of last year with a serious knee injury. The Kiwi and Kangaroo enforcers will be keen to dominate each other early.

For the Storm to win: Melbourne must reduce their errors and improve their defence. Their first two performances can best be described as 'muddled' and coach Craig Bellamy will be certain to address what's gone wrong ahead of Thursday night.

For the Cowboys to win: Denied by a goal post last round against the Brisbane Broncos, the Cowboys don't have to change a lot – they could easily be sitting two from two. With the two packs fairly similar in skill and experience, it's their backline – headed by Johnathan Thurston and a returning Michael Morgan – that must control the game.

Storm Stat Attack: Usually it might take Melbourne three games to miss 38 tackles. They achieved that tally in one match against the Wests Tigers on Saturday night. Cameron Smith's men also only had 36% of the footy which isn't enough to win most matches.

Cowboys Stat Attack:JordanMcLean ran for a game-high 161 metres last round. Expect the former Storm prop to try and dictate terms alongside Scott in the front row.

And another thing: The Storm are on a six-game winning streak against Thurston's team. North Queensland's record at AAMI Park is two wins out of six.

In a game day switch, Kenny Bromwich is out of the Storm squad, with his spot in the 17 taken by Brandon Smith. Bromwich, Billy Walters, Young Tonumaipea and Tui Kamikamica were the four omissions from the 21-man squad named on Tuesday.

The Cowboys will start the match 1-17, with Corey Jensen and Enari Tuala the final two men to drop off the interchange bench. Michael Morgan has been named to make his return from an abdominal strain, pushing Te Maire Martin to the bench and Corey Jensen to the reserves. Coen Hess moves into the starting side for Ethan Lowe. Kyle Laybutt and Francis Molo were dropped from the squad 24 hours prior to kick-off. 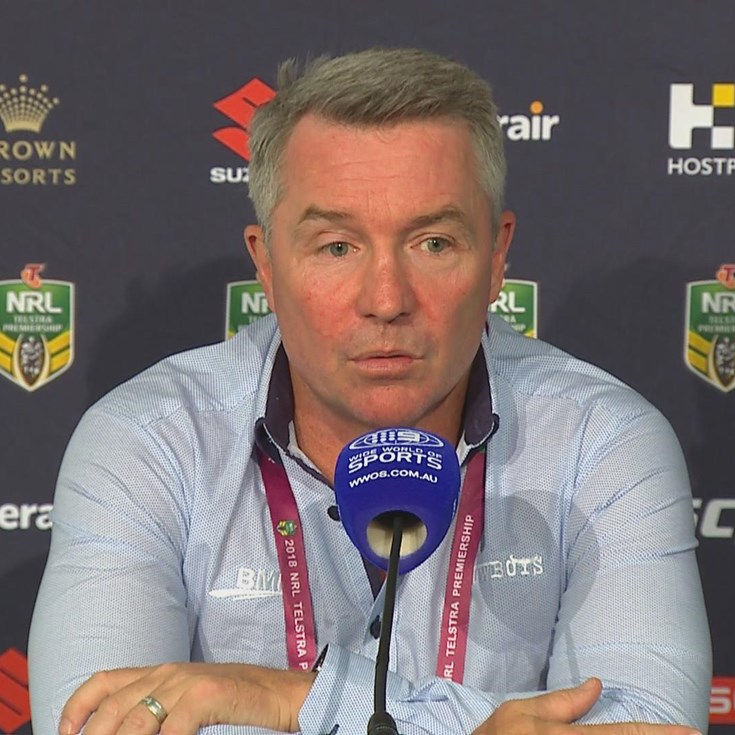 Effort not enough to overcome Storm

Storm prove too good for Cowboys

Cowboys hit back through Hess