Even a two-try haul by North Queensland bulldozer Coen Hess wasn't enough to stop Melbourne Storm from again silencing the Cowboys 30-14 in their grand final rematch on Thursday night at AAMI Park.

It wasn't as savage a defeat as Storm's 34-6 margin to claim the 2017 Telstra premiership five months ago, but it was enough to put Storm back in the winners' list after dropping a game to Wests Tigers a week ago.

It was often ugly and riddled with errors – referee Matt Cecchin blew 20 penalties - but the Storm eventually overpowered the Paul Green-coached Cowboys in the final 20 minutes, scoring four-tries-to-two.

Storm contained the Cowboys' star halves pairing of Johnathan Thurston and Michael Morgan, who were playing their first regular competition game together after Morgan missed the opening two rounds through injury.

But despite some nice touches, the Thurston-Morgan combination failed to stamp their influence on the game.

Cam Smith and Thurston traded penalty goals inside the first 10 minutes as both sides were guilty of infringements around the ruck.

Storm were in front in the 16th minute after a Joe Stimson hit-and-twist try, and Smith added the conversion for an 8-2 lead.

Suliasi Vunivalu, in his 50th NRL match, then showed his freakish talent with a bust upfield but the Fijian winger butchered a certain try with only Cowboys fullback Ben Hampton to beat. Josh Addo-Carr was available on the inside but Vunivalu passed too late and the play broke down.

Smith added another two from handy range to take a 10-2 lead, but handling errors continued to blot the Storm's attack just as the home side started to make inroads.

After Brodie Croft kicked out on the full, suddenly the Storm were threatening to beat themselves in a frustrating first-half display.

Second-rower Coen Hess burst in between Cameron Munster and Ryan Hoffman to score in the 26th minute, and after Thurston's conversion, the visitors trailed by two.

This work was undone by Morgan who kicked into touch on the full. After working their way up the field, Smith hit Christian Welch with a short pass and the interchange prop crashed over for his first NRL try.

Smith then kicked a penalty goal to give his team an 18-8 lead at the break.

The Cowboys continued their push into Storm territory after the home side conceded three back-to-back penalties, with the weight of possession finally telling.

They required something special to crack Melbourne's defence and Hess obliged. His angled run from close to the line proved too much for the Storm to handle.

Thurston's goal closed the deficit to 18-14 with 25 minutes left to play.

Another Vunivalu error - this time trying to play the ball too quickly on tackle one - gave the Cowboys a chance but they couldn't finish their set.

Smith slotted his fourth penalty kick from close range and a 20-14 lead.

The Storm only put the result beyond doubt after Will Chambers crossed from dummy half and Nelson Asofa-Solomona crashed over from close range with time almost up. 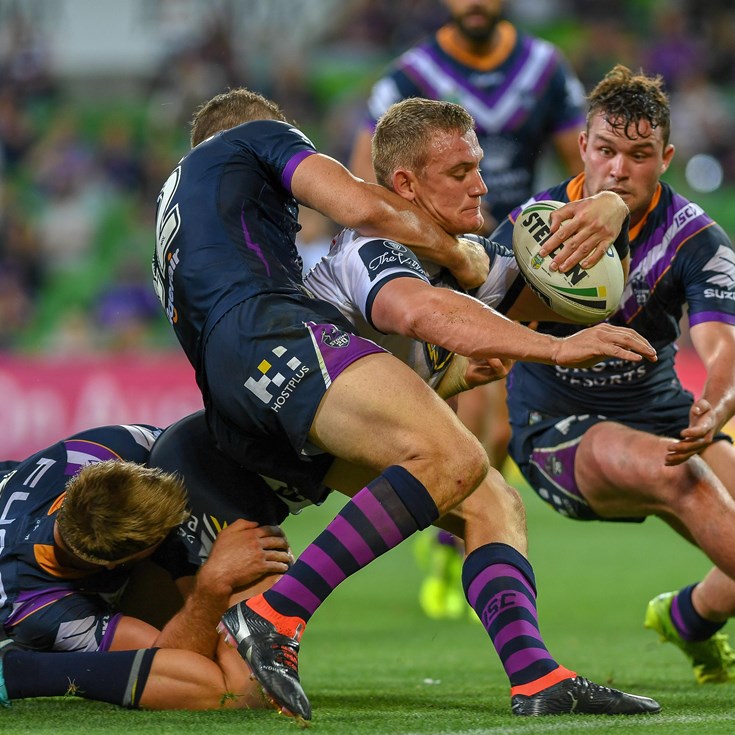