The North Queensland Toyota Cowboys are still swinging, having got back up off the canvas yet again, and are refreshed and re-energised as they return to their home base for an epic Round 24 National Rugby League showdown with defending premiers the Cronulla Sharks on Saturday night.

Having lost their past three games, the Cowboys know the stakes are rising with each passing week as the 2017 NRL finals series looms large.

A win against the Sharks at 1300SMILES Stadium not only arrests the lean patch – the club hasn’t lost four in a row in the Paul Green era – it all but locks the team into the post-season.

But with a crowded ladder around the bottom half of the top eight, every win for the remainder of the regular season is golden.

Of the three teams currently on 28 points – the Cowboys, Panthers and Sea Eagles – North Queensland has the worst points differential with +36, to Manly’s +37 and Penrith’s +59.

What that means is that 32 competition points – or two wins from their last three regular season games – will be the only result that will unequivocally ensure the team makes the post-season for a seventh straight year.

It all starts again on Saturday night though, with Green and his football staff negotiating another injury-plagued week out of the Round 23 loss to Penrith, with Justin O’Neill (elbow) and Shaun Fensom (knee) joining the long casualty list.

The team will welcome the return of five-eighth Te Maire Martin (knee), who missed the Panthers game, while fullback Lachlan Coote (multiple minor injuries) and Michael Morgan (concussion) also look set to play after being a little worse for wear out of last weekend.

And with Gavin Cooper (calf) and Antonio Winterstein (hamstring) eyeing a return in a week or two, the club remains optimistic of a strong finish to the home-and-away portion of their 2017 premiership campaign.

So with that glass-half-full outlook following another torrid and draining match, the Cowboys responded the only way they can – with positivity and continued hard work on the training paddock this week as Green introduced new combinations to the mix.

Centre Javid Bowen and teenage whiz Kalyn Ponga will likely line up on that left edge, while Kane Linnett will switch to O’Neill’s right centre spot alongside winger Kyle Feldt.

The veteran Linnett this week spoke of the need for all team members to be locked in to the task at hand – beating a hungry opponent with plenty to lose.

“We’ve just got to put out a strong 80-minute performance because we know that the Sharks – who themselves are coming off a couple of tough losses – never throw the towel in."

“That’s the team they’ve been for a while now and we all know they will come hard at us for the entire match. We all know what happened last time we played them – they rolled right over the top of us in that second half.” 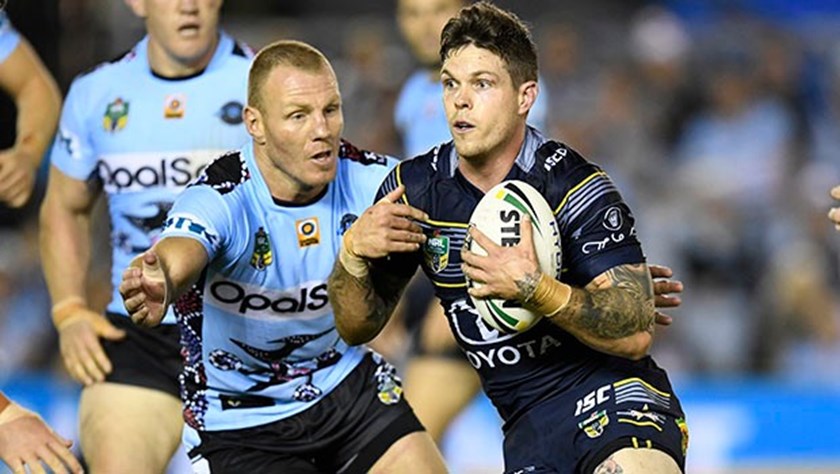 Linnett was referencing the May 18 showdown earlier in the season when the Cowboys let slip a 14-0 half-time lead to lose 18-14 as a second-40 Shark-nado overwhelmed the visitors at Southern Cross Group Stadium.

The hosts piled on three tries in 16 minutes with conversions proving the difference on the night.

In fact, the Sharks have had the recent wood on the Cowboys, winning five of the past encounters between the sides, including the last three on the trot: that Round 11 thriller; last year’s 32-20 preliminary final win en route to their maiden NRL premiership; and a 13-10 victory at Cronulla in Round 14 last year. His pass to Townsend led directly to the Sharks’ second try of the match, with winger Sosaia Feki putting the home side ahead four minutes later for what turned out to be the match-winning try.

In an ominous-looking stat line for the match, Fifita ran 175m from 16 runs in 48 minutes of game time.

Eighty-nine of those running metres were post-contact, he had 10 tackle busts, a line break, three offloads and 29 tackles.

Cowboys hooker Jake Granville said that while the entire Sharks forward pack would be a handful on Saturday night, Fifita did present a challenge, especially if he had his confidence up.

“Fifita’s one that we’ll have to keep an eye on,” he said, “He’s got a strong carry, can use a bit of pace to skip across three or four defenders and look for opportunities there, plus he’s got that offload that he pulls out now and then.”

The crafty No.9 – one of the Cowboys’ best during this challenging past month – said the effort from the team was there, with a bit of polish needed to turn close losses into wins.

“Everyone’s putting in 100 per cent, and we just need to connect a bit better out there on the field.” 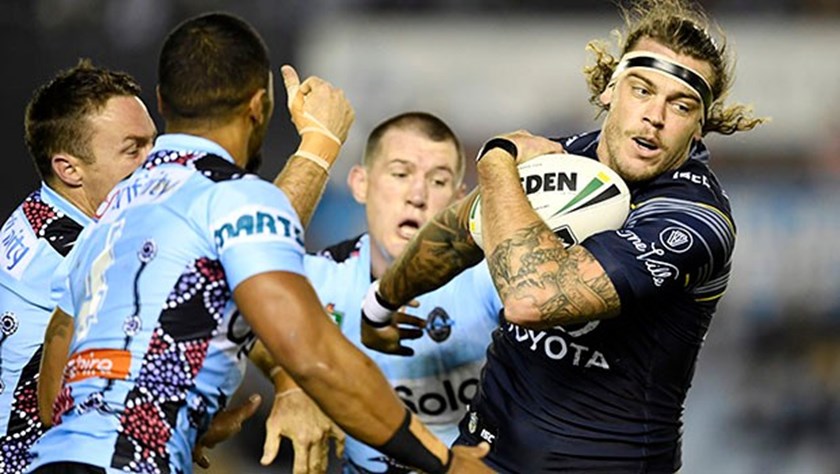 Another fearless warrior for the Cowboys in recent weeks has been back-rower Ethan Lowe.

Playing on that right edge, normally, Lowe has had to be adaptable of late, with stints in the core as well as in the centres as football staff look for quick fixes on the run as the injury toll mounts.

“I’ve had to play lots of different positions, and it’s been tough and a bit of a challenge, but I’m here to do whatever helps the team,” Lowe told Big League post-Panthers match last Saturday.

“If I have to be in the centres, or in the middle, it doesn’t really bother me. It’s team-first and everyone has that mentality.”

No-nonsense prop Scott Bolton will mark 200 NRL/Cowboys games on Saturday when he runs out on to the field against the Sharks, and in doing so will be the sixth Cowboy to reach the milestone.

The 200 games-played achievement triggers Cowboys life membership and is a fitting tribute for one of the club’s unsung heroes.

A key member of that 2015 premiership-winning team, Bolton has stepped up his minutes in 2016, even captaining the side on occasions.

And while Bolton won’t want to make a fuss of the night – preferring to make it about the team’s performance – rest assured his teammates appreciate his value and contribution to the group.