They showed plenty of defensive resolve but the North Queensland Toyota Cowboys’ NYC squad weren’t able to end their away game commitments in 2014 with a win against South Sydney at ANZ Stadium tonight.

There were just two tries in each half as the 10th-placed Rabbitohs won 16-4 to stay in the race for the top eight – a goal that went beyond the 12th-placed Cowboys five nights ago when they lost to Penrith.

Rabbitohs centre John Olive collected a double in the first 20 minutes to get his team on the front foot. The first try came from a perfectly weighted, final-tackle grubber kick and the second after a bad miss in defence from the Cowboys just inside their own half.

The Cowboys did well to repel a couple of sets on their own try line and they should have posted the next points.

Second-gamer Jared Verny made good inroads into Souths’ half and Q would have scored on the next play had Hayden Crowley not spilt a pass with the line open.

With their completion rate at a meagre 50% (five from 10) compared to the home team’s near-perfect 12 from 13, the Cowboys were constantly under pressure.

The Rabbitohs were held up over the try line on three occasions by last-gasp defence in the first half, including a fantastic effort from Verny on opposing fullback Devon Makoare-Boyce who looked certain to score his team’s third try.

Ben Mathiou lost control just short of the try line in the 33rd minute in another near-miss for North Queensland, who finished the half without a point but still in the game, trailing 10-0, thanks to their goal-line defence. 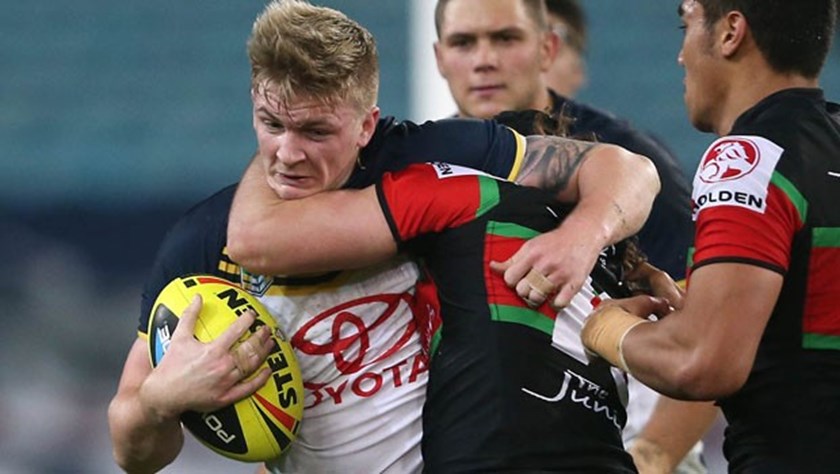 In a rare NYC defensive duel featuring few scoring opportunities, the first try of the second half didn’t arrive until 13 to go when, after repeat sets, the Rabbitohs built numbers to the right and winger Sam Manuleleua crashed over to make it 14-0.

Soon after, NQ finally opened their account thanks to good hands from Yamba Bowie, Jack Kelleher and finally Jared Verny, that sent Crowley over in the corner.

North Queensland will return home for back-to-back matches to end their season, starting with a match against Cronulla at Townsville Brothers on Saturday evening.