Townsville artist Jesse James hopes his winning design featured on the Toyota Cowboys’ 2021 Indigenous jersey will inspire unity, pride and respect as North Queenslanders get their first look at the special round jersey today.

Entitled “Aboriginal and Torres Strait Islander Dreamtime Unity”, Jesse’s design was chosen from entries from the club’s 2020 design competition, after COVID-19 restricted a stand-alone competition for this year’s Indigenous jersey.

The team will proudly wear Jesse’s design in their Indigenous Round home game at Queensland Country Bank Stadium on Friday 28 May, with the match-worn, player-signed jerseys to be auctioned after the match in support of the Cowboys Community Foundation.

Jesse says his design represents the strong connections between the Aboriginal and Torres Strait Island peoples. 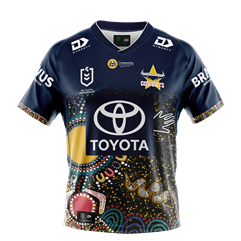 “My inspiration was my connection to my Aboriginal heritage and also wanting to represent both Aboriginal and Torres Strait Islander peoples’ connection to our Dreamtime stories, both united and walking in one direction together.

“I want to show people that when we all work together, understand our differences and walk together as one people, life becomes so much easier for everyone.

“I also want to encourage other young artists out there to keep trying and having a go. Putting yourself out there for people to judge your talent is hard, but determination, your inner spirit and pride will keep you moving forward,” he said.

The jersey, now available for pre-order from the Cowboys Team Shop, exclusively features the Cowboys Community Foundation branding in the sternum position, thanks to major partner Diageo Australia.

Diageo Australia have continued their generous contribution of giving up their 'Bundaberg Rum' branding position in support of the Foundation and its work in providing access to education for remote Indigenous students through NRL Cowboys House.

Strong connections between two cultures – the Rainbow Serpent and Kangaroo are strong in the Aboriginal culture’s beliefs, as is the Turtle and Dugong in the Torres Strait Islander culture.

Jesse James is a self-taught artist who has been painting for the last eight years, describing his artworks as always representing traditional Aboriginal painting combined with his own colourful pieces and take on new techniques.

He loves doing personal pieces and showing his connection to his home of Palm Island, in a brighter way.

Jesse is a proud Bwgcolman, Birri-Gubba and Mamu man and pays respects to the Wakka Wakka peoples from Cherbourg where he grew up.

“To have my artwork chosen for the 2021 Cowboys Indigenous jersey was a blessing and I am very grateful for the opportunity to have the boys running out in my design come Indigenous Round.

“It’s a proud moment for me as all of my family know how much I support the Cowboys.

“I will feel privileged to be part of it and see my artwork being represented as a part of myself, my home Palm Island, Cherbourg and my people.”

Pre-orders for the 2021 Indigenous jersey can be made through the Cowboys Team Shop, cowboysteamshop.com.au, with the jersey expected in-store in late April.