Harry Grant is expected to make his Wests Tigers debut in Saturday’s match against Cronulla at Bankwest Stadium after joining the club in a protracted player trade with Paul Momirovski before the competition shut down in March.

The former Melbourne Storm hooker has impressed teammates since training resumed three weeks ago and Tigers captain Benji Marshall said on Monday that he was looking forward to playing with him.

“He has got a great pass out in front, he does a lot of work on it, his front-on contact is pretty solid and as a hooker one of your strengths you need to have is the ability to count numbers and pick the right way to go. Nine times out of 10 he just nails that without a call,” Marshall said.

“I feel like he will add a lot to our team and he has obviously been in a great system where he knows how to play and he has been under a guy called Cameron Smith, who has probably rubbed a lot off on him. I feel he will bring that to our team.

“The combination between hooker and half is probably the most important, obviously getting the ball at the right time, whether you want it off the ground, whether he picks it up and takes a couple of steps to engage the markers.

“I feel like he is ticking all the boxes for me in terms of getting it at the right time and in the right place, which is important for a hooker.”​

Marshall keen to get fans back in stands

Broncos enforcer Matt Lodge came through Sunday's fitness test in good shape with a final call to be made by Tuesday on whether he returns from a knee injury to face Parramatta on Thursday.

Lodge has recovered well from what was at one point feared to be a season-ending ACL rupture to be in contention for a return to Brisbane's front row for the season's restart.

Coach Anthony Seibold may use Lodge from the bench in Thursday night's blockbuster, or hold fire and give him more minutes in next Thursday's clash with the Roosters.

Reed Mahoney's foot injury before the break was Parramatta's biggest concern, although the dummy-half said on Channel 9's Footy Show on Sunday he was certain to return.

Panthers forward Isaah Yeo on Monday gave young halfback Matt Burton a ringing endorsement as he prepares to fill in for the suspended Nathan Cleary. "He's an exciting talent and I think he will do a wonderful job for us in the first two rounds," he said.

Storm prop Tui Kamikamica has been struggling with a back injury but looks set to suit up for Saturday's showdown with Canberra. Melbourne assistant coach Jason Ryles on Monday said the Fijian prop had been placed in cotton wool to ensure he would be right for the team's restart to the Telstra Premiership season.

Souths star Cody Walker's two-game suspension for an off-field incident opens the door for Troy Dargan to partner skipper Adam Reynolds in the halves. Walker has been banned by the NRL Intergrity Unit over an incident at Casino in December in which he was filmed kicking a man in a street fight.

McCullough happy to be 'new kid on the block'

Brisbane veteran Andrew McCullough is in line to replace the injured Jayden Brailey as Knights hooker after getting a release from his 2020 contract, effective immediately, to sign with Newcastle. Having lost Brailey for the season due to an ACL injury, coach Adam O’Brien said the addition of McCullough to the Knights roster will go a long way to help fill the void given the length of the season.

NRL.com has analysed how each squad is shaping up heading into the proposed return date based on their teams for the first two rounds and the players who will now be available following the competition's break due to the COVID-19 pandemic.

Broncos: They will be without Tevita Pangai jnr (suspension) for a further three weeks and David Fifita (knee) for at least one match but are set to welcome back Joe Ofahengaue from a club-imposed two-game suspension.

New captain Alex Glenn is expected to play his first game of the year after overcoming a hamstring issue. Brodie Croft (shoulder) and Corey Oates (ribs) are available after copping knocks in March.

Matt Lodge is on track to make an early return from his partial ACL tear. Lodge is still not certain to make a comeback with a final decision likely on Tuesday.

Canberra are hopeful of John Bateman overcoming a shoulder injury after surgery in February but the English forward said he was doubtful over whether he will be right to go. Even if he is not right for the May 30 meeting with Melbourne, his imminent return is a huge advantage for the 2019 grand finalists ahead of a likely shortened season.

Suspended forward Hudson Young appears the only player in the senior squad to be disadvantaged by the competition's hiatus with his round six return meaning he still has an extra three weeks on the sidelines.

There has been a lot of movement for the Canterbury squad over the league's break with Corey Harawira-Naera and Jayden Okunbor officially deregistered by the NRL.

The loss of the pair compounds news Joe Stimson may not play again this season after needing to undergo a shoulder operation, which has been delayed because it is not essential surgery. However, the club may receive a major boost on the paddock with Kieran Foran edging closer to a return from a shoulder injury.

Marcelo Montoya will miss 8-12 weeks after suffering a hamstring injury at training. Kerrod Holland is due back from injury but may not force his way back into the 17 immediately.

Big winners out of the game's break, Cronulla are set to enter round three with three of their gun outside backs returning in Matt Moylan, Josh Dugan and Bronson Xerri. The trio missed the opening fortnight of the competition in March but the extended layoff has helped with their rehabilitation. Sione Katoa, Will Kennedy and Billy Magoulias are the likely players to drop out of the 17 but provide vital depth for the squad.

AJ Brimson is out indefinitely so Phil Sami will reclaim the fullback position. Young forward Keegan Hipgrave has been cleared to return after a series of head knocks. English centre Kallum Watkins has been granted a release to return to the UK for personal reasons.

Brian Kelly and Bryce Cartwright are available for selection again after resolving their flu vaccination issues but the second-rower may struggle to make the game-day 17 due to the Titans' armada of NRL standard forwards, particularly with Hipgrave cleared to make his comeback.

Manly are likely to be boosted by the return of Taniela Paseka after he picked up an ankle injury at the NRL Nines in February. It's otherwise a fairly settled squad on the Northern Beaches. Luckless outside back Albert Hopoate will also be nearing a return from an ACL injury he suffered last June.

Coach Craig Bellamy will have a decision to make around his centre options with the arrival of Paul Momirovski. The make-up of the bench could also change with Christian Welch due back from an ACL injury.

A few changes expected for the Knights in round three with Kalyn Ponga suspended and long-term injuries to Mitchell Barnett and Jayden Brailey. Local product Tex Hoy is set to receive a call-up for his debut in the No.1 jersey after impressing at the NRL Nines.

Connor Watson appeared the likely replacement for Brailey but the signing of Andrew McCullough means the Broncos veteran is a strong chance to wear the No.9 jersey. Sione Mata'utia will be available after overcoming a knee injury in the trials.

David Fusitu'a is unavailable after his relocation to Australia was delayed due to personal reasons. Jazz Tevaga (knee), Adam Keighran (knee) and Leeson Ah Mau have suffered training accidents and will be sidelined long term.

A fairly settled squad for Paul Green with no injuries or suspensions at the Cowboys leading into round three apart from skipper Michael Morgan (shoulder). He will miss the first few rounds after undergoing surgery. Jake Clifford is set to partner Scott Drinkwater in the halves.

Reed Mahoney's foot injury before the break appears to be Parramatta's biggest concern, although the dummy-half will be close to a return. Eels coach Brad Arthur is confident he will be right but he has Ray Stone, Will Smith and Rhys Davies as back-up options at hooker.

Parramatta forward Nathan Brown will miss rounds three and four after copping a dangerous conduct suspension before the hiatus with Peni Terepo the likely replacement.

Matt Burton looms as the likely halfback for Penrith when the competition resumes after Nathan Cleary accepted a two-match ban for breaching social distancing rules. Burton is likely to partner Jarome Luai in the halves for Ivan Cleary's team.

The Panthers are expected to welcome back Dylan Edwards from an ankle injury after the fullback fell short of a round two comeback prior to the competition's suspension. His return should mean Caleb Aikens reverts to the reserves list.

Former Shark Kurt Capewell is also set to play his first game of the year after overcoming a quad complaint. Jack Hetherington faces another week on the sidelines through suspension.

There are doubts over James Roberts's availability after the star centre entered a facility to deal with health issues. If he doesn't play, Alex Johnston is likely to come onto the wing with Campbell Graham heading into the centres. Latrell Mitchell is set to stay at fullback.

"I'm not too sure about Jimmy, we haven't made a decision with that yet," skipper Adam Reynolds said on Monday. "He's only had the one training session with us but he was happy and smiling at training, that's the most important thing. Latrell, I think you'll find in the No.1."

Cody Walker's two-game suspension for an off-field incident opens the door for Troy Dargan to partner skipper Adam Reynolds in the halves.

They will welcome back Cameron McInnes, Tariq Sims and Korbin Sims. The return of McInnes looms as the biggest inclusion with Issac Luke expected to shift to the bench and offer a utility role. The early season form of Tyrell Fuimaono should keep him on the interchange ahead of the likes of Jacob Host and Josh Kerr.

Veteran skipper Boyd Cordner will be back after his two-week rest turned into a two-month layoff following fears around his workload over the off-season. His return should mean the premiers are just about back to full strength, while the arrival of Josh Morris only adds to the back line. Nat Butcher missed the round-two clash but is expected to be available for a return.

Coach Michael Maguire is set to start Adam Doueihi at fullback in a number of positional changes when the NRL restarts. Moses Mbye is set to return from a knee complaint in Doueihi's centre spot with the former Rabbitoh's switch to fullback sending Corey Thompson to the wing.

The arrival of Harry Grant is also going to put further pressure on Billy Walters and Josh Reynolds around the dummy half position with Brooks returning, while injured hooker Jacob Liddle is nearing a return from an ACL rupture. The likes of Michael Chee-Kam, Matt Eisenhuth and Robert Jennings could remain in the reserves. 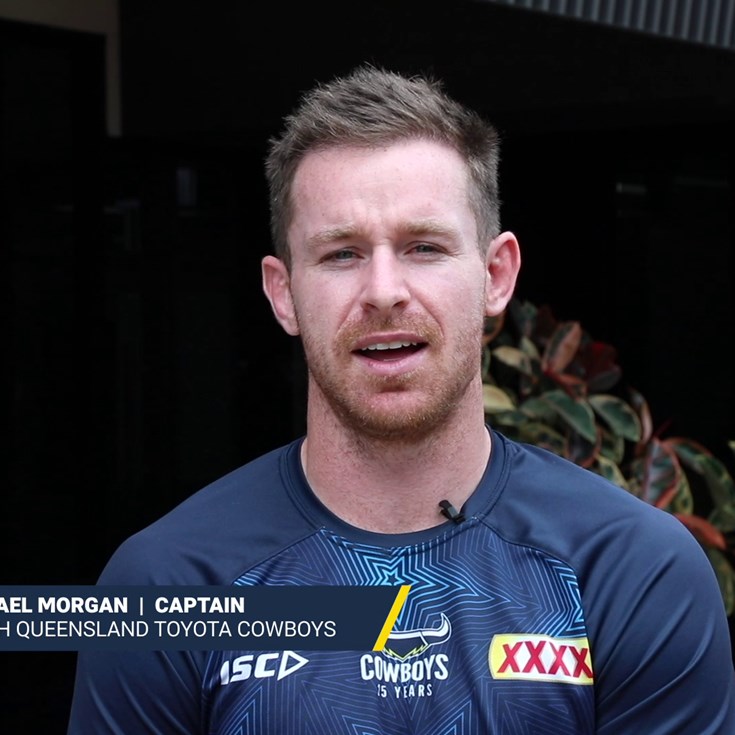 Morgan: It's a career most dream of

Taumalolo: You are one of the greatest to put on the jersey

Green: You were the player everyone wanted to play with