Pearce had been challenged by Knights coach Nathan Brown to focus on his own game, and Ponga had been criticised for laughing with opponents on the field after Newcastle’s 20-14 loss to Parramatta seven days earlier.

But when their teammates needed their leaders to stand up, Pearce and Ponga delivered inspirational performances to help the Knights end a six-game losing streak and climb to ninth on the ladder on 20 points, just two behind eighth-placed Penrith.

Newcastle’s seven-tries-to-one victory improved their for-and-against points difference from minus-21 to plus-15, taking them past the Sharks (20), Wests Tigers (20) and Warriors (19), though the Sharks and Warriors have games in hand.

The Knights face Wests Tigers in another pivotal game at Campbelltown next Saturday night.

Apart from scoring two tries of his own, Pearce threw the final pass for back-rower Mitchell Barnett to stroll over and touch down in the 61st minute.

Sione Mata’utia crossed six minutes later in the same corner of the ground, then Mason Lino took advantage of a late Barnett off-load in the 73rd minute to score Newcastle’s seventh try. Lino converted all seven tries for a personal haul of 18 points.

Ponga scored his second try a minute before half-time to give Newcastle an 18-6 lead at the break.

The Knights dominated the early and latter stages of the first half and should have led by more but could not convert all of the chances they created.

Pearce does it on his own

Newcastle squandered an early chance when Connor Watson broke the line in the second minute and found clear space but he made a meal of the last pass for Ponga and threw it forward.

The Knights recovered from that setback to build a 12-0 lead after nine minutes courtesy of converted tries by Ponga and Pearce in the space of two minutes.

Jinking to his left, Ponga stepped, stopped, propped off his left foot and darted over to score in the seventh minute, and Mason Lino converted for a 6-0 lead.

Pearce made a mid-field bust in the next set, dummied to Lachlan Fitzgibbon looming on his left, scooted away to score under the posts, and Lino added the extras for 12-0.

The Cowboys grafted their way back into the game midway through the half by forcing mistakes out of the Knights and earning repeat sets through some astute kicking by halfback Jake Clifford.

Ponga crosses for his second try

Newcastle had to defend multiple sets on their line but eventually cracked when Clifford pushed through attempted tackles by Lino and David Klemmer to score in the 28th minute. Jordan Kahu converted from close range to cut the deficit to 12-6.

Prop Jacob Saifiti looked to have extended Newcastle’s lead when he crashed over to score in the 34th minute but it was disallowed on review, because Barnett was ruled to have obstructed Cowboys forward Scott Bolton after playing the ball.

Ponga, Watson and Pearce combined on Newcastle’s left edge to create another chance in the 38th minute but the points went begging when Tautau Moga passed the ball over winger Hymel Hunt’s head and over the sideline.

Clifford breaks the line on the left

The Knights earned a reprieve when Cowboys centre Coen Hess knocked on from the subsequent scrum, giving Newcastle another shot from deep in North Queensland territory.

From that scrum, Pearce and Lino shifted the ball right and Ponga was too quick for Hess and the North Queensland left-edge defence to score in the corner.

Lino’s sideline conversion gave the Knights an 18-6 lead, which more accurately reflected their dominance for most of the first half.

Knights coach Nathan Brown made a late change to his side, moving Sione Mata’utia to right centre and Hymel Hunt to the left wing so he could use Kurt Mann off the bench in a utility role.

Mann replaced Watson in the 54th minute after Watson hobbled from the field and up the tunnel, telling Knights medical staff he heard a “pop” in his knee, but after an initial examination it was not considered serious and he could have returned if required.

The Cowboys had two chances to score early in the second half and mount a comeback but Michael Morgan’s grubber kick into the in-goal bounced away from Scott Drinkwater in the 42nd minute.

Winger Kyle Feldt only had to catch the ball from Tom Opacic’s stab kick 10 minutes later but could not handle it. It was that sort of afternoon for the Cowboys. 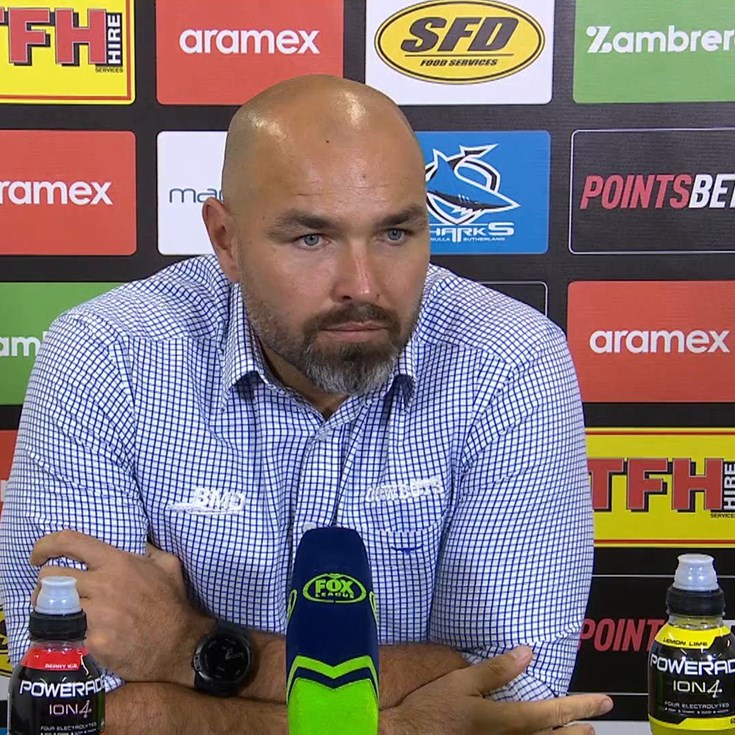 Leading the way for our young women