Gavin Cooper's 300th NRL game ended in style when Cowboys teammate Jake Clifford landed the field goal which set the stage for a 15-13 win over the Roosters in Gosford on Sunday.

After five missed chances at taking the one-pointer – three from the Roosters and two from Clifford himself – the No.7 piloted the ball between the posts in the 79th minute.

He then landed a penalty after the fulltime siren to supply the final scoreline.

Clifford, who was without his usual halves partner and team skipper Michael Morgan due to a concussion, steered his side around the field with aplomb.

Cooper led the teams out onto the field with his two children hand-in-hand. All but 76 of his 300 games have been with the Cowboys.

He's the 37th player to enter the elusive club but only the second Cowboy behind best mate Johnathan Thurston, who flew up from Melbourne - and Cam Smith's 400th celebrations - to be at the Cooper party.

Clifford nails the field goal for the upset win

NRL Head of Football Graham Annesley presented the game ball to the man from Murgon in central Queensland after the match.

The Roosters needed to win by five or more to grab back second place from the Rabbitohs on the NRL ladder. Despite now having lost five of their past seven games, they remain in the top-four.

For the men from the tropics, they grabbed their seventh win for the season and ended a three-match losing streak.

While the Roosters have kept plenty of teams scoreless at half-time this year, it has not happened to them in 2019 until the Cowboys did so on Sunday.

Clifford showed the ball to his backs in the 14th minute before doing it all himself.

The 6-0 lead was threatened a couple of times with Nat Butcher held up over the line, and a forward pass ruled from Latrell Mitchell to his winger Daniel Tupou, but that's the way it stayed at the break.

Jared Waerea-Hargreaves was having a day out. First, he pulled back Jason Taumalolo from the try-line in the eighth minute and then ran over the top of Josh McGuire in the 10th.

But two minutes later and another altercation with the Queensland forward led to Waerea-Hargreaves being placed on report for leading with his head.

Clifford became the second put on report, for tripping in the 37th minute.

The Roosters were looking to someone and in stepped returning co-captain Jake Friend.

Playing just his fourth game for 2019 after a torn biceps against the Dragons in round seven, Friend kicked a 40-20 in the 50th minute and scored in the 51st, stepping off his right foot from dummy-half to catch the defenders napping.

Scores were level at 6-6 and the Roosters were starting to look the goods.

A Luke Keary break down the left touchline and the ensuing kick in-field just evaded the fingers of Cooper Cronk in-goal.

Morris scores on the right as the Roosters take the lead

Then Waerea-Hargreaves' heavy tackle on Scott Drinkwater gave the Roosters possession 30 metres out from the Cowboys line.

Three plays later and Brett Morris was over in the right corner and the Roosters led 12-6.

But the Cowboys weren't done yet. A Clifford high ball was knocked-on by fullback Joseph Manu, and then the Cowboys got a repeat set off a John Asiata grubber. The Roosters goal-line defence finally cracked it was Asiata sneaking over with 11 minutes left. The scoreboard was again locked up.

Prior to Clifford's 78th-minute success with a field goal attempt, there had been the slew of misses. 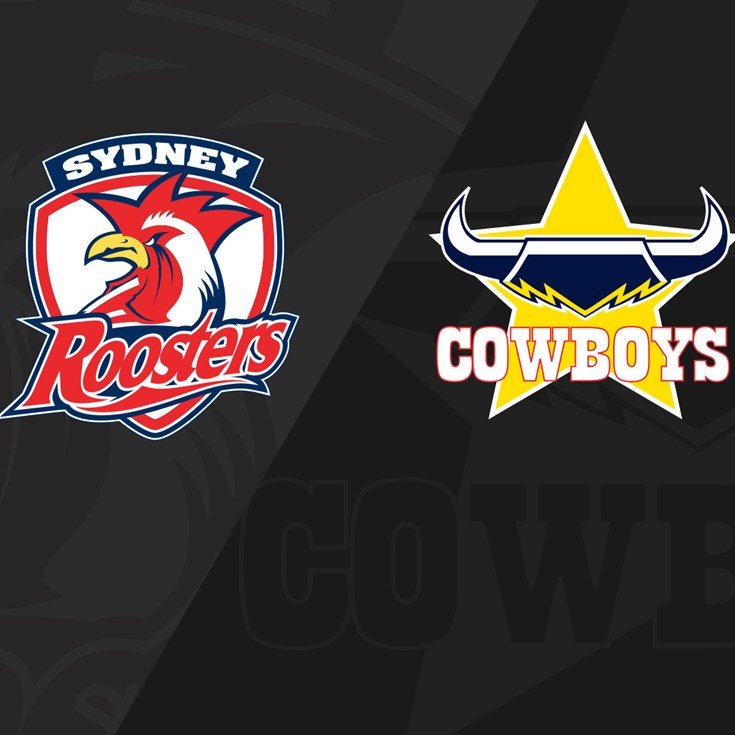 Green: He should take a lot of confidence out of today