The cupboard is a little bare when it comes to the Queensland backs so coach Kevin Walters will be hoping his top three picks don't have any injury worries between now and June 5.

The Billy Slater and Greg Inglis now retired, Darius Boyd retired from rep footy, Val Holmes trying to earn a start in the NFL and Nene Macdonald out injured, the Maroons are short on options in the outside backs.

With three certain starters and one very vexed spot in the Queensland three-quarter line, NRL.com Stats has crunched the numbers on the options Walters has available.

Oates is certain to retain his spot on the left wing. Knights flanker Edrick Lee has produced steady form and is a one-time Queensland 18th man and would probably come in if injury struck Oates. The Broncos star's attacking form has been good with a huge nine tries in as many games plus 42 busts and 167 metres per game, though his error count has been high.

Lee has produced some notable plays and is a big body, though his work under the high ball could use some improvement. He would also be a very outside chance of a right wing spot if Dane Gagai was used at centre.

The big conundrum for Walters and the Maroons hierarchy is what to do with Inglis's left centre spot. Darius Boyd could be an option if he were to come out of representative retirement and Cowboys halfback Michael Morgan played a match-winning hand at centre in the 2017 decider. Among specialists, the best option looks to be Newcastle's former Maroons under 20s centre Hymel Hunt.

Either of the right centre candidates, Will Chambers and Justin O'Neill, could switch to the other side if Walters decided to use both as a centre pairing. Chambers is a certainty to be in the side and there could be a temptation to keep him away from 2018 tormentor Latrell Mitchell while O'Neill, after the better part of two seasons playing a long way below his best and a stint in the Intrust Super Cup already this year, has struck form over the past few weeks.

Morgan will be in the 17 and played the last of his nine Origins at fullback. His best spot appears to be halfback, where he plays for his club and should play if Daly Cherry-Evans fails to overcome an ankle injury, while he could also reprise his super-rub bench role after playing seven of his nine Origins from the interchange given he covers plenty of positions.

The preferred scenario for Walters appears to be Cherry-Evans in the halves and Ben Hunt at hooker with a forward or utility to help at dummy-half allowing Morgan to play centre. If DCE is out the Maroons may have to punt on recalling O'Neill or blooding Hunt to partner Chambers.

Chambers will retain his right centre spot, unless he is injured or asked to play on the left. O'Neill played the last of his four Origins in game one of 2017 and would have to be an extremely long shot to add a fifth cap after his form over the past 18 to 24 months. He's probably more of a break-glass option and still at least one injury away from being under serious consideration but a recent uptick in form and the fact he has played before could count in his favour.

Fittler needs to see more from Cleary and Maloney

Crunching the stats of all four centre candidates, Morgan's numbers are heavily skewed towards creative play since he lines up in the halves while simultaneously denting his ball-running stats. O'Neill is perhaps a surprising leader in terms of running game with seven tries in six games, 124 metres per game and 20 busts.

Hunt has the best effective tackle rate and fewest errors but has hardly been dominant for Newcastle. Chambers has been good defensively and quiet in attack but as an incumbent with a good overall record in a problematic position he should have no trouble getting selected.

Barring injury, the only thing that could stop Dane Gagai being named on the right wing is if he is asked to play centre. He has earned a Queensland man-of-the-series award from the right wing and while his defence at centre would be problematic in Origin his powerful carries and slick finishing and work under the high ball mark Gagai as a top-tier representative winger. His stats this year are nothing to write home about but he's been forced to cover centre since round three in an injury-hit Souths backline.

Feldt has been thereabouts for a few years, generally with a few more errors in his game than you'd want for an Origin winger but the Cowboy is capable of producing stunning tries alongside a useful yardage game. He's had far too much competition for spots over the past two or three years and unfortunately this year with the competition thinner he missed the first eight weeks with a groin problem. He's not out of the running for a debut this year but even with a huge fortnight from now Feldt will be up against it forcing his way into game one. 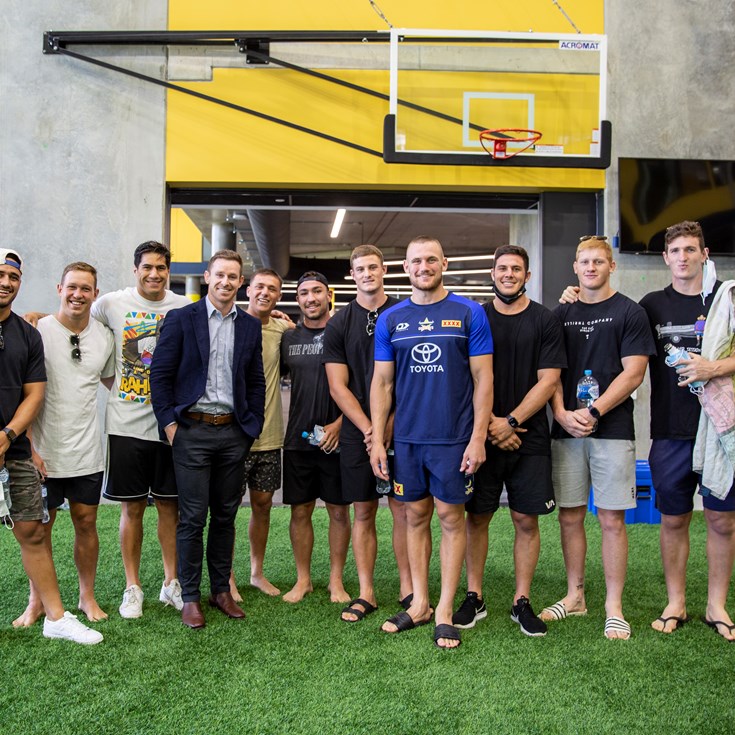 Walters: We have enough talent there to win the series