Matt Bowen shares how students in remote communities of Far North Queensland are encouraged to attend school through the Try for 5! program.

I recently got the chance to reward classes and students from Weipa and Mapoon who are performing well in the Try for 5! intra-school challenge.

When visiting schools, we engage with students in different ways to encourage them to try their best, which I'll share with you below.

Mapoon is a remote community in the Cape York Peninsula with a Western Cape College campus.

When we arrived we set up in the undercover play area for a range of games, from sharks & octopus (bull rush style), to scramble football and star wars (kicking and passing game).

Afterwards, we were joined by students for morning tea to catch up on how the term has been going.

I find that conversations like this with students gives me time to encourage them one-on-one, which is great!

After morning tea, everyone gathered for awards and presentations where I got to announce the winning class, Rindi, for getting the best attendance results for the term.

We also presented individual awards to a few students which is a great way to reward their efforts.

It was great to see students doing so well in Term 3!

I visited the Western Cape College campus in Weipa, which is a town on the Coast of the Cape York Peninsula.

We visited the Year 4 class first up as they were the winning class for the last fortnight. As a reward we went out to the oval and played a game of sharks and octopus, then a game of kickball.

Next up was the Year 2 class, who also had great attendance at school and had won the fortnight prior to Year 4.

They were able to go out and play the same games as the Year 4 class to celebrate their efforts!

Matt Bowen, Cowboys Community Engagement Officer
Matt engages with school communities across North Queensland in his role with the Cowboys, sharing messages as part of the Try for 5! school attendance program. The program motivates and rewards individual classes and schools for improving their attendance record. About: www.cowboysfoundation.org.au/programs/try-for-5/ 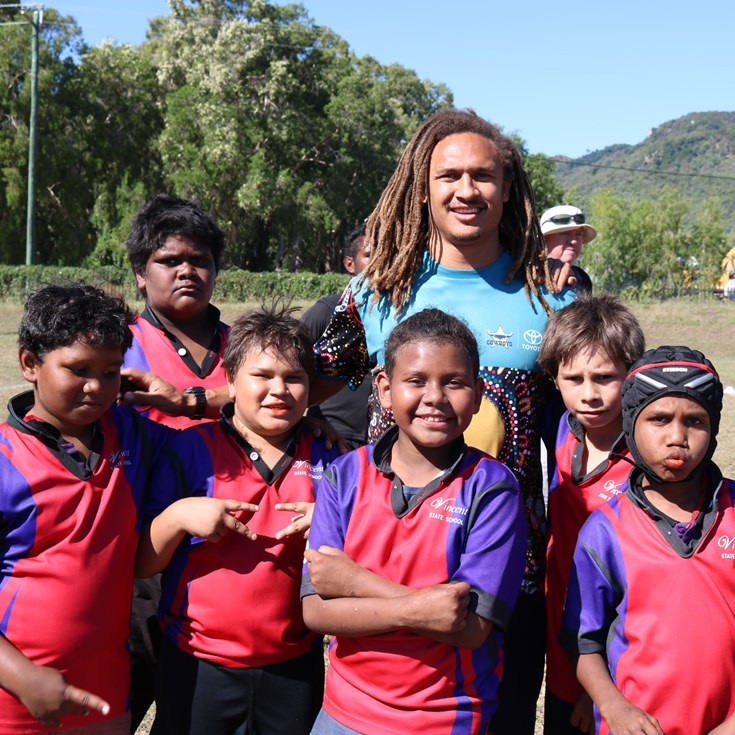 Fun, footy and friendship in paradise

Presented By Evolution Mining 15 hours ago
14

Presented By Evolution Mining 1 week ago