An emotion charged Andrew Fifita responded to a decision by Cronulla coach Shane Flanagan to bench him midway through the first half by returning to inspire his injury hit side to a 28-16 defeat of North Queensland at Southern Cross Group Stadium.

Fifita reacted angrily to his benching after conceding a penalty in the lead up to an 18th minute try by Cowboys forward Coen Hess and was animated on the sideline as he prepared to make his return in the 60th minute.

After charging his way over the tryline in the 69th minute to put Cronulla ahead 18-12, a fired up Fifita shouted and pointed as he looked towards the Sharks coaching box.

Regardless of how Fifita felt, the decision to keep him sitting on the sideline for 42 minutes could be viewed as a smart tactic, given the fact the Sharks scored three of their five tries in the final 11 minutes to wreck any thoughts of Johnathan Thurston celebrating a win in his farewell Sydney match.

However, it was also a brave call on Flanagan's behalf as the home side lost centres Jesse Ramien (ankle) and Ricky Luetele (knee) during the match and were struggling for cohesion at times.

The Sharks went into the match knowing a win by 30 points or more would catapult them into the top four after Penrith's loss to Newcastle and St George Illawarra's defeat of Wests Tigers in games played earlier in the day, while a loss could see them drop to seventh.

At fulltime, they had maintained their ladder position in sixth place but kept alive their hopes of a top four finish.

The motivation for the Cowboys was to climb two points ahead of Parramatta at the bottom of the Telstra Premiership ladder ahead of next weekend's clash with the Eels in Townsville – and to send Thurston out with a win in his last NRL appearance in Sydney.

The early signs were good for Cronulla, with five-eighth Matt Moylan stepping his way over the try line in just the seventh minute only for the Bunker to rule Sharks skipper Paul Gallen had obstructed John Asiata from attempting a tackle.

It was the beginning of what would become a night of missed opportunities for the Sharks, who had again looked set to score just four minutes later when Valentine Holmes accelerated out of dummy half and ran 60 metres but he lacked support and was rounded up by Kyle Feldt.

In between, rival backrowers Luke Lewis and Coen Hess traded tries, with Cronulla halfback Chad Townsend putting Lewis into a hole after Feldt was penalised for stripping the ball from Holmes after his 11th minute break, while Hess scored off a Thurston flick pass in the 18th minute.

The Cowboys try followed a penalty against Fifita near halfway for being too slow to get off the tackled player and he was replaced immediately after the re-start, along with centre Jesse Ramien, who injured his right ankle a few sets earlier.

Thurston missed the conversion but a 34th minute penalty goal enabled him to level the scores at 6-6 before the halftime break.

Moylan targeted North Queensland left winger Gideon Gela-Mosby and fullback Te Maire Martin under the high ball in the second half and the tactic led to a 49th minute try to Townsend, who stepped through the defence to score.

However, the Cowboys again drew level at 12-12 when prop Jordan McLean swivelled out of an attempted tackle by Joseph Paulo and Thurston added the extras.

Fifita's return to the fray in the 60th minute swung momentum Cronulla's way and he put his side back in front when he burst through the defence to score near the posts to give Townsend a simple conversion.

The Cowboys replied when second rower Gavin Cooper scored in the corner but Thurston missed the conversion from the sideline and the Sharks stormed home through tries to Josh Dugan and Jayson Bukuya.

News & Notes: Cronulla captain Paul Gallen became only the seventh player to play a premiership match after turning 37 years of age... Sharks centre Jesse Ramien suffered a right ankle injury in the 10th minute and came from the field in the 11th minute... Fellow centre Ricky Luetele was forced from the field in the 47th minute with a knee injury... Cowboys prop John Asiata was sin binned in the 75th minute for a professional foul. 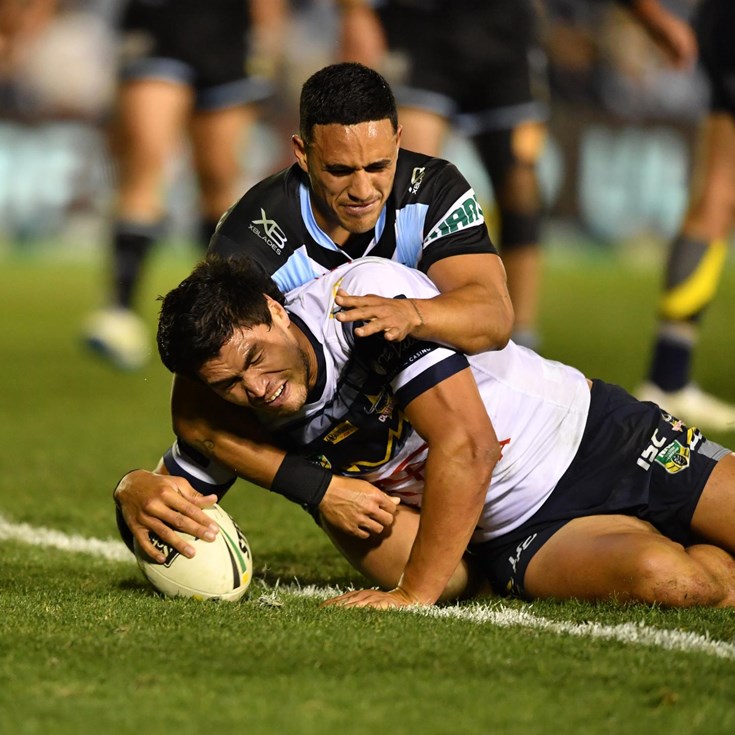