The North Queensland Toyota Cowboys travel to chilly Canberra to take on the Raiders in an exciting Round 18 match-up.

After being dominated by the Raiders in the first decade of the club's history, the Cowboys have returned the favour in recent seasons.

North Queensland won just four games against the Raiders in their first 12 seasons in the top grade, but since the start of the 2007 season, it's been the Cowboys who have held bragging rights in the head to head match up.

The Cowboys have won 14 of the last 20 meetings between the two sides including both fixtures last season.

Temperatures are expected to drop as low as -5 degrees on Saturday night, but surprisingly for a team from North Queensland, the Cowboys have thrived in chilly conditions over the past two seasons.

With temperatures below freezing at kick off in the corresponding fixture in Canberra last season, the Cowboys produced a brilliant performance to topple the Raiders 31-18.

The trend continued in 2018 when the club travelled to chilly Bathurst to take on the Panthers in Round 9.

Paul Green's men produced one of their best performances of the season to topple Penrith 26-20 at Carrington Park.

Cowboys fan favourite John Asiata returns this week after missing a large chunk of the season with a torn pec.

The skilful forward suffered the injury in Round 7 against the Titans, but a relentless attitude to his rehab has seen him return weeks ahead of schedule.

Asiata has been named to start in the front-row alongside Scott Bolton with co-captain Matt Scott still missing through a neck injury.

4. BACK TO WHERE IT BEGAN

Former Raiders cult hero Shaun Fensom will return to Canberra as a Cowboy for the second time on Saturday night.

Fensom made 139 appearances for the Green Machine between 2009 and 2016, but left the nation's capital early in the 2017 season to join the Cowboys.

Fensom will be hoping his second venture to Canberra as a Cowboy will be as fruitful as his first in Round 17 last season.

The Round 16 loss to the Rabbitohs means the Cowboys are still searching for club win number 250.

A victory over the Raiders on Saturday night would see North Queensland reach the mark. 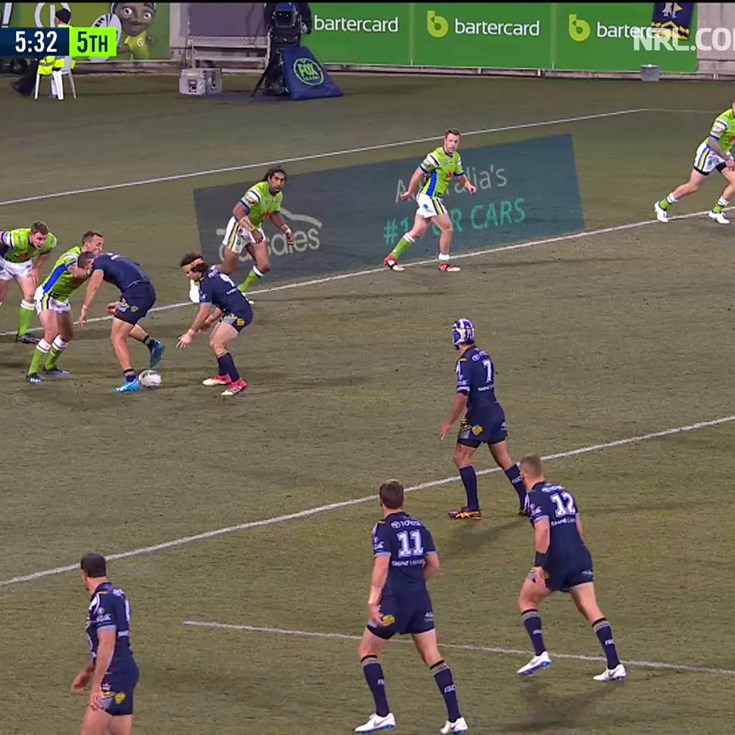 Cowboys stay in the fight but Raiders break away