South Sydney have held their nerve to break a 29-year record and stretch their winning streak to eight with a 21-20 victory over North Queensland at Barlow Park in Cairns on Sunday.

A try to Lachlan Coote with nine minutes remaining enabled the Cowboys to take a four-point lead late in the game after a see-sawing contest with both sides in control at various stages of the clash.

But the Rabbitohs held their nerve with an escort penalty against the Cowboys enabling Damien Cook to send Robert Jennings over in the corner to level the scores at 20-20.

Bunnies playmaker Adam Reynolds had the chance to give the home side a lead before full-time but his sideline conversion attempt hit the post.

Reynolds then faded a first attempt at field goal, before slotting the match-winner with a minute remaining.

Two tries to the Bunnies a minute before and after half-time had halted the Cowboys' momentum after Johnathan Thurston set up North Queensland's two opening tries and kicked three goals for a 14-6 lead moments before the break.

It proved a spirit-breaking period for the Cowboys with a Thurston error allowing the Rabbitohs field position to win the game.

Thurston then had a final shot at field goal after the siren in a frantic finish but the attempt was well wide.

The result for the Cowboys capped another heart-breaking finish in Thurston's swansong season.

The cloudy weather in Cairns looked threatening all day and welcomed the players with rain as soon as they took the field at Barlow Park in otherwise humid conditions.

A run-around play with Gavin Cooper allowed Thurston to place a deft kick into the hands of Antonio Winterstein for the Cowboys' opening try.

But the Rabbitohs responded shortly after when Scott Bolton played the ball sideways in a horrible attempt in returning from the restart.

After a couple of earlier kicks in good territory had come to no avail, Reynolds opted to put in a grubber for himself and regathered to score under the posts – the Bunker ruling Jake Granville was not impeded in the lead-up to the try.

North Queensland dusted off the decision to go over three minutes later with Thurston having the ball on a string again to send Cooper in for North Queensland's second.

Rabbitohs back-rower Cam Murray was ruled inside the 10 metres to enable the Cowboys to take a penalty goal and an eight-point lead.

The Bunnies had the final say late in the first half with Sam Burgess offloading to Cody Walker on the halftime siren.

An error at the play-the-ball from Ben Hampton immediately after the break allowed Souths to send Campbell Graham over in the corner from a swift Dane Gagai pass.

Not even a Thurston effort to intercept a Rabbitohs backline movement from a scrum could spark a Cowboys comeback.

News and notes: The Rabbitohs won their eighth game in a row for the first time since 1989 … Jason Clark was placed on report for a cannonball tackle on Jason Taumalolo in the 66th minute … Adam Reynolds kicked his 510th goal for the Rabbitohs to move second on the all-time list at the club… Crowd: 7195. 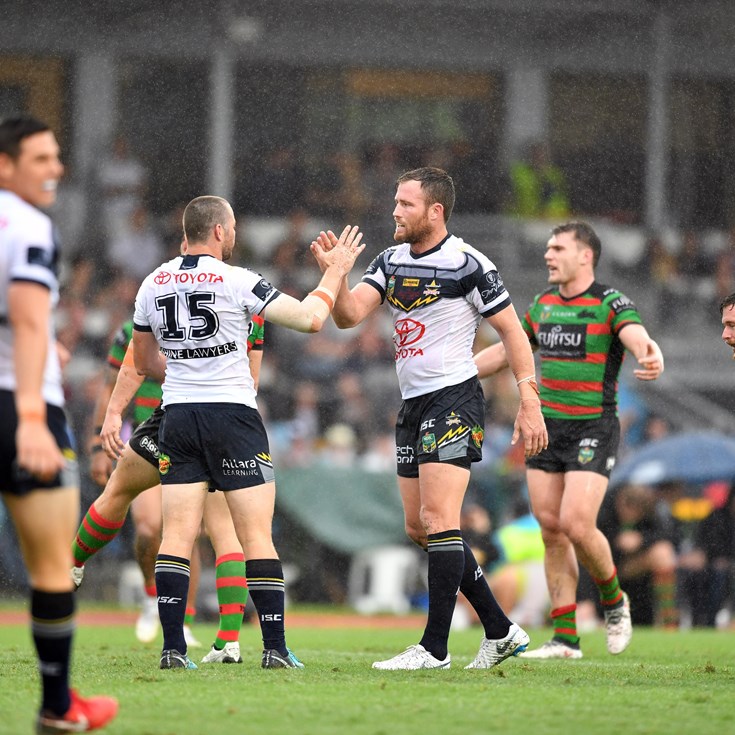