Johnathan Thurston and Jason Taumalolo have used the perfect combination of poise and power to lift North Queensland to a 26-12 win over the Manly Sea Eagles at Lottoland.

Thurston took the spoils in his head to head battle with Daly Cherry-Evans while Taumalolo made 234 metres from 25 runs as he gave the Manly defenders nightmares. Taumalolo's massive night also included 11 tackle breaks and a mighty 103 post-contact metres.

Thurston was floored by a late shoulder charge by Jack Gosiewski in the 16th minute but bounced to his feet to land the penalty goal and followed that up with a grubber for Taumalolo's try in the 29th minute.

Kicking with the aid of a strong wind in the first half, Thurston pinned Manly at their own end and the Cowboys capitalised on the weight of possession with a well worked try to Antonio Winterstein six minutes before the break.

The Sea Eagles were almost out on their feet by the time Winterstein made it a double in the 63rd minute. And five minutes later centre Enari Tuala scored his first NRL try courtesy of a beautiful catch and pass from his winger Kyle Feldt off a Thurston kick.

The win was the Cowboys' first at Lottoland for seven years and just their fourth victory of 2018.

Manly were reduced to 16 for the second half when winger Jorge Taufua failed to return from a concussion test at halftime.

Play was held up for a few minutes in the latter stages, when lock Shaun Lane's head hit the ground hard and he started convulsing. A stretcher was brought out but he managed to walk from the field in the 75th minute.

The Cowboys were itching to grab some competition points after losing last two games at home to South Sydney and the Storm by one point. Manly could empathise after they also lost by a field goal to Canberra last weekend.

It was the Cowboys looking like winners early enjoying 56 per cent of possession in the first half. By rights should have scored more than the two tries to Taumalolo (29th) and Winterstein (33rd) since they were camped in the Sea Eagles 30-metre zone for so long.

Manly didn't reach the Cowboys' 20-metre line until the 24th minute. The very next play and Shaun Lane, filling in for Jake Trbojevic, took on three defenders, spun around, then used his long arm to reach over the line beside the goal posts.

News & Notes: Forward Mitchell Dunn became Cowboy No.273 in making his NRL debut. He was captain of Cowboys' Under-20s last year... Jack Gosiewski suffered a suspected broken arm late in the game and also went on report for his late hit on Thurston in the first half... Kane Linnett played his first game since tearing his pectoral muscle in the February trial against the Storm....Crowd: 6772. 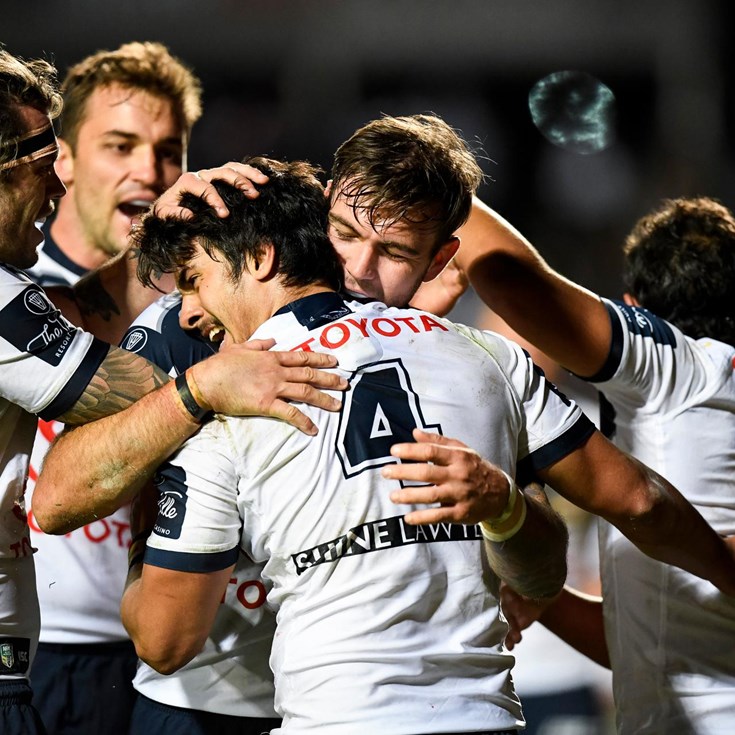 Thurston speaks out after another late hit