The South Sydney Rabbitohs have produced the great escape to break the Cowboys' hearts in a dramatic 20-19 victory at 1300Smiles Stadium on Saturday night.

A field goal by Michael Morgan looked to have sealed a one-point for the home side but the Rabbitohs got the ball back from a short dropout inside the last minute and stormed down field to set Adam Reynolds up for a shot at field goal.

The Rabbitohs No.7 sprayed the ball wide but Cowboys hooker Jake Granville was ruled to have been offside and Reynolds was presented with a penalty shot from in front to hand Souths a third win on the trot.

Rabbitohs hooker Damien Cook has all but stamped his name on the NSW No.9 jersey, setting up his side's first try and scoring the second with electric running from dummy half.

South Sydney battled their own injury problems, losing fullback Alex Johnston and lock Sam Burgess to injuries in the first half.

The Rabbitohs wasted no time opening their account when Johnathan Thurston gave away a penalty in the ruck after the visitors broke the line early. George Burgess then opened his tryscoring account for 2018 with a trademark charge in just the third minute.

But Souths knocked on from the restart, gifting the Cowboys a perfect opportunity when Cody Walker was sent to the sin bin for denying a tryscoring opportunity, but a Coen Hess offload found the ground and the Souths came up with the ball.

The Cowboys looked like they lacked patience when Thurston's cross-field kick was fielded in-goal, but the halfback made a one-on-rake to take the ball back. A few tackles later a left side raid found Michael Morgan who sent the ball on to Antonio Winterstein for the Cowboys' first points of the night.

The home side had an injection of energy before halftime with Francis Molo, Enari Tuala and Corey Jensen all coming on. Their increased pace earned them an offside penalty, and Thurston took the two points to make it 12-8 in favour of the visitors at the break.

Another penalty to Thurston pulled the Cowboys back within two but when Cook exploded in the 51st minute the Rabbitohs had breathing space at 18-10.

Thurston took two more points to make it 18-12 before a second try to Winterstein and a classic sideline conversion by the skipper levelled the scores.

Morgan gave the home side the lead in the 74th minute and the Cowboys faithful were daring to dream but it turned to a nightmare when the offside penalty against Granville in the dying seconds gave Reynolds the chance to steal the win.

News & Notes: Francis Molo played his first NRL game since round 11 of 2014... Jason Taumalolo played his 150th NRL game and was inspirational for the Cowboys... The Rabbitohs are on the road again next weekend when they travel to New Zealand to play the Warriors... This was the Rabbitohs' first win over the Cowboys since 2015. 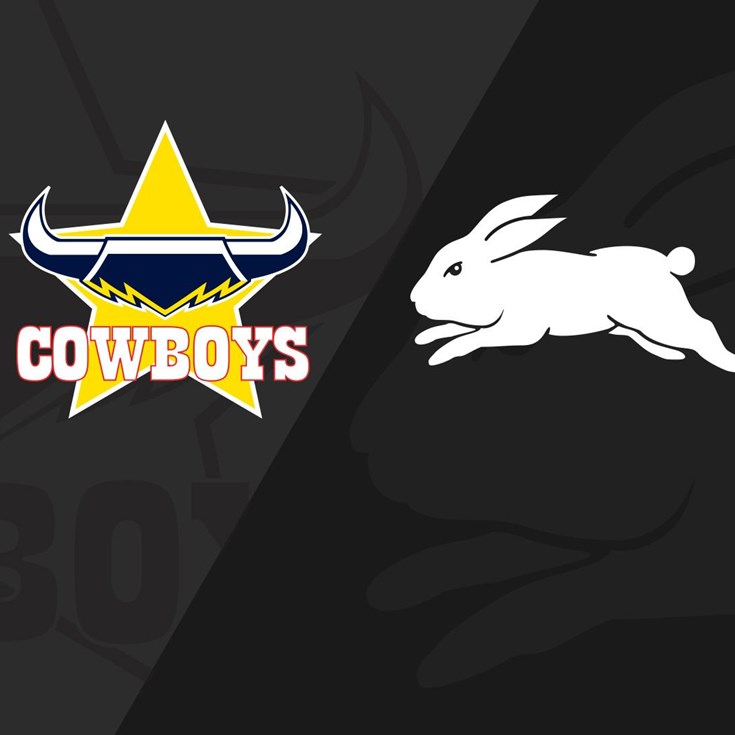