Jason Taumalolo has revealed how he's thrown off the shackles and cleared his mind after bottling up frustration that was building after five straight losses for the Cowboys.

The North Queensland lock went on one of his trademark rampages to score in last week's drought-breaking 26-14 win over the Gold Coast, scoring his first try of the year in what was a powerful all-round game by the Tongan international.

The 24-year-old powerhouse keeps his feelings to himself. After the 2015 grand final he revealed how he'd been lying awake at night earlier that year weighing up whether to re-sign with the Cowboys or to join the Warriors.

This year, he admits he had been over-thinking his football as the frustration built.

"I bottled it all up," Taumalolo told NRL.com.

"After five losses you start to wonder what you are doing wrong. You start to question whether you are playing good enough footy to be at the top grade level.

"The more I thought about it, the more it played on my head. So I just relaxed and re-evaluated a few things about myself.

"I just tried to relax. I'd been playing up-tight. I just wanted to go out and have fun and get back to enjoying playing footy again, and that's what I did."

Taumalolo said the win over the Titans was "a huge relief".

"A lot of pressure was upon us," he said.

"The win was crucial, a confidence booster for everyone and hopefully we can carry that on against Canberra."

Taumalolo also explained how calls and texts from thousands of kilometres away had lifted his spirits.

During the World Cup he was feted like a national hero but that adulation has not subsided even while wearing Cowboys colours.

"I am still getting messages from people in Tonga saying they how proud they are of me," he said.

"They were disappointed that we had those losses but they are still throwing their support behind us. You think it is all done after the World Cup, but it is inspirational that support is still there."

Taumalolo has been averaging 152 metres through seven Telstra Premiership games this season, compared to 205 last year.

He is also averaging five fewer minutes on the park in 2018, largely due to the fact that he stepped up in Matt Scott's absence last season.

"I don't look at stats and numbers," Taumalolo said.

"I think that is the coaching department's job. My job is to go out there and do what I do, and play footy.

"There's a lot to worry about in footy without worrying about what everybody else is saying."

Taumalolo has his coach in his corner when it comes to the numbers game.

"I look at the numbers, but if Jase hasn't run for 180 metres or 200 metres I don't say 'you've played poorly'. I look at the little parts he plays in the team and make sure he does that.

"Jase has been good attitude-wise. He's needed to be better in a few little areas and he's got himself right and ready to play."

Five-eighth Michael Morgan said Taumalolo had been a victim of his own outstanding 2017 and was still leading the side in the areas that counted.

"I just think he's set a high standard for himself off the back of previous seasons and everybody's expectations of him are higher as well.

"The more he winds up and just carries the footy the better he goes for us. He has become a real leader and I know he has high standards that he sets. The more he feels like that the better for us." 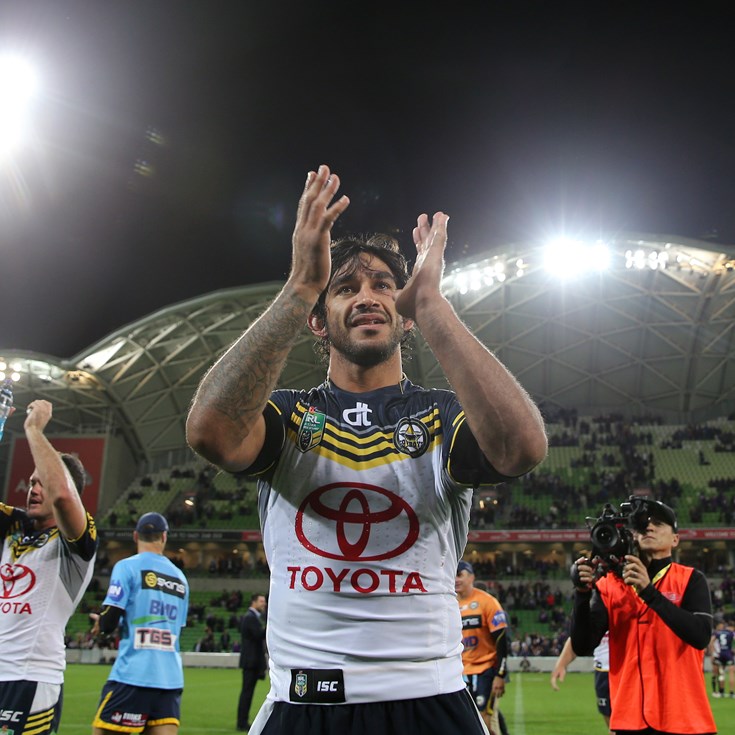