The Canterbury-Bankstown Bulldogs have produced their best performance of 2018 to stun the North Queensland Cowboys 27-10 at 1300 Smiles Stadium.

Both sides were desperate for a win and it was the visitors who got the jump early with two penalty goals to Moses Mbye and a try to winger Marcelo Montoya courtesy of slick hands from Will Hopoate after a kick had ricocheted off Johnathan Thurston's head back into Bulldogs hands.

Lachlan Coote had an unhappy return to the NRL, knocking on in an aerial contest early in the game as the Bulldogs set up camp in Cowboys territory and dominated possession.

The Bulldogs followed their try up with a right-side raid, and when the Cowboys couldn't get back onside to defend, the subsequent penalty goal to Mbye made it 12-0 after 22 minutes.

Coote eventually shook out the cobwebs with a perfect catch of a bomb, but despite three consecutive penalties carrying the Cowboys down to the Bulldogs' end and keeping them there, the home side couldn't capitalise.

When the Cowboys eventually got some field position the Bulldogs conceded a string of penalties inside their own 20 and Asipeli Fine was sent to the sin bin. But the home side couldn't take advantage of the extra man, with Jason Taumalolo's dive at the line ending with the ball slipping from his grasp..

The Bulldogs were happy to do it with 12 men and they stretched their lead to 18-0 after Raymond Faitala-Mariner scored from a superb Greg Eastwood short ball. A Kieran Foran field goal seconds before the siren made it 19-0 at the break.

The Cowboys looked like they'd turned their attack around in their first set in the second stanza but the Bulldogs kept scrambling and refused to buckle.

Consecutive line breaks from Taumalolo and Matt Scott should have led to more points but Gavin Cooper summed up the Cowboys' night when he bobbled the pass just short of the line.

The form of star playmakers Thurston and Michael Morgan remains a concern for the Cowboys, who host the Gold Coast Titans next Saturday night in a must-win clash.

Thurston tried his guts out all night as he always does but things simply aren't clicking for him, while Morgan's last-tackle options let him down.

For the Bulldogs, the form of the Morris twins, Aaron Woods and Faitala-Mariner will have them full of confidence for a round seven showdown with the Roosters. 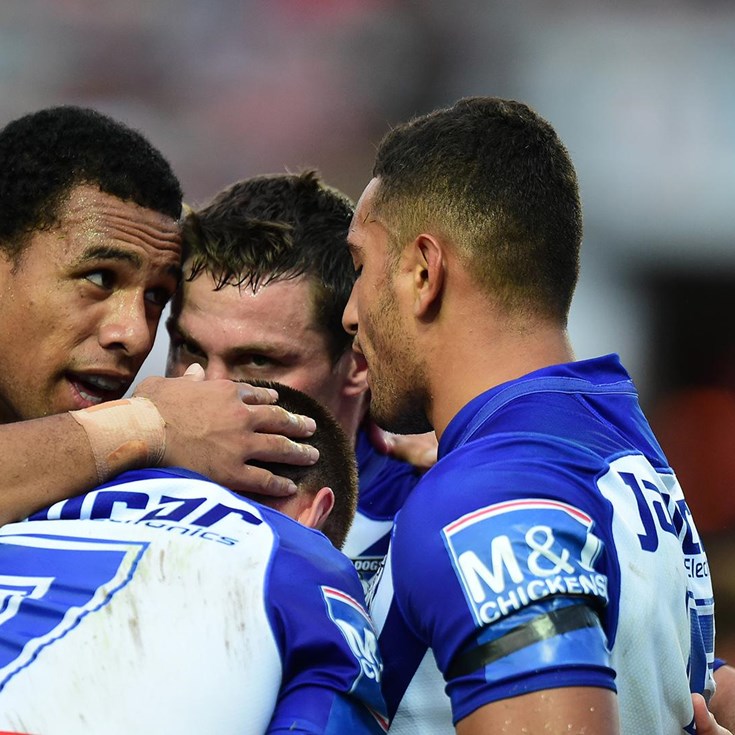 Feldt opens the scoring for the Cowboys