Australian, Queensland and NRL legends Johnathan Thurston and Cameron Smith will be recognised for their incredible contribution to rugby league in a special testimonial match to be played ahead of the 2018 season.

Thurston's Cowboys will take on Smith’s Storm at their spiritual Queensland home, Suncorp Stadium, on Friday 23 February, in the pre-season lead-up to Thurston’s final year in the NRL.

The game, which organisers are calling ‘A Night with Cam and JT’, will support event charity partners the Cowboys Community Foundation (supporting NRL Cowboys House), Ovarian Cancer Australia and the Prostate Cancer Foundation.

The match, which will be broadcast exclusively on Fox League, will also be the first time the teams will face each other since the 2017 NRL Grand Final, won 34-6 by the Storm over a Cowboys side playing its second Grand Final in three years after losing co-captain Thurston to a season-ending shoulder injury in Origin II.

Individually, the players' achievements already have them certain to be future Immortals of the game; collectively, their resume reads as: 657 club games, 59 Origins, 89 Tests, 10 All-Star appearances, 6 Dally M Medals, 5 Wally Lewis Medals, four NRL Grand Final wins and 2 World Cups – records that are likely never to be matched by a Queensland hooker and five-eighth in the same generation. 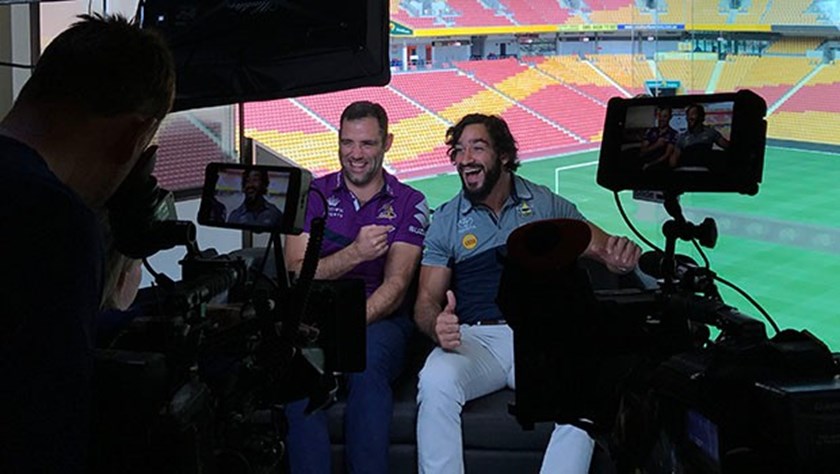 Both players’ dedication to rugby league is matched only by their dedication to giving back to the community, with both thrilled to be able to support these deserving charities with a portion of ticket sales being donated to all three charities.

Thurston has selected the Cowboys Community Foundation supporting NRL Cowboys House, and is excited to be able to support a charity he feels strongly about and is closely involved with.

“NRL Cowboys House provides housing and access to education for young Indigenous boys from remote North Queensland communities, who otherwise may not have had the opportunity to complete a secondary education," Thurston said.

"In less than one school year, I’ve personally witnessed significant transformation in our House brothers and know that providing a caring and culturally responsible environment focused on education is closing the gap for our boys, their families and their communities.

"I'm thrilled that this testimonial match gives me the opportunity to further support this generation-changing initiative from the Cowboys Community Foundation.”

Smith, who has selected two charities, Ovarian Cancer Australia and Prostate Cancer Foundation of Australia, said he was delighted that the match has given him the opportunity to support two charities he is passionate about.

“I have been an Ovarian Cancer Australia ambassador (OCA) for several years through the Storm’s link with the organisation and its founder Nicole Livingstone. The organisation works tirelessly to educate women and support those affected by it," Smith said.

“I have also decided to support Prostate Cancer Foundation of Australia. A member of my family has been affected by the disease and men’s health is not something that is often spoken about, so if I can create some awareness not only around prostate cancer but men’s health in general then that’s something I’d like to achieve as part of this testimonial match.”

Smith and Thurston will be celebrating a combined 32 years of professional rugby league in 2018 and having played together as both teammates and fierce opponents for more than two decades, it's fitting that they can celebrate their careers together in the city that started it all for them both – Brisbane.

Queensland Premier Annastacia Palaszczuk is equally as thrilled to have the game played in Brisbane, at the stadium where both players have made such incredible achievements throughout their career.

"Cameron and Johnathan are outstanding ambassadors for their club, their state, their country and the game of rugby league. They are also selfless contributors off the field," the Premier said.

The match will provide fans with an opportunity to pay tribute to the living legends for their contributions to rugby league, but will also be a chance for both players to thank the fans who have supported them throughout their careers, ahead of what is set to be a memorable season for both men.

The event will include game-day entertainment and fan activations involving Smith and Thurston with exciting announcements around these components to come.

Presented by
5 hours ago

Cotter sets career-high in win over the Bulldogs