A new footy season starts on Sunday for the North Queensland Toyota Cowboys when they take on the Cronulla Sharks in National Rugby League elimination final action at Allianz Stadium.

Played 43; Cowboys 16; Sharks 27. The Cowboys have a terrible record at Allianz, with just six wins from 23 starts and are sitting on a seven-game losing run at the venue. Five of those seven have come in finals football. They are also on a four-game losing run against the Sharks. 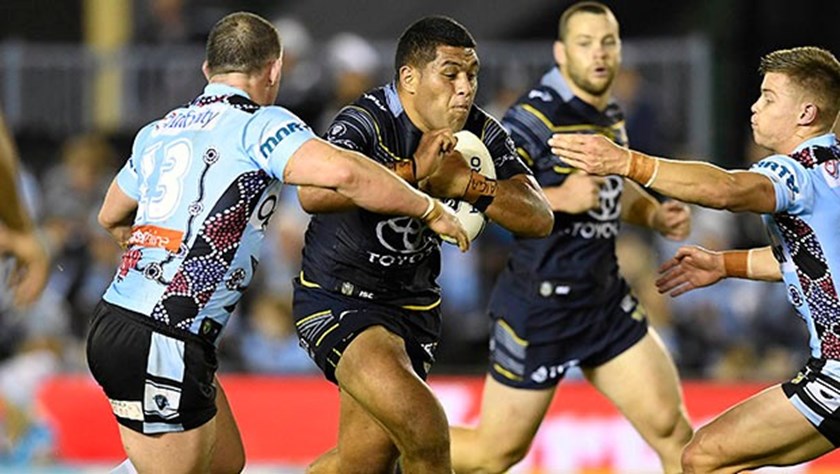 It’s dangerous to look at finals run-in form based solely on wins and losses.

By that measure, the Cowboys are in poor form, dropping five of their final regular season matches, their only win coming in Round 25 against a Wests Tigers team that barely avoided the wooden spoon.

But a closer look at the losses reveals that they were all to 2017 eventual finalists and three of them were to the top three teams.

Apart from a 26-8 loss to the Storm – where the Melburnians scored three late tries – none of the defeats was by more than 10 points.

So in terms of playing consistent, high-level footy against tough teams heading into the finals, the Cowboys are very well prepared.

The Sharks finished the regular season in fifth spot but would have been eyeing a top four finish in the year they defended their premiership.

The hosts won three of their last six matches, the victories coming against the Cowboys, Warriors and Knights.

Heavy losses to the Raiders and Broncos, plus a narrow one against the Roosters, presents patchy form leading into the finals, while they were hardly convincing against wooden-spooners Newcastle last-start with a tough eight-point victory. North Queensland’s injury woes are well documented – the calibre of players lost, the volume of injuries, the frequency – but Sunday will mark the first time this season that head coach Paul Green has been able to field the same team for three weeks straight.

Morgan will again benefit from another game alongside new-ish halves partner Te Maire Martin, while in the engine room Jason Taumalolo, John Asiata and Shaun Fensom will look to add punch through the middle.

Off the bench, versatile and dangerous utility Ben Hampton is primed for something special after nice performances in the past fortnight, while young tyros Corey Jensen and Coen Hess must give no quarter when called upon.

The Sharks have no such injuries woes, with Tony Williams their only high-profile omission.

For the hosts, the team’s attack orbits almost exclusively around in-form and dangerous five-eighth James Maloney.

This bloke is a top-shelf talent and can play-make and game-manage with the best of them.

Contain and limit him, and you’re a long way there.

The Sharks also have strike in the forwards with Andrew Fifita, Wade Graham and Luke Lewis all attacking threats. By any objective measure, to witness the Jason Taumalolo versus Paul Gallen battle is to witness the two best locks in the game doing what they do best … batter opposition defenders through the middle and carry their teams forward, one painstaking post-contact metre at a time.

All year Taumalolo and Gallen have led the competition in running metres and although in age terms they’re 11 years apart, in the number games, there’s not a lot separating them.

Against the Knights last start, Gallen ran for an improbable 303m, the contribution the final regular-season addition to a tally which stands at 4387m from 413 hit-ups across 24 games.

His young opponent on Sunday leads all comers in this stat with 2269 run metres from 365 charges – that’s a bruising, buffeting run likely to result in a sore everything for would-be tacklers … a sobering thought indeed.

Gallen has made 160 more tackles (760 to 600) than Taumalolo, and has played two more games, but both men routinely average over 60 minutes of game time each week.

Oh, and they’ve both scored three tries this season too.

Whichever of these NRL powerhouses can help their pack gain ascendancy through penetrative runs, quick play-the-ball and desire will go a long way to determining the outcome of this one.

Play-wise, these two are chalk and cheese, hence the intrigue.

Townsville product Holmes is a ball-runner first and can attack from all parts of the field.

Coote is a playmaker, an extra halves option for head coach Paul Green and one of the best organisational and defensive fullbacks in the game.

While Holmes will get the attention, look for Coote – who has been battling a niggling ankle injury – to step up when required. The recent head-to-head history between the sides has produced some gripping, close contests as well as some blowouts.

It’d be a brave punter to tip against the former scenario on Sunday.