Townsville schools have triumphed in an entertaining afternoon of age-group rugby league as 1300SMILES Stadium played host to the finals of the Aaron Payne Cup and Under-15 Cowboys Challenge.

Run and supported by the North Queensland Toyota Cowboys, the two finals were the culmination of round robin competitions in both divisions, run over the past few months.

Leading 12-0 a quarter of the way through the game, Iggy Park looked comfortable before conceding two late second-half tries, with TCC’s second a classy effort through the backline right on the half-time siren.

But a powerful run and try by Ignatius Park centre Ty Everett in the second half proved the telling as the host city school led 18-10 but with plenty of time on the clock.

Cathedral would hit straight back as classy halfback Ben Farr scythed over to cut the margin to four points, 18-14.

But the killer blow came nine minutes from full time as Iggy Park’s No.7 Adam Cook showed some class of his own to score under the posts, the halfback converting his own try to bring the lead back out to more than a converted try.

Hooker Joey Jensen then put the game beyond doubt with a soft try from dummy-half, as Cook’s steady boot – he kicked five from five – ensured Iggy Park got maximum return on their efforts.

Ignatius Park’s triumph has earned them a favourable seeding heading into the wider section of the state-wide GIO Cup schools competition. 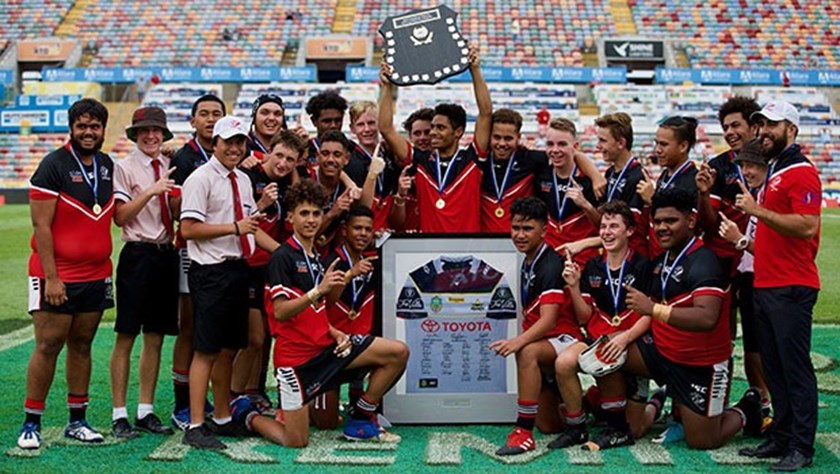 Earlier, Kirwan State High proved too strong for Mackay’s Mercy College with a 20-4 win in the Cowboys Challenge final.

Scores were locked at 4-all at the break, but a three-try tear in the second half proved telling as the Bears notched an emphatic victory.