Barlow Park has once again proved a happy hunting ground for the North Queensland Toyota Cowboys after they proved too hot to handle for the South Sydney Rabbitohs in ideal conditions in Cairns today.

After the ‘visiting’ Cowboys conceded the first try to ‘home’ team Souths, it was all the blue-and-grey as a 16-6 half-time lead was built upon for a 23-10 final scoreline.

But the win could come at a cost, with injuries again hurting the Cowboys as winger Antonio Winterstein did not return for the second half with a lower leg injury.

Also, halfback Michael Morgan knocked his shoulder but played on, prop Scott Bolton was treated once he came off the field after a marathon opening stint and John Asiata had continuing leg issues; all players but Winterstein continued on playing.

The injury fallout will be assessed in the coming days, but on the field it was all Cowboys as they treated the 11,000-strong crowd to a dazzling afternoon of top-shelf rugby league. An early Souths try to dangerous fullback Cody Walker on the back of a Cowboys error was to be the only first-half joy for Souths, who gave away a mammoth six penalties in the period to cruel any chance of gaining momentum.

The Cowboys immediately answered Walker’s try with rampaging lock Jason Taumalolo storming over in the 17th minute after the Cowboys forced a Souths error on the restart.

Further tries to winger Kyle Feldt – his eighth in eight games – and Coen Hess gave the Cowboys a handy 16-6 cushion going into the main break. 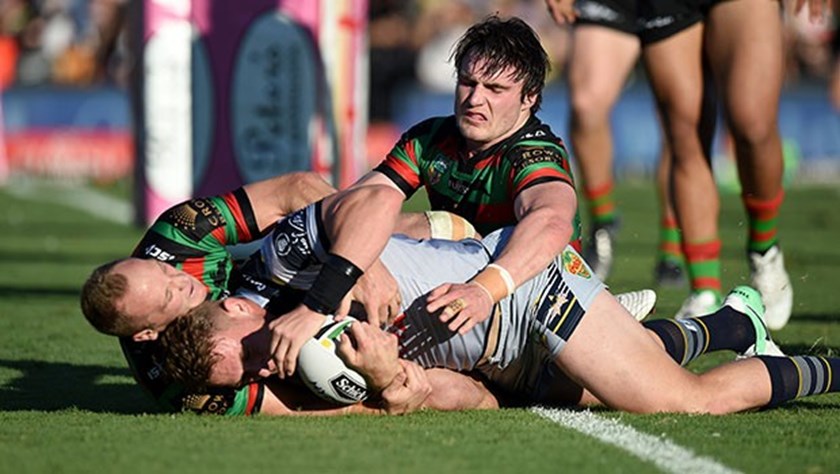 With Winterstein's injury, coach Paul Green was forced into a positional reshuffle in the second half as Kane Linnett pushed on to the wing and skipper Gavin Cooper moved to the centres.

It seemed to have little impact initially as classy hooker Jake Granville darted over from dummy-half in the 45th minute to extend the lead to 22-6.

However, that was it for Cowboys tries as the game deteriorated as a spectacle.

Souths winger Braidon Burns scored late for the Bunnies and a Lachlan Coote field goal pushed the margin out to 17 points.

The win moves the Cowboys to 11 victories for the season, the team moving to 26 competition points but staying at sixth place on the ladder, the team’s next assignment a Saturday night home game against the Warriors.