Some Kyle Feldt magic and a super-cool Ethan Lowe combined to ice a thrilling North Queensland Toyota Cowboys win over the Penrith Panthers in brilliant afternoon conditions in Townsville.

The 14-12 win wasn’t decided until the final seconds of the match as the Cowboys held on grimly, nursing a two-point lead for one full set.

Seconds earlier, Lowe slotted the go-ahead conversion after Feldt defied gravity to latch on to a Michael Morgan kick to tie the match up at 12-all.

Earlier, the Panthers looked likely winners after halfback Nathan Cleary put his side ahead with a quarter of an hour remaining.

But enjoying a glut of possession and showing true patience, the Cowboys held their nerve, with a huge effort from the core forwards not going unnoticed.

Playing the first game of the year knowing for sure that talismanic team leader Johnathan Thurston won’t be with them on the field again in 2017, the Cowboys – led by ironman Gavin Cooper – looked tentative and skittish during the first half.

Strong carries by all forwards and wingers Kyle Feldt and Antonio Winterstein ensured the team always got down the Panthers’ end, but a lack of clear decision-making and polish saw raids come unstuck time and again, and a lot of ball was shovelled out the back as the hosts scrambled.

Aside from execution issues, the Cowboys had their interchange rotation thrown out of kilter when Jake Granville and then John Asiata both spent time getting treatment in the sheds.

Earlier, Asiata came close to claiming his first ever NRL try in 64 games when he pounced on a loose ball, replays showing an NQ knock-on in the lead-up.

With not much going their way in attack, the Cowboys needed to be stout in defence, which they were for the most part.

Panthers back-rower Corey Harawira-Naera scored the only try of the half when he strolled into a yawning gap in the ninth minute. CREDIT WHERE IT’S DUE

The Penrith Panthers were rock solid in defence on their goalline, especially in the 15 minutes of the second half.

The Cowboys trainers continued to work double-time after the break as Shaun Fensom required treatment earlier in the period, the rugged forward returning to the rotation after 10 minutes.

Finally, the Cowboys cracked the Panthers with the unlikeliest of try scorers in the 57th minute.

Scheming all afternoon, five-eighth Michael Morgan got neat ball away close to the line to interchange forward Corey Jensen.

Playing in just his fifth NRL game, Jensen showed strength to burrow over, faintly touching the ball on the line after the final decision was sent upstairs. 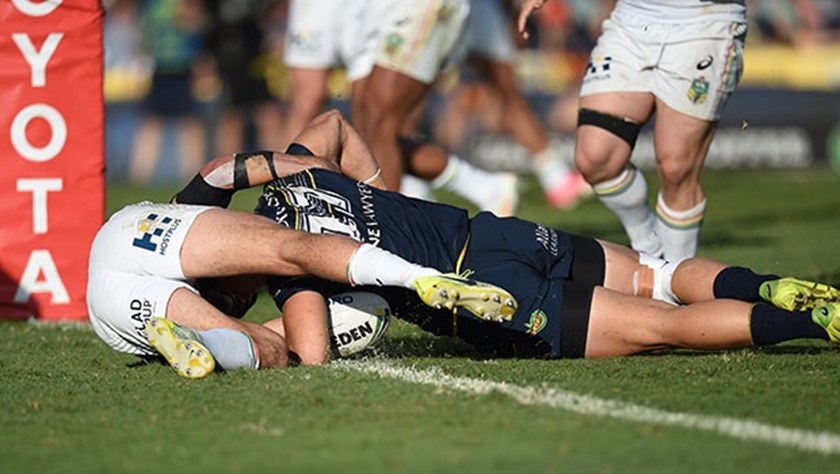 And while the Cowboys edged ahead 8-6 in the 62nd minute, there was no stopping livewire Panthers halfback Cleary who scythed over 13 minutes from time for the go-ahead try and subsequent conversion.

The Cowboys now turn their attention to a tough road trip to the nation’s capital where they’ll face the Canberra Raiders. 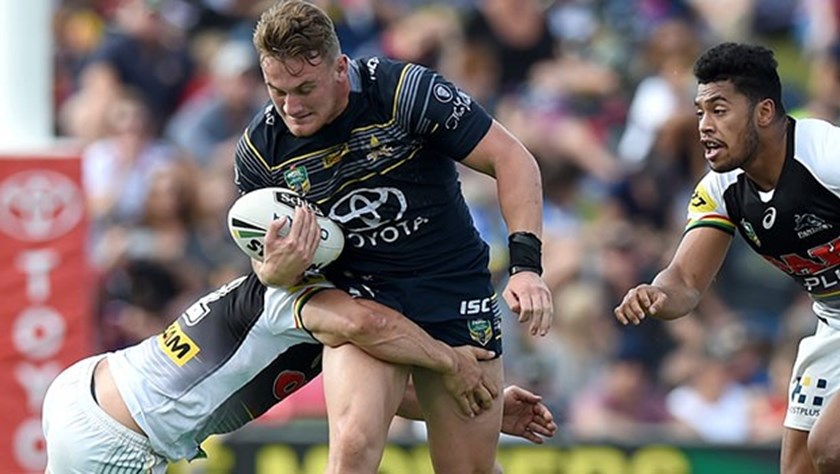