Like most teams faced with the challenge that is overcoming the sustained success of the Melbourne Storm, the North Queensland Toyota Cowboys are behind the eight-ball.

Of the 33 matches played between the teams, the Storm hold an overwhelming 23-10 record and defeated the Cowboys in all three meetings last year, albeit by a combined margin of just 15 points.

But the Cowboys have had notable recent successes against the perennial National Rugby League heavyweights.

It was a breathtaking 18-17 comeback win over the Storm in Round 4, 2015 in Townsville that provided the platform for the Cowboys’ stunning run to a maiden NRL premiership.

Having lost their first three games of the season, the Cowboys had their backs against the wall before talismanic co-captain Johnathan Thurston orchestrated a dramatic win that included two field goals, to snatch victory from the jaws of defeat.

There was also that emphatic 32-12 win over the Storm on their home ground which catapulted the Cowboys into the decider against the Broncos.

Last season, the Storm were clinical in all three victories over the North Queensland team: a one-point win in Brisbane as part of a Round 10 Suncorp Stadium double-header; a 16-8 triumph in Round 21 in Townsville and a 16-10 win in week one of the 2016 finals series.

Expect another titanic arm wrestle in the Melbourne twilight this Saturday. 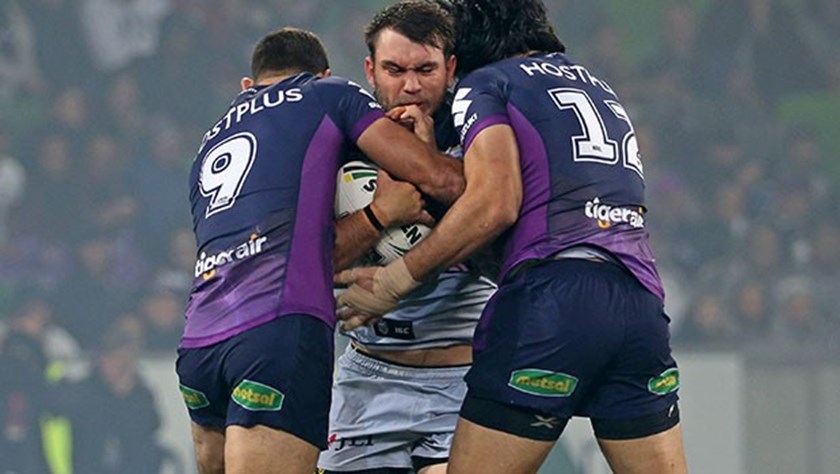 While the Cowboys-Storm rivalry in recent years is littered with epic battle and war-of-attrition moments, Saturday’s clash will be a true test of the respective squads’ depth – no fewer than nine regular first team players from both sides will be absent as they represent Queensland in the second State of Origin in Sydney on Wednesday.

For the Cowboys, halves Johnathan Thurston and Michael Morgan will be absent, as will back-row veteran Gavin Cooper and young debutant firebrand Coen Hess.

The Storm are heavier hit, as three of their regular spine – fullback Billy Slater, halfback Cooper Cronk and hooker Cameron Smith – plus centre Will Chambers and forward Tim Glasby, will all be out of the Storm team. The halves combinations of both sides offer up interesting scenarios in terms of match-ups and experience.

For the Storm, look at the largely untested combo of Cameron Munster and Ryley Jacks.

Munster is being groomed as the heir apparent to Slater at the back but has proven his versatility by being able to play in the halves as well.

His NRL career is 54 games old and he’ll be one of the more experienced Storm players in their backline.

Jacks is in his rookie year at the NRL after starring for the Sunshine Coast Falcons in the Queensland Cup last year.

He has just been re-signed for next year with the Storm after impressing in his nine games so far this season.

The Storm’s halves have a combined 63 games of NRL under their collective belt compared to the Cowboys’ 110 – with all of those games played by no-nonsense clubman Ray Thompson.

Shrugging off a chronic knee complaint week-in, week-out, the tough-as-nails Townsville product will be a steadying hand for the Cowboys, especially 21-year-old debutant Kyle Laybutt.

The Bundaberg product has been knocking on the door of an NRL debut for several weeks now, and finally gets his chance in Melbourne.

Look for Laybutt to do the bulk of the team’s general play kicking, while both he and Thompson are renowned for their solid defence … they’ll have to both be on their game in that aspect to counter the skill and athleticism of Munster and Jacks. Notwithstanding their missing Origin men, both sides will be without key forwards.

The Cowboys are getting used to life without inspirational skipper Matt Scott, who continues his good progress in rehabbing from a torn ACL, while the Storm will be without the services of boom prop Jordan McLean for several weeks, who has a fractured cheekbone.

McLean is signed to the Cowboys next year and will likely partner Scott in the front row.

The Storm are also without 2016 grand finalist Christian Welch (ACL), who is gone for the season.