As the new pre-season approaches, we continue our look back at the season that was for our North Queensland Toyota Cowboys...

The 2016 Cowboys NRL squad comprised 30 players, with 25 playing at least one game in the top-flight comp – including 20-year-old tyro Coen Hess who came into the team from the NYC squad for eight NRL appearances.

So, what of the remaining five players in Paul Green’s 2016 roster? All five are contracted to the club for at least another year and each one will be eyeing some NRL game time in 2017.

Having played 14 NRL games across 2014 and 2015, prop forward Hoare was a genuine chance of pushing for a bench forward’s spot in 2016 after an impressive under-20s career, and later for the Mackay Cutters – with whom he won a premiership in 2013 – in the Intrust Super Cup.

But after switching to the Townsville Blackhawks, the Cowboys’ newest feeder team, this year, the 25-year-old had his short-term playing future turned on its head when he sustained the second serious knee injury of his fledgling career.

His playing season at an end, Hoare took to rehab with gusto and is expected to be fit and firing in 2017, where he will press hard for one of those interchange forward spots.

Given that the club will be without front row stalwart James Tamou next year, Hoare has a golden chance to revive his NRL career. Signed to the Cowboys on a two-year deal at the start of the 2016 season, 21-year-old Burleigh Bears junior Shaun Hudson came north after a successful stint in the Gold Coast Titans’ under-20s squad, where he was named the club’s National Youth Competition Player of the Year in 2015.

The talented outside back arrived at the Cowboys alongside good mate and fellow former Titan Jahrome Hughes.

While he didn’t get an opportunity to showcase his wares at NRL level this year, Hudson produced a strong season with Cowboys feeder team the Northern Pride.

A former Queensland under-16 and under-18 representative, Hudson will return to the Cowboys fold in 2017, and will be competing against the likes of Javid Bowen, Gideon Gela-Mosby, Marcus Jensen and Kalyn Ponga for positions in an already talented Cowboys backline.

Signed to Todd Payten’s 2015 Cowboys NYC squad mid-way through the 2015 season, Bundaberg junior Kyle Laybutt was a revelation at the club.

Starting off the bench at under-20s level, it wasn’t long before the naturally gifted footballer was starting in games, the five-eighth helping take the young Cowboys to a preliminary final.

In 2016 and having graduated from NYC, Laybutt was offered a two-year deal at the Cowboys, the young playmaker spending a productive and successful season with the Townsville Blackhawks.

Laybutt will again be a major part of Blackhawks coach Kristian Woolf’s plans in 2017, but after a season training as a full-time rugby league professional, look out for him to press for an NRL debut, especially around Origin time. 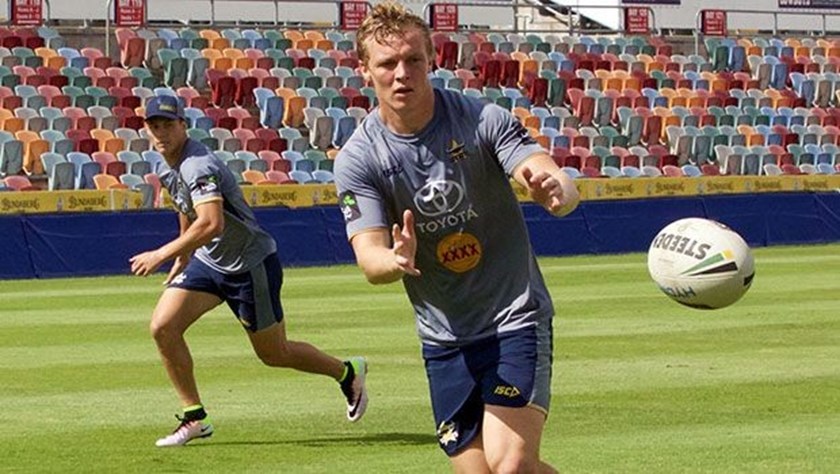 Powerful 21-year-old back-rower Patrick Mago was offered a two-year deal at the conclusion of the 2016 pre-season after training with the Cowboys squad over the summer.

The former Canberra Raiders NYC player is a two-time junior Kangaroo and noted for his toughness and power.

He spent 2016 plying his trade for the Mackay Cutters in the Intrust Super Cup, earning a reputation as an enforcer.

That uncompromising playing style did hurt Mago during the year as he was suspended several times.

With another Cowboys pre-season under his belt, Mago will be itching to make amends for the Cutters in 2017 and put pressure on his more experienced Cowboys teammates for a spot in the NRL team.

One of the standouts in Todd Payten’s 2015 Cowboys NYC team, New Zealand-born prop Uele was rewarded for his efforts with a two-year Cowboys NRL squad deal.

Playing behind a slew of entrenched first-grade front-rowers, the 21-year-old was always going to have to bide his time.

A solid season with the Mackay Cutters can only enhance his prospects of suiting up for the Cowboys in the top-flight competition next year.