The North Queensland Toyota Cowboys have had their National Youth Competition finals run ended at the preliminary final stage for the second straight year with a 32-16 loss to defending premiers Penrith Panthers today.

Trailling 22-10 at the break at Allianz Stadium, the young Cowboys roared back into the game courtesy of a try to inspirational hooker Brandon Smith, and a stunning turnaround was on the cards.

But two match-turning plays in the space of minutes were enough to see the Panthers home.

Firstly, the Cowboys made a stunning surge down-field courtesy of Gideon Gela-Mosby, who was eventually rounded up, but threw a speculative flick pass into the arms of a waiting Penrith player.

Then moments later – and still with time left on the clock for a match-levelling score – the Cowboys made a defensive error that led to speedy Panthers winger Daniel Brown tearing away for a pressure-relieving score.

The Panthers sealed the match in the 76th minute as interchange utility Wayde Egan crossed close to the post, in the second year that the Cowboys have finished one win short of a premiership shot. 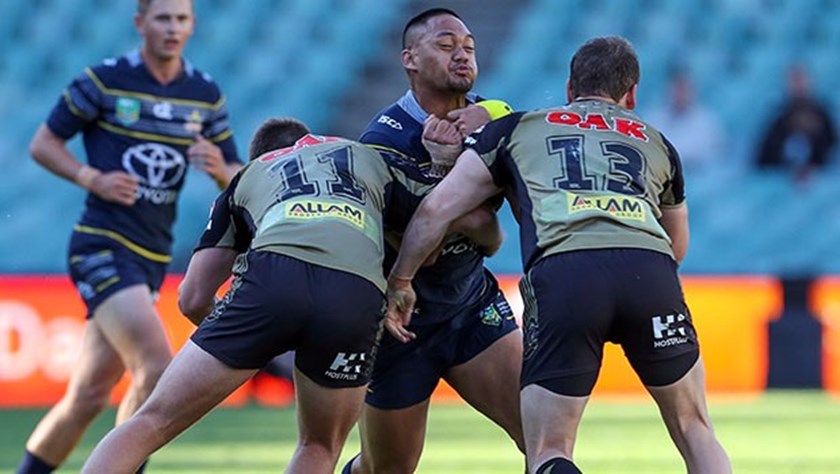 In a match riddled with errors and huge swings in momentum, the Cowboys got off to a horror start with the Panthers racing to an 18-0 lead before lion-hearted prop Nicholas Brown barged over in the 22nd minute.

Panthers winger Ratu Tuisese crossed in the 33rd minute to bring the lead out to 22-6, but the NYC’s leading try scorer for 2016, Marcus Jensen, restored a 12-point deficit (22-10) a minute later with a typically classy finish.

Smith’s courageous effort – his 18th of the year – bridged the gap to six points and the Cowboys had multiple chances to level the scores, with a Penrith player sent to the sin bin for 10 minutes for a professional foul.

Still, the numbers advantage wasn’t enough as decision-making under pressure led to the Panthers kicking away for a comfortable win.

The North Queenslanders weren’t helped by injury either with Jensen and bench prop Nick Lui Toso both taken from the field and not returning.

The Cowboys finished the regular season in second place on the NYC ladder with a 16-win, seven-loss, one-draw record.

The team also finished second in the 2015 regular season, losing a preliminary final to the Manly Sea Eagles. Presented by
6 hours ago