It should come as no surprise that five Raiders, three Storm and two Cowboys headline NRL.com's Team of the Year for season 2016. A try-scoring Titan, a productive Panther and a brutal Bulldog round out the game's best in the NRL Telstra Premiership.

Every week of the regular season the NRL.com team voted on the team of the round. Those votes were tallied to give us the 2016 Team of the Year.

Overcame a shoulder injury and finished the year with a broken jaw but Tedesco still managed to make his Origin debut for the Blues as well as produce 14 tries and over 100 tackle breaks for the Wests Tigers.

The Raiders flyer finished second on the NRL's top try-scorers list (20) and finished with equal-second most tackle breaks (127) competition-wide while forming a lethal combination with fellow Team of the Year teammate Joey Leilua.

Leilua saved his best highlight for last in the regular season when he pulled off the try assist of the year – a spinning flick pass around the back – for Rapana. Scored 11 tries and broke 118 tackles across 2016 and has been in irresistible form all season.

Croker finished the year as the NRL's highest pointscorer with 276 (17 tries and 104 goals), breaking a club record in the process. To put the Raiders skipper's season into perspective, his personal points tally was just 29 points fewer than what the Newcastle Knights scored collectively.

After making his New South Wales Origin debut this year, Mansour backed up his form at NRL level for the Panthers with 15 tries and a whopping 127 tackle breaks.

Moses's incredible back end of the year for the Wests Tigers was the main reason the club stayed in finals contention until the closing stages of the regular season. Moses finished in the top four when it came to try assists (18 – equal with three others).

One of the best players of all time, Thurston's form didn't falter throughout 2016. The Cowboys, Queensland and Kangaroos veteran finished equal-first most try assists (23) alongside Melbourne's Cooper Cronk.

The incumbent Kiwis captain Bromwich continued his stellar form as one of the world's best front-rowers. The Storm veteran averaged 144.6 metres and 30.4 tackles per game in 2016.

No statistic could measure the influence Melbourne, Queensland and Australian skipper Smith has over the NRL. Smith was the linchpin in the Storm's run to the minor premiership.

Graham finished the year with the most metres (4056) across the competition and still managed to average just under 40 tackles per game for the Bulldogs.

Papalii solidified his place as a Queensland Origin star for years to come in 2016. More impressively, the left-edge defence from the Raiders back-rower in protecting the likes of teammates Croker and Aidan Sezer was incredible.

Harris was thrown around the Storm's 17 but performed best when in his preferred back-rower position. Despite featuring at centre and five-eighth at different points of the year, Harris still managed to average over 130 metres per game.

Taumalolo was the only other player in the NRL (other than Graham) to break the 4,000-metre mark. The barnstorming Cowboys lock broke over 71 tackles in the regular season.

One of six players to play every minute of his team's season, the Broncos five-eighth was in sparkling form early in the year, before overcoming a mid-season slump. Kicked four field goals in the regular season in a promising sign for Brisbane's upcoming finals campaign.

James was the season's most prolific try-scoring forward (11 tries), equalling a record that has stood since 1950. It was his best season to date, with the Gold Coast skipper a large reason why the Titans made the NRL Finals.

The Sharks firebrand continued to impress on the field, helping the Sharks to a 15-match winning streak. Fifita averaged the fifth-most metres per game in 2016 with 169.1.

A big reason behind the Raiders' push to finish in the top two on the NRL Telstra Premiership ladder, Hodgson was rock solid in defence and a constant threat in attack with 16 try assists in 2016. 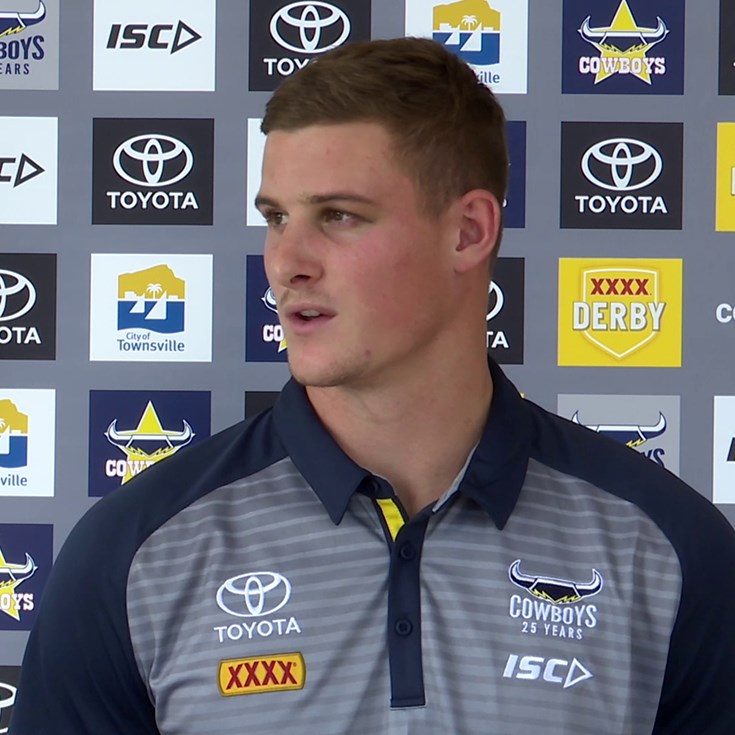 Dunn: I want to send him out on a good note

One of the toughest, most reliable I've played with: Scott

Thurston: You are one of the most selfless players I know