An away major semi, double-chance final awaits the North Queensland Toyota Cowboys as they rounded out their 2016 National Rugby League regular season with a 32-16 win over the Gold Coast Titans at a packed 1300SMILES Stadium tonight.

The five tries-to-three result was thrilling and frustrating in equal measure as the home side constantly let the Titans back into the game with small lapses at key times.

But the hosts scored some dazzling tries and played as a team, banding together to boast an equal league-best 11-1 home record and surge into the finals on the back of three straight wins.

The Cowboys finish the regular season in fourth and will play either Melbourne or Cronulla in week one of the finals.

Three Cowboys backs are locked in a battle for team-high try-scoring honours this year and classy centre Justin O’Neill put early bragging rights pressure on teammates Kyle Feldt (12) and Antonio Winterstein (11) with a superb finish in the fifth minute of the match for his 11th try of the year.

Riding on the back of early completed sets and superior field position, the Cowboys’ opening salvo was a masterclass in pinpoint execution.

After moments earlier failing to defuse a swirling Titans bomb – which didn’t end up costing the home side any points after the Titans immediately knocked on – fullback Lachlan Coote produced a sublime cross-field kick for a flying O’Neill who finished with class. 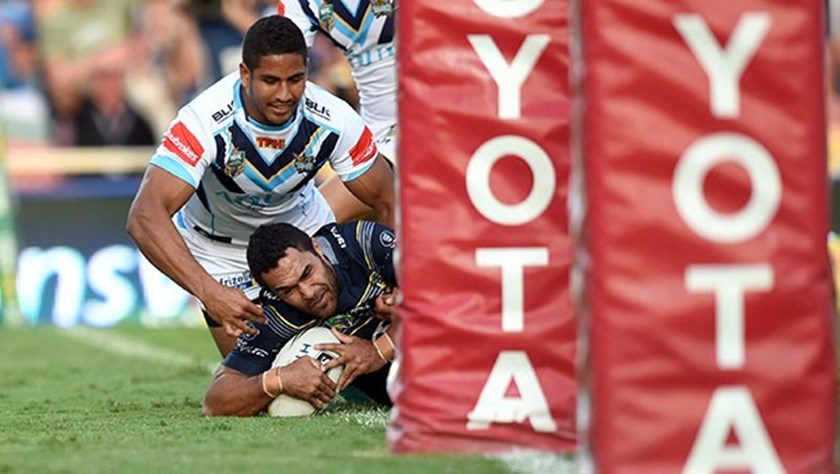 But after drawing level with his fellow back, O’Neill was soon surpassed by the veteran Winterstein in the try-scoring race as the Cowboys – riding on the back of a 100 per cent completion rate – took a 12-0 lead following their second four-pointer.

Not content with dominating possession and field position as the first half ticked down, the Cowboys’ ball runners were in an attacking mood as Feldt, Jason Taumalolo and Michael Morgan all made clean line breaks within minutes of each other.

But Morgan’s line break ended with him being legally stripped of possession and the Titans’ response to a shift in fortune was immediate and effective.

Having advanced the ball back down the field with a disciplined, powerful set, the Titans finished off with style as winger David Mead – a late inclusion from outside the initially selected 17 – leaped over the Cowboys’ back to touch down in the corner.

Tyrone Roberts added the extras as the home side held the slight advantage – 12-6 – going into the sheds.

Starting the second half defending stoutly, the Cowboys were soon on the attack when inspirational skipper Johnathan Thurston sharply fielded a loose ball and tore off down the field.

The play broke down and the Titans regained possession, but then the game’s highest profile players Thurston and Hayne came together in stunning fashion when the reigning Dally M Medallist put a massive shot on the returning-to-league superstar.

Enjoying a period of good-ball play, the Cowboys crossed for their third in the 47th minute as five-eighth Michael Morgan drifted across field with ball in hand, found Thurston, who in turn found left-edge partner Gavin Cooper, who did the rest.

Splitting the defence with a subtle dummy, Cooper found clean air, then rounded the final defender with deft footwork for his eighth try of 2016.

Thurston converted for a third time, then moments later kicked a penalty for the 20-6 lead.

Gold Coast firebrand prop Ryan James soon bridged the gap back to eight points with a barging effort in the 57th minute and all of a sudden the hosts had a real battle on their hands in the bid for fourth place at the end of the regular season.

With the game ebbing a little 15 minutes from time, the Cowboys produced a stunning play to earn repeat sets at the end of a Thurston kick.

Fielded by the Titans five metres out from their line, the Cowboys defence swarmed, holding the player up and driving him back, forcing the drop goal.

The Cowboys would then get maximum benefit from the play when giant prop James Tamou straightened the point of attack from a Coote pass to cross for a 28-12 lead.

Rangy back-rower Cooper crossed for his second at the death as the Cowboys ended up with a comfortable victory.

The Titans will now await their fate when the Tigers host the Raiders on Sunday.

A Tigers win will knock the Titans out of the top eight and end their season, while if the boys from the nation’s capital prevail, the Titans sneak into the finals.