The North Queensland Toyota Cowboys have completed an NYC shutout against the New Zealand Warriors at 1300SMILES Stadium, defeating the visitors 34-0.

Coming off the back of two straight losses, the Cowboys needed to bounce back against the Warriors, and the return of halfback Cooper Bambling from injury was an added boost to the home side.

Despite the return of the captain, it was Brandon Smith who led the way, although not from the usual spot at dummy half – he took the ball at second receiver instead and forced his way over at close range.

Smith followed it up with a run from acting half to bring up his second try of the night two minutes later.

Strong defence from the Cowboys was a highlight, as Gideon Gela-Mosby and Marcus Jensen both made try-saving tackles on opposite sides of the field.

The fatigue seemed to get to the Warriors as unforced errors crept in and the Cowboys capitalised late in the second half.

Ty Carucci went within inches of scoring, and Enari Tuala went all the way with a perfect line to dive over untouched on the next play.

The second half proved to be as one-sided as the first, with three tries to Marcus Jensen the only points scored.

The win places the Cowboys at outright second, where they could remain depending on the result of the Roosters-Dragons game tomorrow – if the Roosters prevail, they will jump back ahead of the Cowboys into second spot. 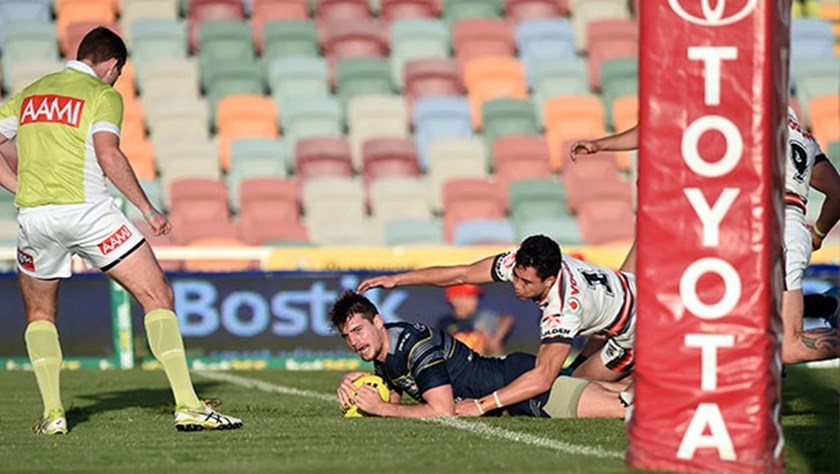