The North Queensland Toyota Cowboys have snapped a three-game losing streak and have officially booked a spot in the 2016 Telstra Premiership Finals Series with a classy 34-6 win over the New Zealand Warriors at 1300SMILES Stadium tonight.

The six-tries-to-one win was built on sustained pressure and some polished finishing as the defending NRL premiers posted their tenth home win of the season, moving to 30 competition points in the process.

That 30-point mark will safely see the Cowboys into the finals with regular season games against the Bulldogs and Titans remaining.

At the completion of Saturday’s Round 24 matches, the teams currently sitting ninth and tenth – the Warriors and Tigers – are on 24 points, meaning the Cowboys won’t be involved in a wrestle for those bottom top-eight spots.

It took a full four-and-a-half minutes for the first break in play, after five sets of end-to-end footy from both sides.

The Warriors were winning the early territory arm wrestle and had the first genuine try-scoring chance when a Cowboys' handling error was compounded by a conceded penalty in vulnerable field position.

The home side though, repelled the attacking raid and were soon on the march themselves thanks to a Warriors error down the other end.

Barnstorming lock Jason Taumalolo spilled the ball over the line at the eight-minute mark, but the Cowboys were steadily climbing into the game.

In the tenth minute, that threatening attack was turned into actual points as Kyle Feldt saluted for his 11th try of the season.

Feldt latched on to the perfectly weighted grubber kick from his 2015 grand final partner-in-crime Michael Morgan, but it was the lead-up work by Thurston and centre Kane Linnett that gifted the hosts prime real estate.

Thurston stripped Warriors halfback Shaun Johnson of possession in a tackle midfield, then shovelled the ball to a rampaging Linnett who ran 30m down field.

Thurston added the extras and it was another bit of great defensive work – this time from hooker Rory Kostjasyn – that led to the Cowboys’ second, which was eerily similar to the first.

Kostjasyn put on a bone-rattling tackle early in a Warriors set, forcing the turnover.

Morgan then found himself with ball in hand on the fifth from the ensuing set – he threaded a grubber through, it bounced off a Warriors player’s foot and into the arms of a grateful Feldt, who scythed over for his second try of the half.

The Cowboys third try – in the 23rd minute – was a combination of class and power as Thurston slipped a neat short ball to a flying Taumalolo who stepped and surged his way to a fifth try for the season. 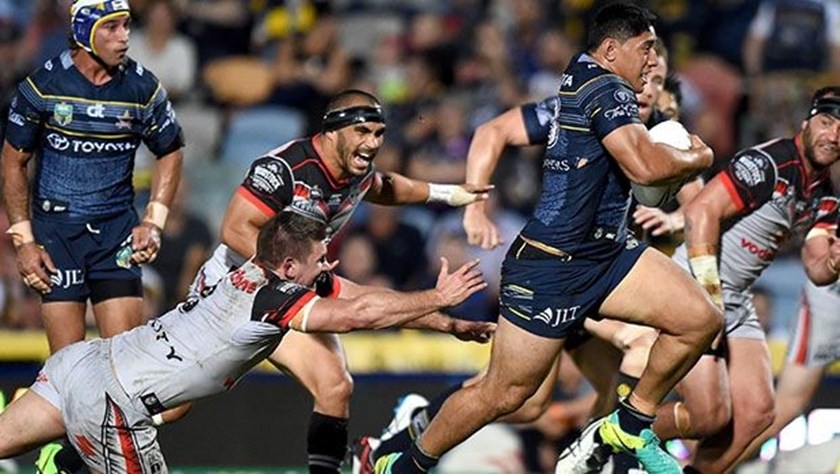 Thurston added the extras and the Cowboys had already scored three tries before half time, where they had managed a total of just four from their previous two games.

Almost against type, the visitors hit back with eight minutes remaining in the first half.

A Cowboys error on their line led to a Warriors scrum feed, and New Zealand skipper Ryan Hoffman speared over, taking advantage of some recalcitrant Cowboys goaline defence.

Johnson converted and the Cowboys' lead was cut to 16-6.

Four consecutive Cowboys sets followed the Warriors try as the clock ticked down to half time, and it was that fourth set that proved a bridge too far.

Justin O’Neill was the eventual recipient of the try – his 10th of the year – as Morgan skilfully kept the ball alive and Thurston switched the point of attack, coming around to the right to find O’Neill, who showed pace and power to crash over.

Thurston converted from out wide and the home side – who enjoyed 64% of possession in the first half – went into the break 22-6.

The Cowboys continued their controlled aggression in attack during the start of the second half and in the 53rd minute, the Warriors defence was again breached as reserve hooker Ray Thompson darted over from dummy half with his first touch of the footy and a 14th career try.

The Warriors, to their credit, keep chancing their arm despite victory seeming unlikely and a short kick-off and forced error had them threatening to score.

But the Cowboys’ scrambled defence prevailed on several occasions and young reserve forwards Patrick Kaufusi and Coen Hess – getting a chance with injuries to Matt Scott and Ben Hannant – revelled in some increased game time.

With victory in hand, the Cowboys – superbly led by Thurston – controlled the final quarter of the game with aplomb, forcing repeat set after repeat set.

Eventually, the Warriors’ defence cracked for a sixth time as Morgan flew on to an inside Thurston pass, the Test and Origin player showing his trademark leg drive to bust grasping tackles to cross in the 71st minute.

The team will now focus their attention on quickly preparing for their Round 25 opponents – the Bulldogs on the road on Thursday night, off the five-day turnaround.