The North Queensland Toyota Cowboys have survived a tough battle against a fiercely determined Manly Sea Eagles side to keep their perfect home record intact with a 30-26 win at 1300SMILES Stadium tonight.

Leading 18-4 at half time, the Cowboys were steamrolled in the opening 20 minutes of the second half and trailed 22-18, only to have big boppers Jason Taumalolo and James Tamou salute to clinch what was a tighter victory than many would have predicted, given it was third versus 14th.

This match marked just past the midway point of a tricky period for the Cowboys, who have been heavily represented in this year’s State of Origin series.

That blow prevented head coach Paul Green from resting any of his Origin stars tonight, and this entire nine-week Origin period is a true test of the club’s depth and flexibility.

Utility Rory Kostjasyn started the match in Morgan's pivot position, but it was fullback Lachlan Coote who did the early directing and general play kicking.

Manly played disciplined rugby league for the opening 10 minutes, constantly trying to find the sideline at the end of set to dictate the pace of play.

They nearly reaped early dividends when pressing close to the Cowboys’ line following a penalty and a handling mistake from the home side.

But pedestrian ball movement and lack of crispness in execution saw the raid repelled and the Cowboys had dodged an early, slow-moving bullet.

Once the Cowboys managed to maintain some pressure, points were in the offing, and it was a classic Cowboys movement that brought the first points.

Receiving the ball from dummy-half, co-captain Matt Scott pivoted and passed to fellow skipper Johnathan Thurston, who snuck the ball back inside to a rampaging Taumalolo, who sprinted through the gap and raced away to touch down on the 10-minute mark.

Thurston would add the extras, his 59th goal of the season coming at an impressive and league-best 88% success rate. LACK OF POLISH, THEN A STUNNING RETORT

The Cowboys continued to dominate field position and possession, but lacked the final polish to convert ascendancy into points.

Twice, kicks to high-ball specialist Kyle Feldt were a little off the mark, while the last pass on several promising raids came just a fraction late, or not at all.

To Manly’s credit, their resolve in defence buoyed their confidence and they hit back on the counter at the 23-minute mark.

Daly Cherry-Evans sprinted 50m after being put into space, with a stellar Jake Trbojevic offload the pass before cracking the home side’s defence open.

The Eagles failed to take advantage of the relatively easy conversion, and a 6-4 Cowboys lead was extended to 12-4 six minutes hence, and in breathtaking fashion.

With the backline spread deep and wide, a sizzling left-edge movement ended in an Antonio Winterstein try – his seventh for the season, but the lead-up work involved dummies, wrap-arounds and decoys until Coote’s long pass put the veteran winger over untouched.

HAVING A NIGHT OUT

Perhaps still smarting from back-to-back New South Wales Blues Origin snubs, Coote was having a whale of a first half, playing as a de facto five-eighth as Kostjasyn offered stability on the short side.

Having effected several pinpoint kicks earlier in the stanza, the recently re-signed custodian scored a brilliant ad-lib try in the 36th minute, latching on to a Jake Granville grubber as the home side showed they are just as comfortable playing free-wheeling rugby league as they are working within their structures.

Thurston was flawless with the boot in the opening half and the home side went into the sheds 18-6 ahead.

Undefeated at home in 2016, the Cowboys were in the box seat until 20 minutes of Manly mayhem to start the second half had the near 16,000-strong crowd shocked, as Addin Fonua-Blake – twice – and Siosaia Vave barged over from close range to turn a 18-4 deficit into a 22-18 lead.

The plucky, 14th-placed Manly side were soaring, sensing a boilover.

The Cowboys were making uncharacteristic errors and soft defence in the middle and close to their line – coupled with an energetic Manly bench quartet – conspired to have the defending premiers seriously on the back foot.

The Cowboys – stung by the Manly comeback and nursing wounded players including centre Kane Linnett leaving the field – wrested back the ascendancy as first James Tamou and then Taumalolo scored powerful tries, Taumalolo’s second again on the end of sparkling pass but this time involving a brutal bump off Manly fullback Brett Stewart.

Manly would reply to get it back to four points with six minutes remaining, but the brave visitors ran out of time, the 30-26 win the Cowboys tenth of the year as the side head into back-to-back road trips, against the Rabbitohs and Raiders. 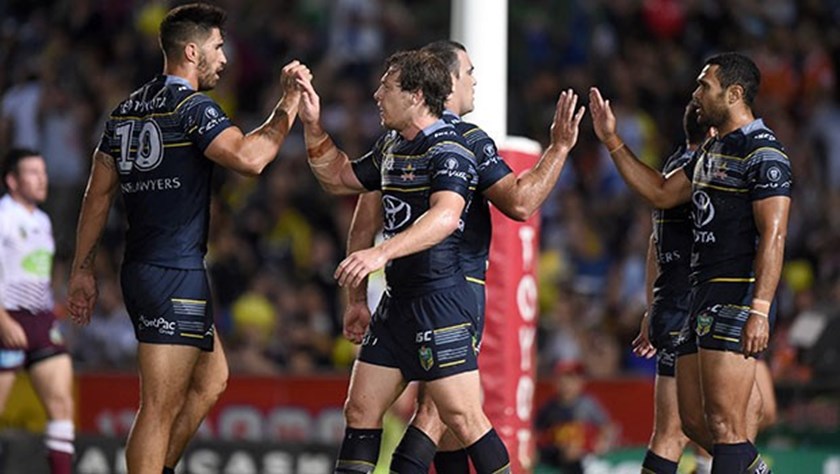