There was no State of Origin hangover for the North Queensland Toyota Cowboys after they blew the Newcastle Knights off the park 46-16 tonight.

The eight-tries-to-three rout featured some sparkling Cowboys attack, highlighted by a first-half double to five-eighth Ray Thompson, who celebrated his 100th game for the club in style.

Thompson was a late call-up for Origin utility Michael Morgan – who had to sit out due to the NRL’s concussion protocol – and didn’t waste any time making his mark with tries in the 21st and 35th minutes.

The win moves the Cowboys into third place on the ladder after the Warriors upset the Broncos earlier in the day.

The Cowboys warmed their way into the match, conceding an early penalty before producing a solid if unspectacular opening set.

A Knights mistake down the Cowboys’ defensive end a set later allowed the home side to reassert their superiority through field position.

Some astute kicking from five-eighth Thompson gifted the Cowboys a repeat set, which paid immediate dividends.

TONES IN THE CORNER

Some trademark crisp backline play, orchestrated by fullback Lachlan Coote, saw left-edge winger Antonio Winterstein cross in the 12th minute and the Cowboys were away in front of 14,651 fans.

Backing up from Wednesday’s brutal Origin opener, co-captain Johnathan Thurston piloted the sideline conversion attempt over the crossbar and a 6-0 lead was the Cowboys’ after a quarter of an hour.

BUT IT ONLY TAKES ONE LAPSE

After Winterstein’s try, the Cowboys continued to look sharp in attack, with co-captain Matt Scott doing major damage up the middle with his neat offloading game.

But to the Knights’ credit, they stood tall in defence and then produced a sizzling try against the run of play in the 19th minute.

Centre Nathan Ross made a clean line break and streaked away to find winger Cory Denniss streaming downfield in support, with Denniss saluting out wide.

Halfback Trent Hodkinson added the extras and it was all locked up at 6-all.

Kyle Feldt’s towering restart forced an error, and five-eighth Thompson showed nice awareness to slice through the defensive line from short range for a 10-6 lead, with maestro Thurston extending the lead to six points. 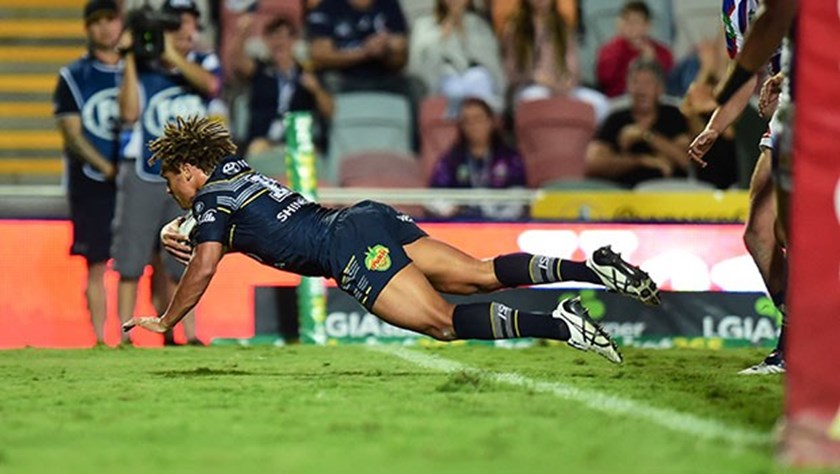 The Cowboys would cross for their third moments later as wily veteran Gavin Cooper bluffed everyone with a short-side run from dummy-half, the sneaky try and Thurston’s conversion made it 18-6.

Regular No.6 Michael Morgan was missing, but it was a signature play normally involving the livewire pivot that produced the home side’s fourth try of the opening half.

Coote passed to interchange forward John Asiata, who then delivered a deft little pass to a flying Thompson who streaked through the hole for his second try in his 100th game for the club.

With Thurston in rare form with the boot, NQ maximised their advantage and went into the sheds 24-6 ahead.

It took just four minutes into the second half for the Cowboys attacking juggernaut to continue when super-sub Asiata broke the line with strength and a lovely show-and-go, and then found a streaking Jake Granville for a try under the posts.

With the Knights outmatched across the park, the tries started coming quickly, and the home side’s fifth was all class from Coote.

Moments after copping a heavy high shot, Coote produced a sublime cutout ball to Kyle Feldt to extend the lead to 36-6.

Thompson went centimetres from scoring a third try moments later, but was just pulled down, allowing bench forward Rory Kostjasyn to crash over from dummy half for a 42-6 lead.

The Knights would score a consolation try through winger Jake Mamo – another long-range effort from the visitors – and Feldt put the icing on the contest with his second in the 74th minute.

The Knights would score in the final minute thanks to interchange player Lachlan Fitzgibbon.