The North Queensland Toyota Cowboys are a perfect two from two at home following an impressive 40-0 shutout of the Sydney Roosters at 1300SMILES Stadium tonight.

With impressive defence and at-times crisp execution the Cowboys put on a much-improved showing against the winless Roosters than in last weekend’s 20-16 loss to the Eels to chalk up their second win of season 2016.

In front of a hardy crowd in slippery conditions following a week of heavy rain in Townsville, North Queensland were in control of the match from the opening exchanges as early four-pointers to Kane Linnett and his left-edge partner Antonio Winterstein set the tone from the outset.

Ball control was the big turnaround from the Eels match as the team completed at above 70 per cent, up 10 per cent from last week – and in much more difficult conditions.

Second-half tries to Scott Bolton and Michael Morgan sealed the match and the Cowboys will go into their Round 4 match – and 2015 grand final replay – against Brisbane next Friday in winning form.

The seven-tries-to-none rout is the first Cowboys’ clean sheet since their 39-0 whitewash of the Sharks in week two of last year’s final series.

The Cowboys signalled their intentions early with a solid first set leading to a repeat after big Roosters winger Daniel Tupou was forced back into the in-goal following a smart Thurston kick in the ninth minute.

The home side then scored from the ensuing set as centre Kane Linnett sliced over following smart passing out the backline. 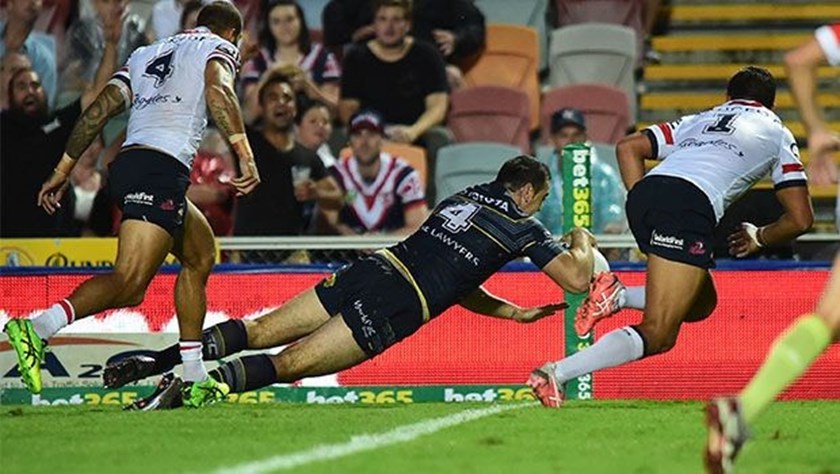 Thurston converted from out wide and it was 6-0 after four minutes and the early signs were that last week’s handling errors against the Eels were a distant memory.

The Cowboys were in a mood on their left edge as, only minutes after the Linnett try, his wingman Antonio Winterstein crossed as Jason Taumalolo, Thurston, and Lachlan Coote were on song with their passes to find their unmarked teammate.

Thurston again piloted a tough conversion over and the Cowboys were 12-0, the scoreline outpacing the game clock.

It was fast-moving Cowboys defence that forced a Roosters error deep in their own half that led to the try-scoring set and the home side was in an aggressive, attacking mood early despite the slippery conditions.

Winger Kyle Feldt typified that attitude when, in the 16th minute, he beat three defenders to work his way back into the field of play when fielding a fifth-tackle kick in his team’s in-goal area.

The Roosters were starting to find their feet in attack, with giant Kiwi winger Shaun Kenny-Dowall making a clean break.

A promising Roosters’ raid on the next play was soon snuffed out when veteran back-rower Gavin Cooper collared Roosters five-eighth Jayden Nikorima on the fifth tackle.

The Roosters continued to ask plenty of questions through the middle of the ruck, but the Cowboys’ last line of defence remained stoic.

After wrestling back field control with 15 minutes in the half remaining, North Queensland came perilously close to touching down a third time as Michael Morgan lost the ball trying to ground it after latching on to a great Thurston short ball.

A prime Cowboys scoring opportunity was thwarted by their own hand in the 33rd minute as Jake Granville was penalised for an incorrect play-the-ball, the second such infringement called in the opening stanza after the Roosters were pinged for the same offence earlier.

A final NQ raid down the left looked to have rounded out the half as fullback Coote split the defence but his pass went to ground and the 12-0 scoreline racked up after 10 minutes looked like being the score going into the sheds.

But a Roosters error – where they kicked out on the full after their set – allowed the home side one last crack and they didn’t disappoint as Coote speared over next to the posts following a set move.

Thurston converted and an 18-0 scoreline at the break augured well for the second half.

The Cowboys got their second set of the second half off to a horror start with Gavin Cooper knocking on early deep in his side’s territory as the Roosters pressed for the first score of the stanza.

The Roosters were equally inept as Ben Hannant put on a big shot to force the early error.

The Cowboys were then marched down the field and poised to attack when reserve prop Scott Bolton took a ruck up, but continued to power through feeble defence and plant the ball for a perfect start to the second.

Thurston’s rudimentary conversion ballooned the score out to 24-0 after 51 minutes and a return to the winner’s circle looked likely.

That result was franked in the 67th minute when Morgan scythed over in trademark fashion using speed and strength.

The Cowboys’ only injury concern immediately after the match was Jake Granville who copped a head knock in a tackle late in the match.

A bullocking run and barge over by Jason Taumalolo in the 75th minute put an emphatic exclamation point on the match as Thurston piloted over his fifth conversion of the match.

Feldt scored just before the final bell for good measure as Thurston kicked his sixth goal. 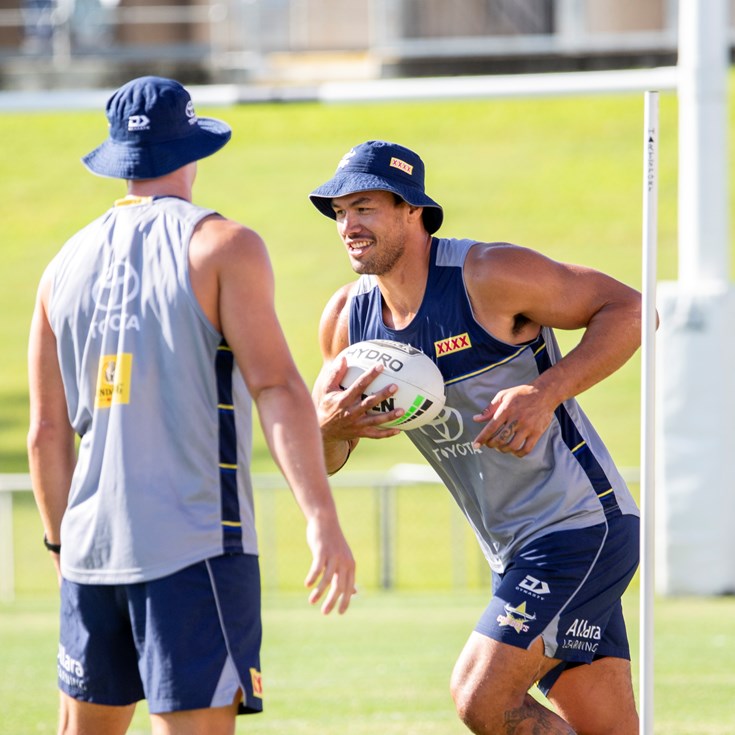