• Join the team behind the team – 2016 corporate membership

The North Queensland Toyota Cowboys will get to show their wares in front of the Cairns faithful with a round 17 NRL Telstra Premiership match against the South Sydney Rabbitohs included in the 2016 National Rugby League draw.

With the draw announced today, the defending premiers will play the 2014 premiers at Barlow Park on Sunday 3 July in one of several NQ blockbusters confirmed for the season.

And while it will be an official Souths home game, the match is expected to draw fervent Cowboys support given the Far North Queensland capital is squarely in Cowboys country.

“This Round 17 game is going to be fantastic drawcard for our members and supporters in the Cairns region,” said Cowboys CEO Greg Tonner.

“We expect Barlow Park to be packed with screaming fans in what will be a memorable afternoon for the Cowboys and the NRL.”

The Cowboys kick off their home-and-away season against the Cronulla Sharks at 1300SMILES Stadium on Saturday 5 March, a re-match of the 2015 semi-final match in Townsville.

“That finals match attracted nearly 22,000 people and we’d be expecting a massive turnout for this fantastic season opener against the Sharks, with whom we built a fierce rivalry in 2015,” Tonner said.

“Another match that should also be circled in the calendar is our round 11 match against the Broncos at 1300SMILES Stadium on Friday 20 May. We want to top the near 25,000-strong crowd we received at the corresponding match last year.”

But before that epic match, the Cowboys will travel to Suncorp Stadium in round 4 (25 March) for an epic grand final rematch against Brisbane.

Other Cowboys draw highlights include: 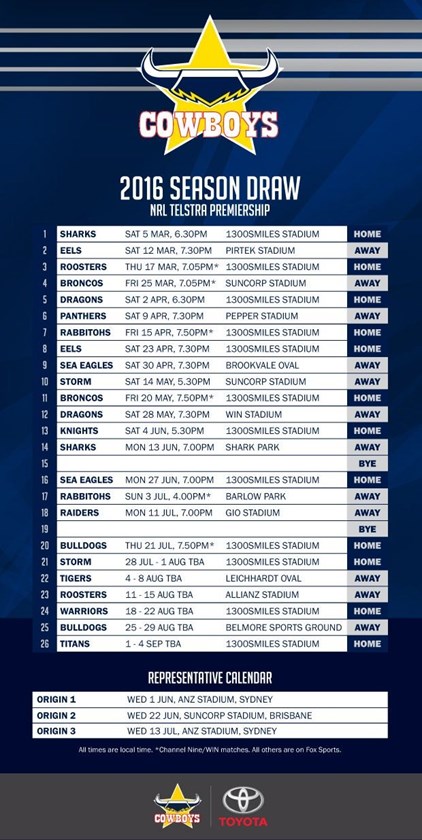 Presented by
19 mins ago