It’s that fantastic time of the year again – finals time – and the week got off to a flyer with the traditional Captains’ Call at the Sydney Cricket Ground on Monday morning. This is the grand media event where player representatives from the eight finals teams gather for a block of photo shoots, filming opportunities and interviews. Backrower Gavin Cooper was the club’s representative on the day, with the veteran forward meeting his obligation with grace and good humour. He got some gentle ribbing from Bryan Fletcher and Nathan Hind marsh when filming a segment for the Matty Johns Show, with the former players needling Cooper for the fact Hindmarsh verbal sparring partner Johnathan Thurston did not make the trip to Sydney. Thurston and Hindmarsh have had a weird thing going via the show this year where they have traded insults about each other’s career. Cooper gave as good as he got in the good-natured sledge session. 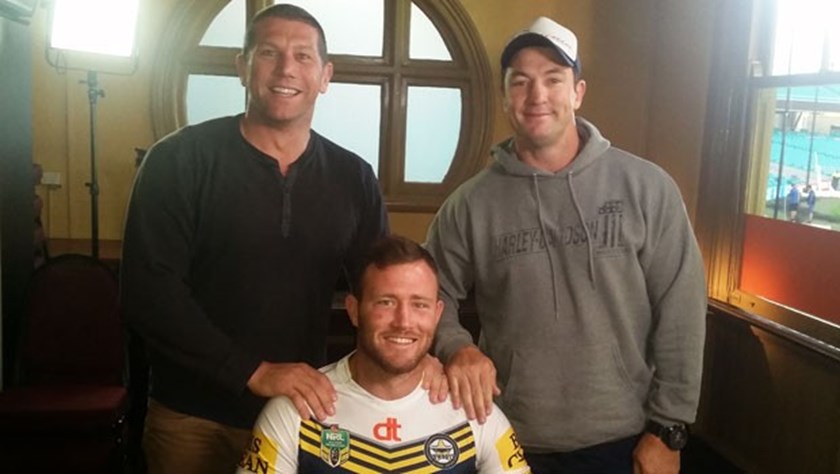 Also while at the SCG, Cooper caught up with legend rocker Jimmy Barnes, whose wife Jane is a huge Cowboys fans. Cooper turned from celebrity sports star to celebrity chaser when he asked Barnesy for his autograph. That Cooper asked Jimmy to sign the playing jersey he wore for the morning raised a few eyebrows, with one panicked staffer concerned of the repercussions of allowing a jersey to be signed which was supposed to be returned to the gear room in Townsville. But all it took was a phone call from Cooper and all was sweet and the Murgon product had a valued signature. One of the features of the Captains’ Call is the epic eight-man shot overlooking the Sydney CBD, usually shot in front of some fancy pyrotechnics. After the obligatory photo, the players were then handed over to the media for interviews. While speaking to a Courier-Mail journo, Cooper felt a warm sensation as an over-enthusiastic technician gave the flame machine an unplanned burst. 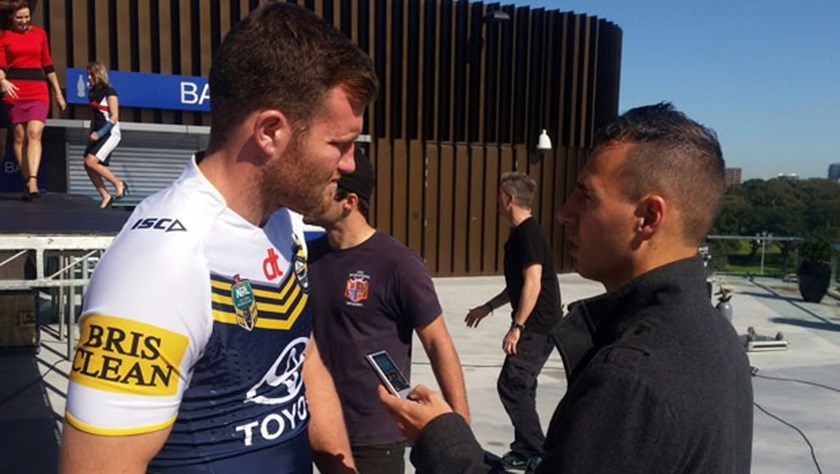 There was a bit of controversy surrounding the fact that Cowboys and the Storm didn’t fly their injured and ill skippers Thurston and Cameron Smith to the event. While it all died down pretty quickly the issue made a predictable splash on social media, with one wag noting that Smith made be charged with "Grade Two Refusing To Stand In Front Of Flames”.

And while two out-of-town clubs copped some heat for who they sent, it’s worth noting that the Cowboys, the Storm – and the other team represented in the finals from outside Sydney, the Broncos – were the first three clubs to arrive at the SCG for the session. On occasion, Cowboys members and supporters get the chance to rub shoulder with the players, with that moment often taking the form of attendance at a training session. Townsville-based Cowboys member Peter Neimanis, wife Kathleen and daughter Greta watched the Cowboys train on Monday. The trio were thrilled to be able to see the team at work, and co-captain Thurston stopped for a quick photo. The Neimanis family are keen road runners and regulars on the local running scene. They run clinics on Tuesday and Thursday mornings at Riverway under their Running Works Townsville banner.  Peter is in remission from cancer and is enjoying teaching the sport he loves to Townsville’s budding road runners. And he loves chatting about the Cowboys at any given opportunity.

Presented By Hisense 16 hours ago