Ponga, playing in just his fourth NYC game, raced in a hat-trick as the young Cowboys built on a 30-8 halftime lead to run out winners for their 11th straight triumph of the season. The talented teen crossed for the game’s opening try in the seventh minute and two more four-pointers in the space of two minutes early in the second half put the seal on his best NYC outing to date, the teenager now having scored five tries in four matches to kick-start his NYC rugby league career in fine style. Four conceded tries, though in the last 12 minutes of the match would have concerned NYC Cowboys coach Todd Payten, especially with just three games remaining before finals.

But the home side did enough in the first half to secure a 17th win of the season and again temporarily move back into first place on the competition ladder. Following Ponga’s opening salvo, Cowboys halfback Cooper Bambling scored an impressive individual try and Payten’s young charges looked in the mood to pile on the points in perfect conditions in front of an enthusiastic crowd.

But bullocking Souths centre Siosifa Talakai crossed in the 17th minute to put the 16th-placed Bunnies back in the frame. The fightback would be short-lived, however as Cowboys wingers Scott Schulte and Gideon Mosby saluted within four minutes of each other, Mosby’s try giving him the outright all-time NYC tryscoring record, with an amazing 30 for the season. The Torres Strait product made it 31 four minutes later, while Bambling’s second gave the home side a comfortable cushion approaching the halftime break. 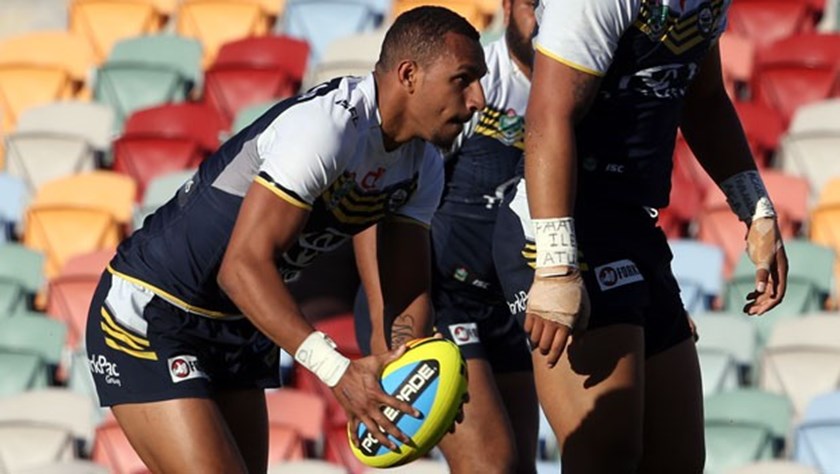 Souths winger Irae Somine crossed on the stroke of halftime to give the Bunnies a hint of a boilover.

Classy Cowboys five-eighth Kyle Laybutt opened proceeding early in the second half, while Ponga’s second and third tries before the 50-minute mark finished the game as a contest as the home side led 44-8. To the Rabbitohs’ credit, they refused to wilt and piled on four answered tries in the final 12 minutes to add huge respectability to the scoreline.