The North Queensland Toyota Cowboys have had their record-breaking NRL winning streak broken in dramatic fashion with a plucky Cronulla Sharks surging back into the contest to claim a 24-18 win at 1300SMILES Stadium tonight.

The visitors surged back into the contest in the second half after trailing 18-0 going in the break.

In that first half, the Cowboys were able to score tries comfortably without maestro five-eighth Johnathan Thurtson.

A trademark Jake Granville 50m scoot from dummy half followed by brilliant team tries – scored by Justin O’Neill and Antonio Winterstein – had the home side ahead 18-0 within a blistering 14-minute period in the first half.

Completing sets at 67%, the Cowboys would be forgiven for thinking they had room for improvement in the second half, but they couldn’t have started that stanza any worse, as three consecutive conceded penalties led to Sharks veteran Luke Lewis crashing over.

That 42nd-minute effort was followed by similar form from bench forward Sam Tagataese eight minutes later as the Cowboys failed to show poise with ball in hand.

Following the match, head coach Paul Green was critical of his team’s fifth-tackle options, but said speculation over the result if Thurston – rested for the clash – had played was pointless.

When Fifita scored a try of his own in the 61st minute, the Sharks had reeled in that deficit in just 21 minutes.

And with the game in the balance, it was the eighth-ranked Cronulla side who chased the result harder, with dogged defence backed up by Ennis’s crafty dummy-half play and Barba’s broken-field running. Ricky Leutele scored the go-ahead try four minutes after Fifita levelled the scores, and the Cowboys never seriously threatened to level despite nearly 15 minutes remaining on the clock.

The result in the main game, though, was a blot on an otherwise glorious afternoon of rugby league entertainment, with the early NYC match – won 56-10 won the Cowboys – followed by a thrilling 4-all draw in the Queensland v New South Wales Women’s Interstate Challenge and the final of the Laurie Spina Shield under-11s carnival, won 16-8 by Townsville club Western Lions Pride.

Tonight's loss puts the Cowboys in outright second place on the NRL ladder on 24 points with the 11 wins, four losses and the bye.

The team’s next opponent is the St George Illawarra Dragons in Wollongong on Saturday 4 July. 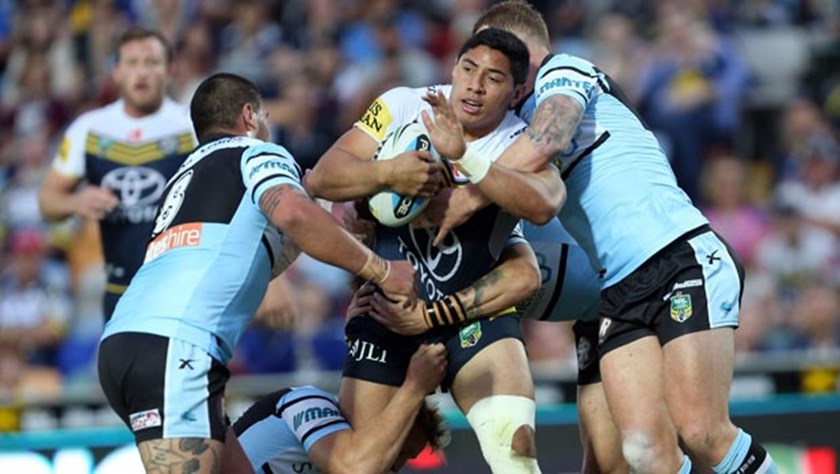