Co-captain Johnathan Thurston bagged a double in the five-try romp at ANZ Stadium as they took care of the reigning premiers 30-12 in their second away win of the season.

It was far from a perfect start for the Cowboys after a penalty in the first minute put Souths in perfect attacking position and on the fourth tackle Issac Luke’s cut-out pass from dummy half found Dave Tyrell who crossed for the opener.

Luke converted to give them a 6-0 lead.

Just as swiftly, back-to-back penalties put the Cowboys on the attack and on the last Johnathan Thurston chipped the ball perfectly for Justin O’Neill to rise above Alex Johnston and get their first. Thurston created another opportunity when a cut-out ball found O’Neill unmarked down the right hand side, but his pass back inside went forward and Bryson Goodwin cleaned up, ending the raid.

But it would be the Rabbitohs who would be the next to cross after Luke picked up a rebound from a Thurston kick and ran 20 metres before being brought down by Michael Morgan.

From the next tackle Greg Inglis spun it wide and found Johnston who found the line – Luke made it 12-4.

O’Neill was again finding space down the right hand side, and while Lachlan Coote was in support on the inside the fullback was dragged down 10 from the line.

Jake Granville tried to burrow over from the next tackle but was held up.

The Cowboys were handed another three sets but couldn’t break through the premiers' defence.

After soaking up plenty of attack Souths got a free ride down the park and Greg Inglis darted over from dummy-half – while Adam Devcich gave it a try on-field it was overturned by the video ref after Inglis was deemed to have lost control.

Then with only two minutes on the clock the Cowboys halfback rolled the ball into touch to get a repeat set.

On the fourth tackle they swept it left with Michael Morgan stepping back inside Glenn Stewart to cross, but it was called obstruction and ruled a no-try, South Sydney going to the break 12-4 up.

After a first half that included 12 penalties, both sides were keen to clean up their discipline. 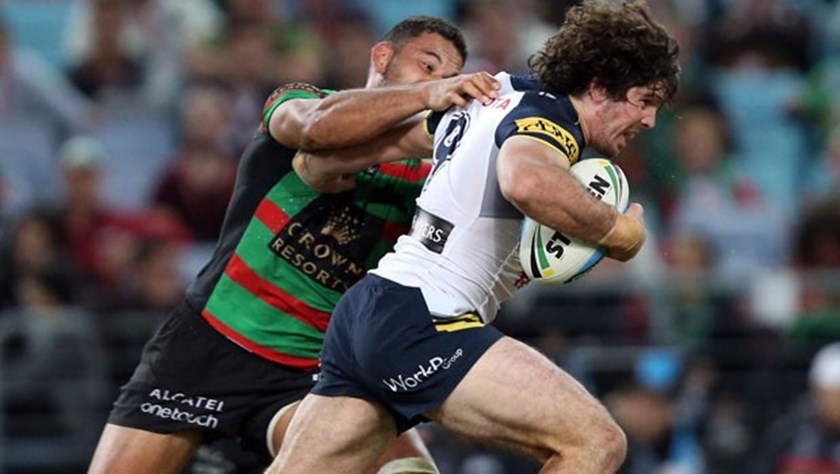 It only took 45 seconds for the Cowboys to make an impact with Gavin Cooper busting through on the second tackle to find Thurston on his hip to run over untouched.

Ben Hannant was producing some huge metres at the start of the second to have the Rabbitohs defence back-peddling and when he drew a penalty right in front, Thurston nailed the two and levelled it 12-12 at the 48-minute mark.

A Ben Lowe charge-down on Thurston’s kick then gave them a set of six right on the 20 metres.

That sent it to the left-hand side to create the overlap and Kane Linnett found Antonio Winterstein who was strong enough to hold off Inglis to score and put the North Queenslanders in front for the first time 16-12, Thurston perfect from the side to add the extras.

It was a grind in the final 10 minutes as Souths threw everything at the Cowboys up the middle.

But it took some crafty work from Michael Morgan to break the line and find Thurston on his inside to score his second of the night, the co-captain converting his own try.

They weren’t done with as hooker Jake Granville scooted 60 metres before turning Inglis inside out to score their fifth try of the match and wrap up their third straight victory.