The North Queensland Toyota Cowboys have suffered their third straight loss of the season with a 44-22 defeat at the hands of the Brisbane Broncos.

The home side ran in eight tries in front of 40,047 fans at Suncorp Stadium.

There were good signs from the first set with the Cowboys going 58 metres and showing plenty of spark.

A spilt Johnathan Thurston bomb by Jordan Kahu saw the Cowboys with their best chance of the match – on the second tackle Jason Taumalolo barged over the line to put the ball down but the video ref ruled obstruction. 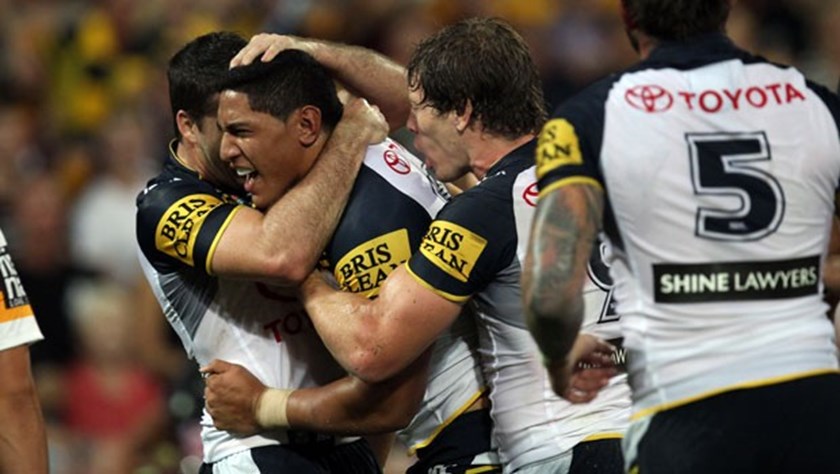 Off the back of a penalty Ben Hunt showed his strength for the Broncos beating James Tamou and Lachlan Coote to post the first points of the match.

Corey Parker converted for a 6-nil scoreline after 7 minutes.

A good tackle by Thurston on the halfway mark saw Hodges drop the ball, handing the visitors the ball and the opportunity to attack.

On the last Thurston’s cross-field kick again had the Broncos on the back foot but Tautau Moga couldn’t find the line.

Momentum swung again after a dropped ball and the Broncos rolled down the field before Josh McGuire added another four to put them out to a 12-nil lead.

The Cowboys again got their chance and this time they converted after Kahu spilt the ball in the tackle to give the visitors a look.

Michael Morgan then found some space close to the line to score their first and Thurston added the two to make it 10-6 at the 17-minute mark. Morgan was again called on, this time in defence after Lachlan Maranta made an 80-metre run, before he was stopped 10 out.

But there would be plenty more pain to come for the Cowboys as the Broncos put on four more tries before the end of the half.

Maranta would bag two to lead 32-6 at half time.

Twenty missed tackles in the first half didn’t help the North Queensland side's cause.

Two minutes into the second half, the Cowboys struck back.

Lachlan Coote rose above Kahu to take a Thurston highball and knocked it back to Gavin Cooper who tunnel-balled it out the back to the number seven, Feldt finishing it off to put them back in the game.

Thurston converted his second to make it 32-12.

Brisbane picked up their seventh try when Justin Hodges crossed and made it even tougher for the visitors.

It was becoming one way traffic as Kahu crossed in the 56th minute to hand Brisbane an unassailable lead.

A rare mistake from the Broncos saw Feldt run 80 metres to score his second of the night, Thurston adding another two.