Two tries to Tautau Moga and the return of Matt Scott to the North Queensland Toyota Cowboys lineup were some of the highlights of their 30-10 trial win over the Gold Coast in Cairns.

Johnathan Thurston again pulled the strings for North Queensland as they showed their pre-season form to come in six tries to two.

On a hot and sticky night at a packed-out Barlow Park, the Cowboys fired the first shot as the backline switched into gear with Moga breaking through in the 10th minute. 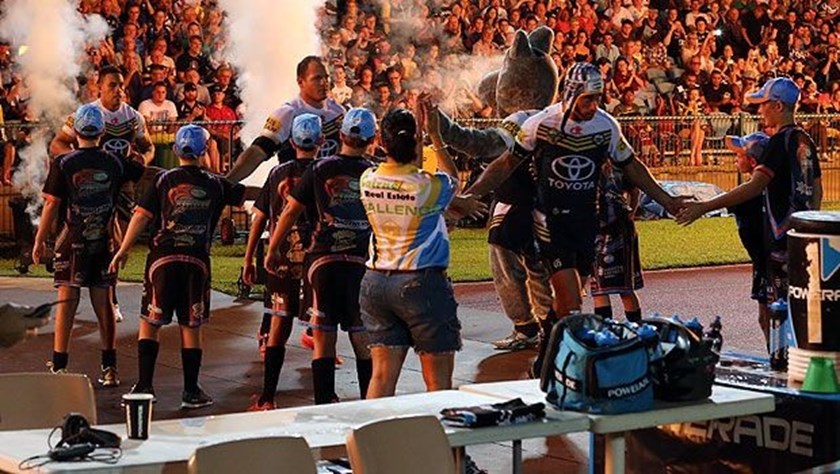 They very nearly scored again when Matt Wright found space down the right before Justin O’Neill was held up.

The Cowboys dominated the middle stages, and it wasn’t long until Johnathan Thurston put the ball on the boot and Wright latched on to a spilled cross-field kick to bag their second.

The captain converted making it 10-0 after 25 minutes.

But just as the Cowboys looked in control, Titans hooker Matt Srama snuck over from dummy-half, Aiden Sezer adding the extras to put them down by four.

The Thurston – Gavin Cooper combination then kicked in to ensure they would head to the sheds in command, 16 to 6.

Coach Paul Green continued to rotate the bench, with Lachlan Coote making way for Michael Morgan to shift to the fullback spot for the second half.

Replacement hooker Jake Granville, Moga and Kelepi Tanginoa all scored within 10 minutes to steal the game away from the Titans by the 65th minute.

Matt Scott lead the way up front with a solid performance in his first game back from a shoulder injury.

The Titans scored a consolation try three minutes before the hooter, as the Cowboys rounded out their pre-season with a convincing 30-10 win.

Antonio Winterstein was replaced midway through the first half after he suffered a hamstring strain which will be assessed by staff during the week. Presented By Sportsbet 3 hours ago
02:22