The Toyota Cowboys have paid tribute to the Australian Defence Force and each of the 249 players who have worn their colours in an NRL game in their 2015 range of jerseys revealed today.

To commemorate the Anzac centenary, North Queensland will wear a one-off Defence Force jersey in their Anzac Day match in the coming season, while the new Heritage jersey, which is part of the club’s 20th anniversary celebrations, is based on the original 1995 design and features the name of every Cowboys player.

It will be worn in the first home game of the season in March. 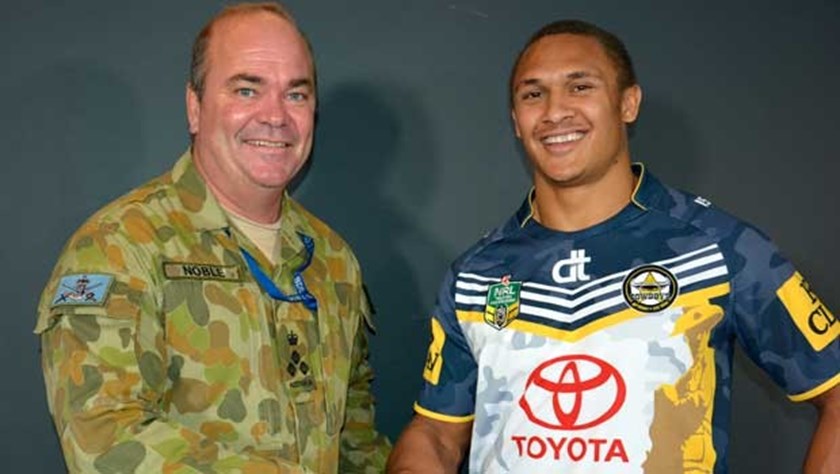 It also features the silhouette of an Australian digger with his head bowed in solemn reflection.

The Defence Force jersey has special meaning for Thompson, whose father is in the Australian Army.

“It will be a very special honour if I get the chance to wear this jersey in April,” Thompson said.

“Our club has close ties with the Defence Force with Townsville being a garrison city and mine are even closer because of my dad who is a huge role model for me with the dedication and commitment he has to his job and his country.

“I know the boys will be very proud to pull on this jersey for Anzac Day as a tribute to all of our ADF members, past and present.”

Luke Duffy, from digitalMURRIART, has produced the artwork for the Indigenous strip, taking his inspiration from the love of his culture – he hails from the Kalkadoon people of North-West Queensland - and his passion for rugby league.

“The design on the sleeves represents unity and pride of our Cowboy players who are, to me, our modern day warriors,” Luke said.

“The side of the jerseys is about community connections and participation with the Cowboys players and club embracing the journey to victory.

“The bottom of the jersey represents the Aboriginal and Torres Strait Islander community coming together to support and encourage our Cowboys team. The symbols I have selected in this design represent instruments of our culture, the didgeridoo and the warup, that have significant purpose and meaning in our celebration and ceremonies.”

The popular home and away strips remain the same as the 2014 season, with the addition of the 20th anniversary logo and new jersey sponsors Brisclean and Dreamtime Training, who appear on all six jerseys. This is the fifth year that ISC has been the Cowboys’ apparel partner.

“The off-field range will represent the very best in design and fabrication in what we believe is the best range of on-field jerseys ever produced.

“Season 2015 is going to be an exciting year for the Cowboys and we look forward to sharing the journey with them.”

The home jersey is available at the Cowboys Team Shop now with 2015 members receiving a 10% discount off their purchase.

The other five jerseys can be pre-ordered and are expected to be available in December/ early January.