After amazingly fighting their way back from 30-0 down against the Sydney Roosters, a courageous North Queensland were beaten 31-30 to bow out of the premiership race two games short of the grand final.

A James Maloney field goal inside the final five minutes allowed the reigning premiers to move on after they almost became the victims of the biggest ever comeback in an NRL match in front of their home crowd.

Cowboys co-captain Johnathan Thurston had a possible match-winning try in the 80th minute controversially denied by the referees and video referees, who ruled there had been a knock-on from Robert Lui in the lead-up.

During the fightback, JT, who won Channel Nine’s man-of-the-match award, set a new club record for most points in an NRL season.

With his team now out of the premiership, Ashton Sims has played his last game in Cowboys colours but he again distinguished himself up front for NQ. 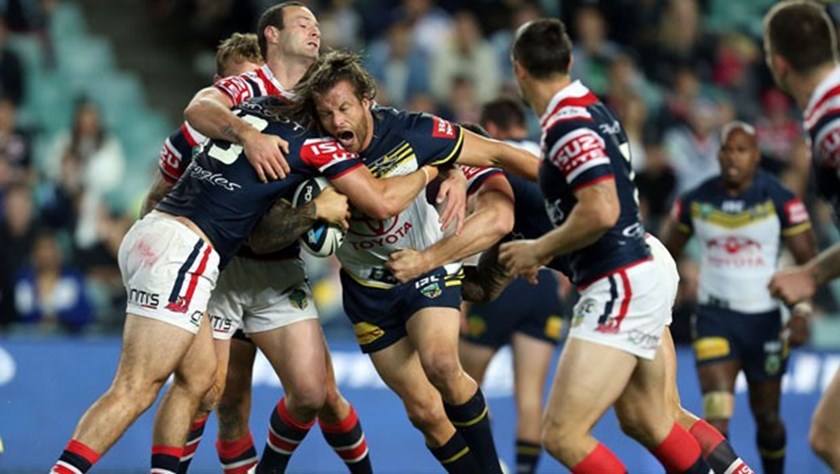 The Cowboys started with James Tamou, forcing Glenn Hall back to the bench. With Tariq Sims out of the 17 due to suspension, Ethan Lowe came in to sit as a reserve. The Roosters were 1-17 with Jake Friend and Aiden Guerra back in their lineup. 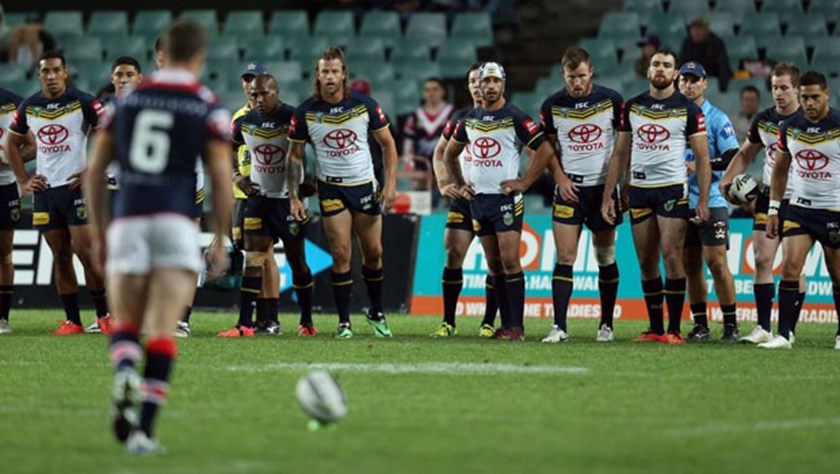 The Cowboys were rocked early thanks to Roosters halfback Mitchell Pearce who collected a final-tackle Michael Morgan grubber-kick on the full and then, with NQ’s quickest men too far away, ran 94 metres to score in the third minute.

James Maloney added the conversion for a 6-0 lead.

There was almost a quick hit back from NQ with Kyle Feldt looking to have grounded a Robert Lui cross kick just before the deadball line.

Referee Shane Hayne thought so, although he decided to send the final verdict to the video refs who overturned the decision, ruling Feldt’s hand had slipped off the ball.

The kick from the sideline from Maloney was on the mark to leave the Roosters 12-0 up at the midway point of the half.

Michael Jennings added to the Cowboys’ woes when he got his hand to a Maloney grubber-kick that Michael Morgan wasn’t able to clean-up under the crossbar, giving the Roosters three tries without a response.

After wasting a good chance at grabbing their first points by spilling the ball eight metres from the Roosters’ line, the situation became dire for the Cowboys when their troublesome right-side defence was exposed.

There were a couple of bad missed tackles as Tupou raced away for his second, leaving NQ 24-0 down.

When Maloney stepped back to his left, and brushed past two defenders, to score, the Cowboys were as good as gone even though there were 50 minutes left on the clock.

Trying to make a difference off the bench, Ethan Lowe did just that when he snared North Queensland’s opening try in the 34th minute.

He was on hand to grab the loose ball after Minichiello dropped a JT bomb under pressure from Morgan.

The co-captain’s conversion cut the deficit to 24.

Back-rower Gavin Cooper provided back-to-back tries for the revitalised Cowboys with his third of the finals series before the break.

In trademark style, he stormed into a hole off a Matt Scott pass and angled to his left to find the line.

JT knocked over the conversion, giving him eight from eight in his 2014 finals campaign, to cut the lead to 18 and restore some hope of an amazing fightback. 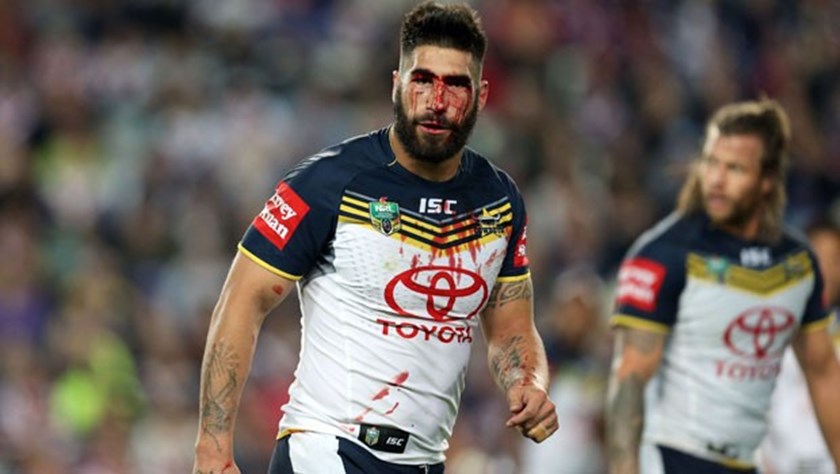 There was a third straight NQ try within five minutes of the restart.

A JT show-and-go saw him carve his way over for his 11th try of the season and give him an easy conversion to reduce the gap to 12.

The Roosters handed the Cowboys their next four-pointer.

The usually reliable Minichiello threw a desperate pass inside near his own tryline after barely saving a JT kick from going into touch.

Roger Tuivasa-Scheck was unable to haul the rolling ball in giving the chasing Robert Lui his chance.

Although there was doubt about the grounding, the referees and video referees saw enough, giving NQ their fourth try.

Thurston’s conversion took him past Josh Hannay’s 11-year-old club record for most points in a season (230).

Before 20 minutes of the half had clicked by, the Cowboys, amazingly, were level.

Matt Scott powered his way over from close to the line and Thurston converted for 30-all.

Maloney missed a penalty shot with 19 left and JT almost created another Cowboys try when he made a break up the middle but couldn’t find Morgan flying on his inside.

In a desperate final five minutes, Sonny-Bill Williams had a try call overturned by the video referees who surprisingly didn’t call a knock-on against the big Kiwi when he tried to find the ground in a group of Cowboys defenders.

Later in the same set, James Maloney slotted a field goal to put his team up by one.

The biggest drama was yet to come, however.

After seeing a Roosters kick roll dead, giving them a tap restart on their own 20 in the last two minutes, the Cowboys almost produced a miracle.

Kyle Feldt surged downfield, shedding tacklers with sheer determination before the ball found JT who raced to the tryline.

However pocket ref Gavin Badger saw a knock-on in the lead-up and advised referee Hayne to rule “no try” on the way to sending the play upstairs.

The video refs concurred that Robert Lui had knocked on when the ball came off his shoulder although there are plenty of people who would disagree.

Time ran out on an enormously brave and courageous performance from the Cowboys. 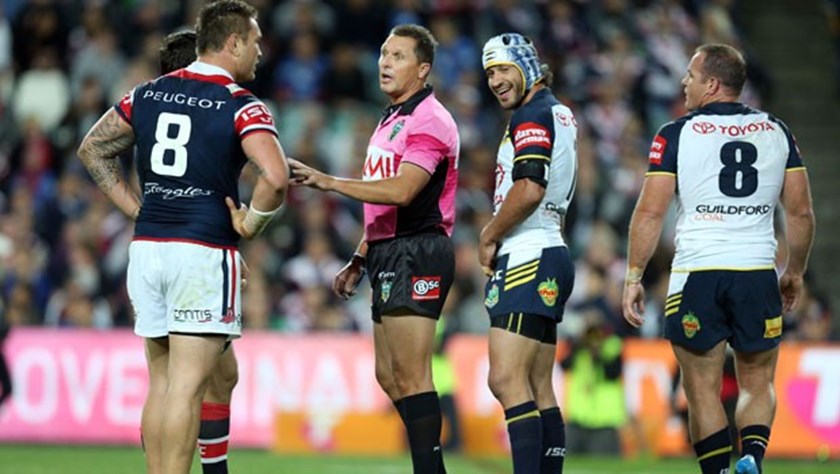