The highly impressive Toyota Cowboys locked in a home final and set a new club record for consecutive home wins by beating Manly 30-16 in their NRL home and away season finale at 1300SMILES Stadium tonight.

The largest home crowd since 2011 – 22,521 ecstatic members and fans – watched North Queensland run in five tries to three to ensure they can finish 2014 no lower than fifth on the competition table.

They can still grab fourth, and a double-chance in the finals, if Penrith lose to NZ Warriors on Sunday night.

That would set up a 1 v 4 showdown with the Sydney Roosters at Allianz Stadium.

If the Panthers are victorious at home, the Cowboys will host Brisbane in a knockout final in week one of the finals series.

On the night that the Cowboys officially farewelled Brent Tate, the victory was NQ’s 10th in a row at home and their first against Manly in seven attempts, denying the Sea Eagles the minor premiership.

The Cowboys were 1-17 while Manly were minus three players they named in the squad on Tuesday – fullback Brett Stewart, hooker Matt Ballin and prop Brenton Lawrence. Into the starting team came Clint Gutherson, Jayden Hodges and Jason King. Michael Chee Kam was the addition to the Eagles bench. 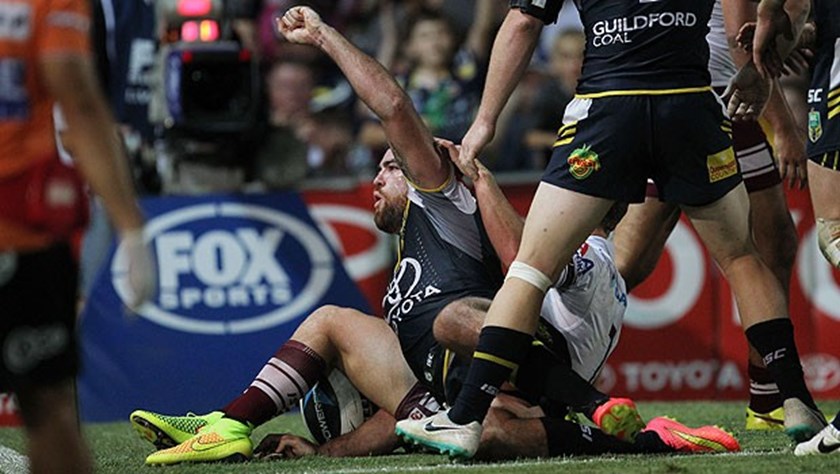 The first points of the night came from the boot of Johnathan Thurston – a fifth minute penalty goal to bring up 200 points for the season in the set after the Eagles were forced into the night’s first goalline dropout.

However the first try came from the Sea Eagles thanks to a raid down the left that ended with Steve Matai having a clear run to the line from a Clint Gutherson pass.

The Eagles had been put on the attack after Tariq Sims lost possession, and was taken off for concussion tests, after copping a huge hit from Jason King and Manly picked up a penalty soon after.

Outstanding once again for NQ in his first stint, Ashton Sims came close to breaking his two-year try drought with a charge that was just stopped short on the quarter-hour mark, but the Cowboys didn’t have long to wait for their first four-pointer.

It came from the club’s most potent try-scorer this year, Antonio Winterstein, who touched down for the 15th time this year – a personal best for tries in a season – after great hands on his inside from Kane Linnett.

JT missed the conversion attempt from the sideline to leave NQ 6-4 up.

Tariq Sims came back from his test after being given the okay and the Eagles had forward James Hasson put on report for a lifting tackle on Cowboys co-captain Matt Scott at the 20-minute mark.

The bigger blow for Manly, however, was a try to Kyle Feldt who climbed to take a Robert Lui bomb to give the home team a 10-4 lead that increased by two more with JT’s conversion.

Kane Linnett added the Cowboys’ third try of the half by finishing off a shortside move in the 37th minute.

JT's trademark sideline conversion took him to a new personal best for points in an NRL season – 204 – and left NQ 18-4 ahead at half time. 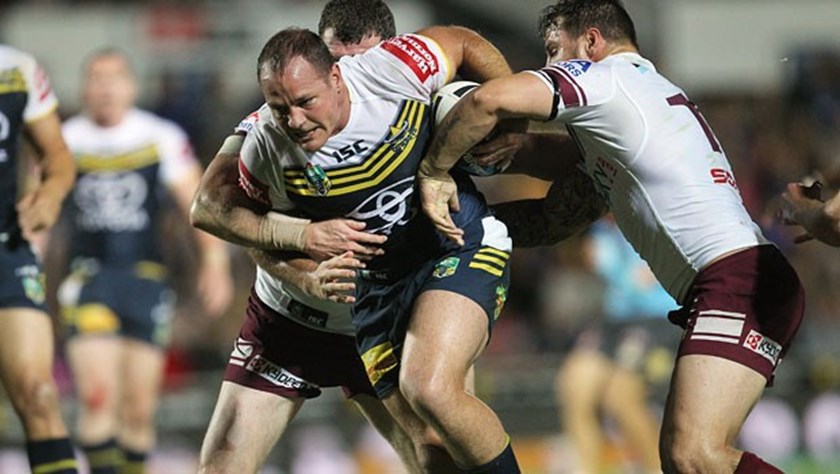 The Cowboys’ lead went past three converted tries in the 43rd minute after a fantastic ball from Robert Lui sent Feldt in for his second.

However there was a quick response from Manly who cashed in on a penalty awarded near the NQ line, with Kieran Foran putting Justin Horo into a hole for their second try of the night a couple of tackles later.

North Queensland’s next try was all down to Robert Lui.

He forced a goalline dropout with a delicate grubber into the Manly in-goal and scored in the resulting set, dummying to his right before going straight through the Eagles defence near the posts.

With Thurston’s fifth conversion of the night, the Cowboys had hit 30 with 24 minutes still remaining.

As NQ continued to dominate, Jason Taumalolo had a try denied by both the referee and video refs box when he was grounded with the try line in touching distance.

The night ended on a sour note for Ashton Sims who was put on report for a high shot with seven to go.

His finals fate may rest with the NRL match review panel.

Manly, who posted the last try of the night via Clint Gutherson, will face up to South Sydney in their opening finals match.

Matt Scott was again huge up front for NQ, collecting a game-high 187 metres, while Gavin Cooper topped the tackle count with 24.