A golden point extra-time field goal from perennial matchwinner Johnathan Thurston has sent the Toyota Cowboys into the NRL finals for the fourth straight year.

The one-pointer saw off a gallant Cronulla 20-19 at 1300SMILES Stadium to extend North Queensland’s home game winning streak to nine, equalling a club record set in 2005.

The last-placed Sharks, missing 19 players due to suspension and injury, managed to save the game in normal time with a long-range field goal from Daniel Holdsworth in the final minute that stunned the home crowd of just under 12,000.

JT’s match-winner, from around 10 metres to the left of the posts, came after the Cowboys were put into position by a huge Jason Taumalolo run with their first set of possession in extra-time.

North Queensland have now climbed to fifth on the ladder and, thanks to their vastly superior for and against record, have locked up in a top-eight position ahead of a Saturday night showdown against Manly.

The Cowboys could yet finish the season in fourth, and earn a double-chance in the finals, but they will need to beat the ladder-leading Sea Eagles and hope the NZ Warriors beat the Penrith Panthers in the last game of round 26. The Cowboys were 1-17 while the Sharks were minus two players who were included last Tuesday – hooker Michael Lichaa and forward Tirana Arona. Pat Politoni and Junio Roqica came in to the starting pack.

There was a Cowboys try within two minutes of the kick off and without the Sharks getting a touch of the ball, but it wasn’t a sign of how the first 40 minutes would pan out.

After being given a late penalty in their first set for a high tackle on Ashton Sims, it was Jason Taumalolo who crashed over for the opener from close range.

However, the 6-0 lead was soon wiped out with Michael Gordon breaking through up the middle to set up Pat Politoni for a try under the posts.

Gordon almost had a four-pointer of his own when he burst clear after some fantastic play from the Sharks inside their own half after they claimed a Johnathan Thurston kick.

The Cronulla No.1 was run down by a flying Michael Morgan and a play later Valentine Holmes was unable to ground the ball over the line in a desperate Thurston tackle – the on-field “no try” call confirmed by the video refs box.

However the Sharks did hit the lead on the 22-minute mark via winger Sosaia Feki who narrowly avoided the sideline before touching down in the left corner.

Two short kicks from JT pinned the Sharks for two goalline dropouts and the champion halfback produced a solo effort full of determination to get over on the half-hour mark.

The conversion made it 12-all, a scoreline that remained until half time. 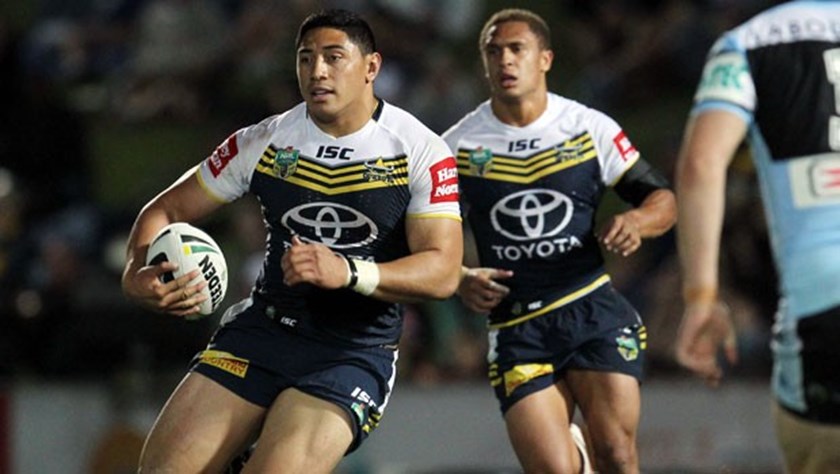 There were a couple of big defensive sets needed by the Cowboys early after the restart but they responded well and then nearly came up with a try to Robert Lui.

The NQ five-eighth tried to power his way over from close to the line but lost control of the ball just short – the on-field “try” call overturned upstairs.

Antonio Winterstein was then called on to make a try-saver on Valentine Holmes before the video refs entered the action again.

Jason Taumalolo was eventually awarded a four-pointer after picking up the scraps of a JT kick, with the Cowboys No.13 just managing to find the turf in a maze of Sharks legs.

JT calmly slotted a field goal with 5:15 left to make the difference seven but the Sharks managed to regain the kick off – the ball just rolling the required 10 metres – and cashed in with a second try to Feki.

Gordon added the conversion to get the Sharks to within a point and bring the contest alive again.

After failing dismally with his first field goal attempt, Daniel Holdsworth stepped up to provide a killer blow for Cronulla, nailing a one-pointer in the final 30 seconds from 45 metres out, sending the match in golden point extra-time. 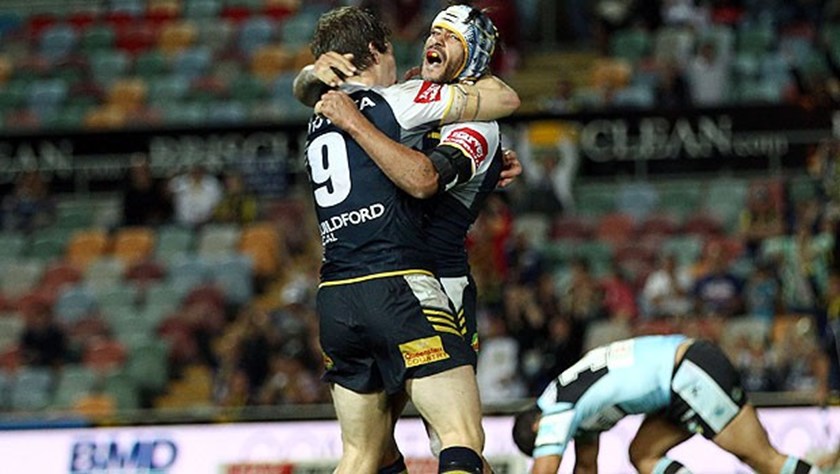