The Toyota Cowboys knocked over NRL premiership favourites South Sydney 22-10 at ANZ Stadium tonight in one of their best performances of 2014.

An almost perfect 16-0 first half set up the win which completed a season double against the second-placed Rabbitohs, who were trying to overtake Manly for top spot on the ladder.

It was North Queensland’s third away win in their last four starts and their second in a row at ANZ, the first time the club has achieved that feat since 2004 and their first away victory against Souths since 2006.

The Cowboys are now on 28 competition points and, thanks to their great for and against record, will probably seal a finals place with one win in their final two home games against Cronulla next Monday night and Manly five nights later.

They still have a shot at a top-four slot, but will need some other results to fall their way. 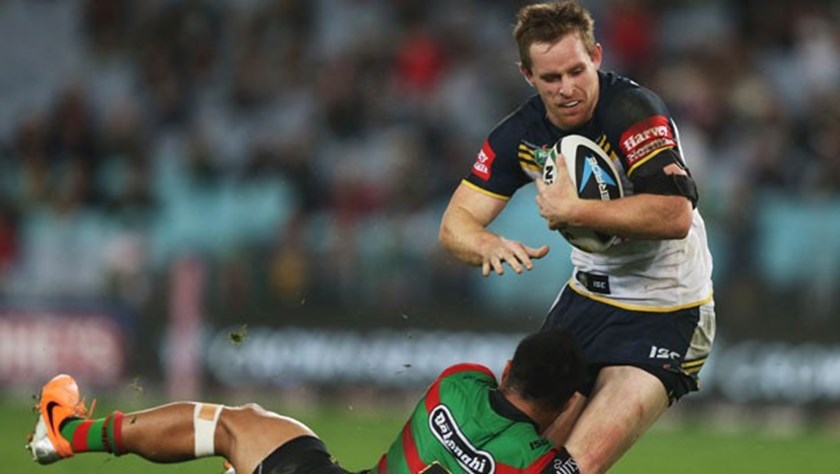 With Matthew Wright suspended for the rest of the season, Kyle Feldt regained a spot in the Cowboys backline on the wing with Tautau Moga at right centre. Gavin Cooper started in the pack with Glenn Hall dropping back to a bench that also featured James Tamou in his first game since round 20. Sam Hoare was 18th man. The Rabbitohs were 1-17.

The Cowboys applied all the early pressure and posted first points via a Jonathan Thurston penalty goal on eight minutes, after not being able to find a way through the Rabbitohs’ goalline defence.

The opening stages included Kyle Feldt receiving a good boost to his confidence when his first one-on-one battle with Greg Inglis ended with him throwing the Rabbitohs star into touch 10 metres out.

It was a storming Jason Taumalolo who came up with the first try of the night, producing an angled run to the line off an inside ball from JT on the quarter-hour mark.

Thurston dished up another try assist in the 19th minute to Feldt, who marked his return to the NRL with a diving try in the right corner.

It was the impressive Michael Morgan who had put the Cowboys deep into attack by returning a kick almost 80 metres a couple of plays earlier.

The Cowboys fullback pulled off a try-saver not long after to further demonstrate his value.

A confident Feldt had a double just before half time, jumping back on to the inside to take a pass from his centre partner Tautau Moga before stretching out to score.

JT’s conversion hit the post and bounced away, leaving the visitors 16-0 up at the break.

Still in the starting front-row despite James Tamou’s return, Ashton Sims was outstanding in the first half, mixing in 16 tackles with 107 hard-earned metres.

The Cowboys were a perfect 19 from 19 with the ball in hand. 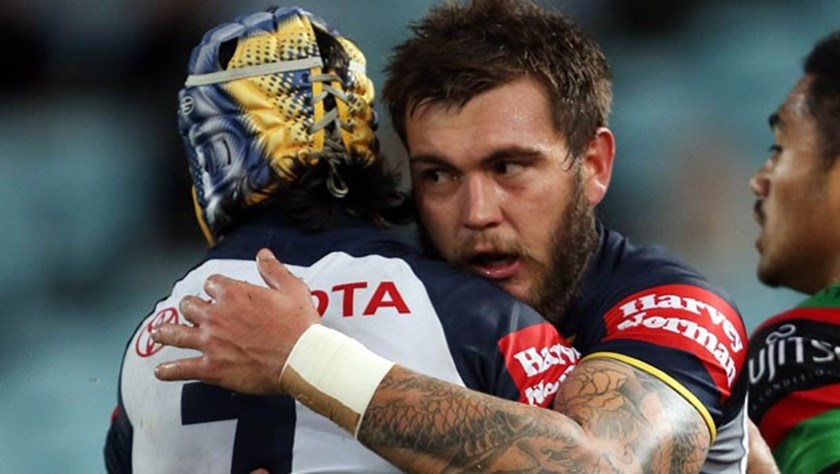 The Rabbitohs had almost all of the ball in the opening 10 minutes but couldn’t find a way through a dominant NQ defensive line, although there was a scare when Luke Keary nearly grounded a kick into the in-goal.

Called “no try” on the field, the video referees, after a series of replays, eventually agreed the five-eighth didn’t force the ball in the field of play.

After soaking up all the pressure, the Cowboys struck with their first meaningful attack of the half.

Michael Morgan jumped into the backline and hit Antonio Winterstein in stride, giving the winger a clear run to his 14th try of the season, equalling his career best.

Souths’ first points came with plenty of controversy – a clearcut forward pass that sent Joe Picker across was overlooked by the officials.

The Rabbitohs started making plenty of ground up the middle but weren’t able to post another try until some of their fans had started to leave.

Alex Johnston was the scorer – his 16th try in his rookie season – to cut the lead to two converted tries inside the final five minutes.