Winger Samsen O’Neill collected a double in the six tries to three victory that extended North Queensland’s winning streak to three and lifted them to within four points of the top eight midway through round 22.

It was clearly the Cowboys’ best defensive performance of the season and came against a team averaging an impressive 28 points per match seeking a season double against North Queensland. 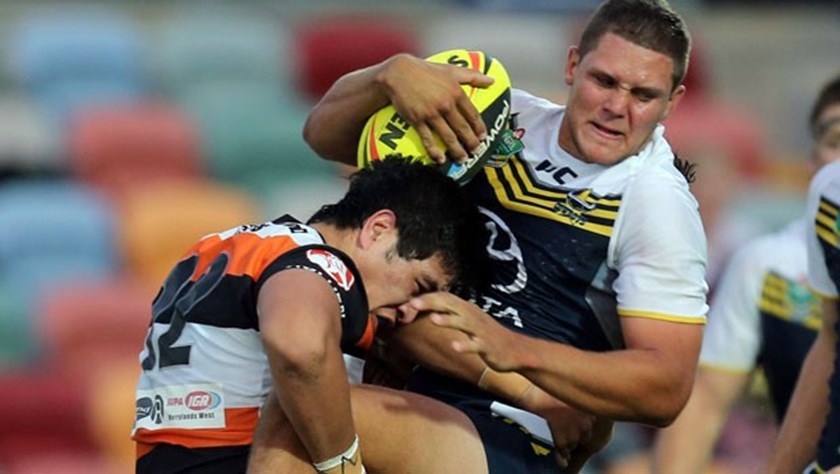 Late Cowboys inclusion Scott Schulte justified his call-up for the injured Akeripa Tia Kilifi, who pulled out in the warm-up with a groin problem, by snaring the opening points after just 13 minutes.

The left centre climbed highest to take a Cooper Bambling crosskick before managing to plant the ball in the in-goal despite being held by two Tigers defenders.

Corey Jensen nailed the conversion from near the sideline to put the Cowboys up by six.

It took the Tigers 25 minutes to gain their points and their try came on the back of a penalty given away by NQ inside their own half.

Lamar Liolevave, who was a danger throughout, cracked the Cowboys’ defence from close range, setting up a 6-all scoreline.

NQ’s second try was almost a repeat of the first.

Again Bambling kicked to his left on the final tackle, but this time it was winger Conor Carey who did the finishing work as the Tigers refused to go to the air to challenge for the football.

The visitors were penalised for being in front of the kicker from the resulting kick off and the Cowboys capitalised by adding a third try, via right winger Samsen O’Neill.

Jensen’s conversion attempt from touch hit the post and bounced away, leaving the home team 14-6 up. The lead went to 14 points within six minutes of the restart after Delayne Ashby forced his way over near the posts.

Liolevave was held up over the line by desperate Cowboys defence as he searched for a second try, but he managed to set one up soon after, smashing through the line before linking with winger John Ogden who won the race to the corner.

Viliame Kikau cancelled those four points with a strong running, solo effort from close range with 17 minutes to go, again putting the Cowboys out by more than two converted tries.

O’Neill clinched his double with 10 left after Kikau and Lenny Magey featured in the lead-up work.

The Tigers were a well-beaten unit by the time their final try arrived via Hala Masila in the final minute.