A Yamba Bowie field goal in the final minute was the decisive moment that allowed the North Queensland NYC squad to escape with a 31-30 win against the Gold Coast Titans at 1300SMILES Stadium this afternoon.

Down by 18 points in the first half, Titans captain Kane Elgey almost single-handedly lifted his team back into the contest with a hat-trick of tries, including a match-leveller with five minutes left.

Cowboys halfback Cooper Bambling, who was having one of his best outings in NQ colours, had a shot at field goal hit the upright and bounce away before Bowie managed to negotiate his attempt through the posts with 38 seconds left. Even then, the victory wasn’t secure with the Coast regaining the resulting kick off and then having a one-pointer from Elgey miss to the right as the siren sounded.

North Queensland’s seventh win of the year lifts them to 12th on the under-20s ladder, five points away from the top eight midway through round 21.

Trying to back up last weekend’s win against Canterbury, the Cowboys jumped to an 8-0 lead after scoring twice via their left-side attack in the opening 15 minutes.

Making his homeground debut, centre Akeripa Tia Kilifi created the first with an offload to winger Conor Carey and halfback Cooper Bambling set up the second, sending Coen Hess into a huge hole 10 metres out from the Gold Coast line. 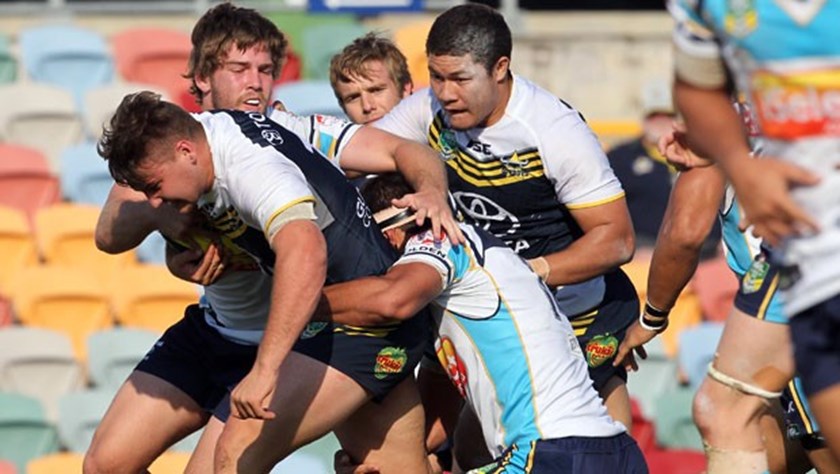 With the error-prone Titans completing a measly two out of their first nine sets of possession, it was impossible for them to mount any real pressure on the Cowboys line.

The home team continued to take advantage of an easier than expected opening, with winger Samsen O’Neill adding a third try when he claimed a crosskick in the 25th minute and Bambling backing it up with a dummy-half scoot to the line in Cowboys’ next set.

Corey Jensen was only able to convert Bambling’s try, giving NQ an 18-0 advantage.

There was almost another Cowboys try before the break and it would have been one of the best of the season had they managed to finish it off.

Seeing an empty backfield ahead of him, Bambling chipped and regathered near the 40-metre line and then kicked ahead again but Yamba Bowie, after outpacing the Titans defence, was unable to haul in the bouncing ball with four points beckoning.

The Titans eventually put points on the board in the 38th minute via centre Jayden Hawkes to go into half time 18-6 down and were also first to score in the second 40, through skipper Kane Elgey, to climb to within six.

A charge down and pass back inside from front-rower Viliame Kikau gave Hess the second leg of his double but the Titans soon hit back, scoring two tries in quick succession, to set up the exciting finish. 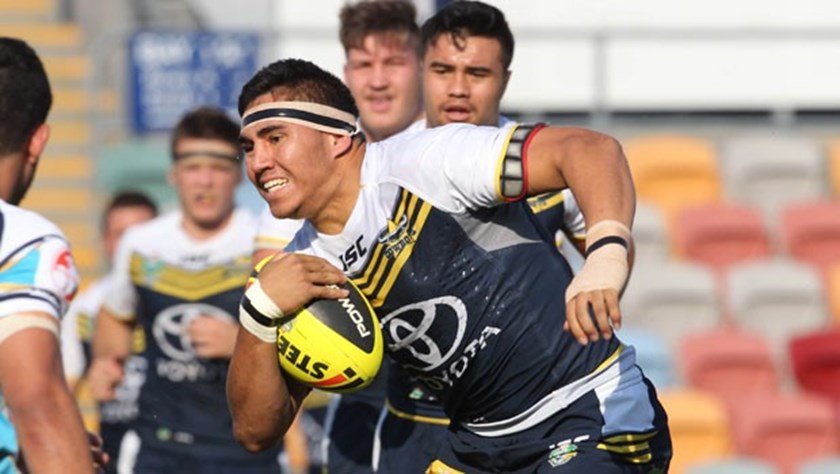