Despite having just a five-day turnaround from a Monday Night Football loss to Newcastle, the Toyota Cowboys defied the odds to beat South Sydney 20-18 in an NRL cracker at 1300SMILES Stadium.

In front of almost 16,000 members and fans, including a huge contingent of Laurie Spina Shield under-11s, the Cowboys held on for their sixth straight win at home after jumping to an early 14-0 lead.

It was NQ’s second straight victory against the fourth-placed Rabbitohs and moved them to within a win of the top eight.

Centre Matthew Wright scored a double for the Cowboys, but it was in the forwards that the battle was won.

James Tamou, who collected 172 metres in 18 hit-ups, was outstanding up front in the continued absence of his Kangaroos teammate Matt Scott. 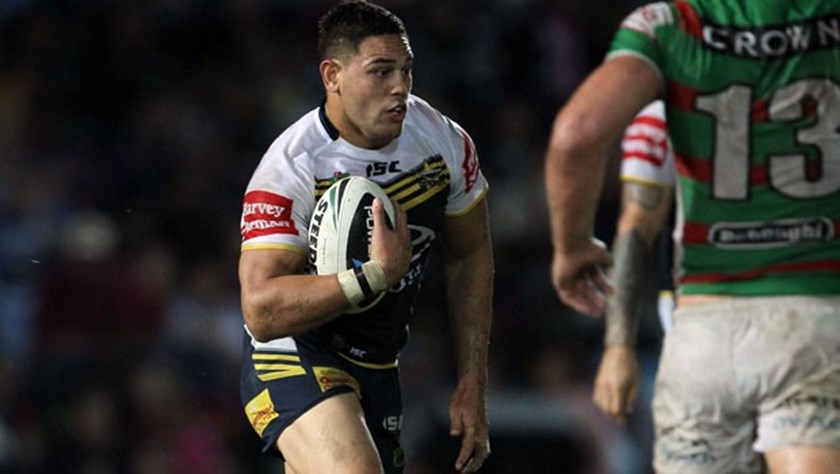 The Cowboys made one change to the lineup named on Tuesday, with Glenn Hall coming into the starting team and Ethan Lowe dropping back to the interchange bench. For the Rabbitohs, Bryson Goodwin came into the centres for Kirisome Auva’a in jumper number 18. Thomas Burgess moved into the starting side to replace brother George, who dropped out of the 17, with Luke Burgess coming on to the bench.

The opening Cowboys try came in just the second minute after Curtis Rona climbed above Nathan Merritt to tap back a Johnathan Thurston crosskick to Matthew Wright.

The NQ centre only needed to collect the ball off the ground and fall over the line.

Five minutes later and the start became even better.

Tariq Sims took a perfectly weighted JT pass and went through a hole in the Rabbitohs’ left edge defence to make it 10-0.

There was a third try before the 10-minute mark after the stunned Bunnies sent the kick off out on the full – Antonio Winterstein getting the nod from both the on-field and off-field officials that he successfully grounded the ball just inside the left sideline.

Eventually, the Rabbitohs worked their way into the contest and they were next to score thanks to a well-judged grubber kick into the in-goal by Adam Reynolds that Chris McQueen collected on the bounce to touch down.

The final verdict again came from the video referees’ box after it was ruled a try on the field.

Reynolds added the conversion to bring Souths within eight with 20 minutes gone.

The Cowboys’ fourth try of the half was the best of the lot.

Michael Morgan went blindside, kicked ahead and Curtis Rona flew through the air – much of his body over the sideline – to tap back the ball to an unmarked Matt Wright on his inside in the in-goal.

JT’s third missed conversion left the margin at 12 but it jumped to 14 thanks to a penalty in the 33rd minute. Souths needed to score first after the break and back-rower Jason Clark did just that, finding his way under the posts in the 47th minute to allow Reynolds to cut the gap to eight with the conversion.

There was almost a second for the visitors who were enjoying their best period of the night.

Had Alex Johnston managed to hold on to a Reynolds kick, the margin would have been down to four with still half an hour to play.

Chances for the Cowboys were limited but their defence was much improved on the Monday night loss to Newcastle.

That was until Greg Inglis strolled through the middle with 15 to go, only to be stopped by Morgan, and soon after the Rabbitohs were in when the Test and Origin fullback pounced on a short kick from John Sutton.

With their lead down to two, the Cowboys were well and truly on the back foot and were unlucky not to have a 40-20 kick from Thurston ruled in their favour.

That contentious call was compounded when NQ dropped a high ball 20m from their own line but they rallied under enormous pressure to keep the Bunnies out.

Curtis Rona came awfully close to sealing it for the home team inside a final five that was full of suspense.

The Cowboys played the dying minutes superbly, denying the Rabbitohs any late chances, to earn a well-deserved victory. 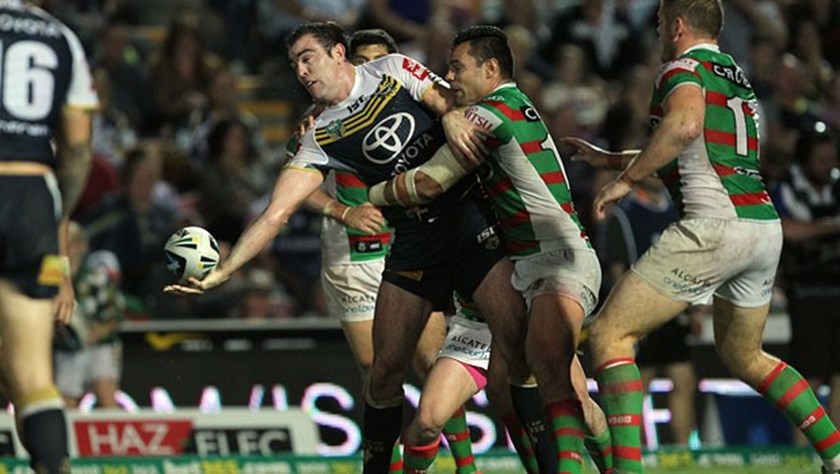